After working on the concept for several years, Saskatchewan-based seeding equipment manufacturer SeedMaster has built its first prototype drill with a single rank design.

While other air seeder frames have multiple rows or ranks of openers for seeding to create space for crop residue flow and the opener units themselves, the Ultra SR has everything mounted in a single row, similar to row crop planter.

“It is the first single rank, knife opening drill designed for large acre farming,” explains SeedMaster’s Anthony Biglieni in the video below.

The initial prototype, which was on display at Canada’s Farm Progress Show in Regina, is 60′ wide, with 15″ row spacing and a 700 bushel tank.

To prevent having crop residue build up and drag between the openers, SeedMaster has developed a spoked wheel system to move the trash through the machine. (Here’s a video on the ‘residue wheel’ concept filmed at the Farm Progress Show last year.) 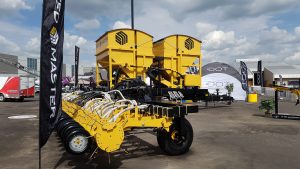 Advantages of the single rank seeder include easier access and significantly improved agility and ground-following, he says, noting “you’re not seeing any different tillage than with our traditional toolbar that uses our dual knife opener.”

The design evolved together with the creation of the DOT autonomous platform, developed by SeedMaster’s sister company, DOT Technology Corp.

“They had to develop a seeding unit that would fit int he DOT frame, and with that it had to be a single rank, so they had to think about different ways to deal with trash. That innovation has led to the innovation of the Ultra SR,” explains Biglieni.

The company plans to continue testing the unit this summer and fall.