Can you believe it’s already September next week? I know most people can’t…

The good news is, kids will be back in school, and Agriculture in the Classroom Canada (AITCC) is thrilled for school to start so teachers, parents, and kids can start using the new resources AITCC has developed.

Johanne Ross, executive director for AITCC, says within the 2017 school year, AITCC reached 471,000 students across Canada — a number that doesn’t include what each individual provincial program has done.

“Were pretty excited about the reach that we had honestly there;s so much left to do,” Ross says.

Back in June, AITCC launched its new website, and Ross says the feedback hs been positive. One feature, SnapAg, has 54 learning cards with graphics explaining various topics about the farm. 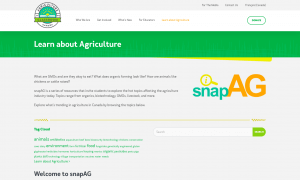 “We often have teachers and even high school students give us a call and say, “You know I’ve heard about these hot topics, like what are GMOs? What does biosecurity really mean?” … so SnapAg is a way for everyone to learn, in little bite sized pieces, about agriculture, and of course it’s accurate, balanced, and current information,” Ross explains.

Ross also hinted at a new portal on their website that’s going to be launched later week. The Canadian Educator Resource Matrix will be a tool where teachers from across Canada can go to and find ag related resources pertaining to their grades curriculum and that follow the provincial teaching guidelines.

Listen below to Ross speak about other initiatives AITCC has coming up in the future.