Chief Executive Officer & Director Remi is a proven Ag-Business leader with a true entrepreneurial passion. Experienced in driving revenue in agriculture, raising capital, structuring strategic partnerships, and building businesses. When it comes to knowing the agriculture industry he has a proven track record of success. In 2006, Remi and his brother took over the family Ag-retail (Dynagra) and starting incubating the next technologies in farming, resulting in the launching of Decisive Farming in 2011. Then in 2012 after growing revenue to over $30MM they sold the family business (DynAgra) to a fortune 500 company, CHS Inc. Today, Remi is leading the charge with Decisive Farming and focused on the next era of agriculture, the digital farm

These growing and changing demands need to be met by an agriculture industry that is facing labour shortages and rising costs for farm work. Many farmers are facing a dilemma between wanting to produce more, higher-quality crops and finding the workers to plant, maintain, and harvest those crops.

This tension isn’t new in agriculture. For all of human history, increasing agricultural production has been a function of either adding more labourers or finding more efficient tools to do the job. Modern agriculture is no different. In the face of labour shortages, farmers are turning to technology to make farms more efficient and automate the crop production cycle.

The growing interest in technology and automation is apparent in venture capital investments for ag tech startups. In 2007, according to TechCrunch, investors contributed US$200 million to a total of 31 ag tech startups. Ten years later, in 2017, total investment rose to over US$1.5 billion split between 160 startups.

These startups are addressing every aspect of the agriculture value chain. Some place remote sensors in the field to collect hyper-local data about growing conditions. Others create software to manage seed, soil, fertilizer, and irrigation, and make predictions about timing and yield. Some startups use drones to monitor conditions remotely and even apply fertilizers, pesticides and other treatments from above. A growing cohort of companies are working on agricultural robotics to build autonomous tractors, combines, and even fruit and vegetable picking robots.

Before you can automate farm operations, however, you need accurate data about the state of the farm. You also need a way for autonomous devices to connect with one another. This is the realm of the Internet of Things (IoT). IoT devices are the sensors, gauges and machines that are connected across a farm using Bluetooth, a cellular network, or some other type of connection. More IoT devices allow growers to collect more data about the state of their farms, and IoT is showing great promise for optimizing resource delivery and driving precision agriculture to achieve maximum efficiency.

For example, CropX is a company that installs soil sensors throughout the field to alert growers when soil conditions are outside the ordinary. A farmer might receive a notification that there is lower moisture levels in a certain part of the field. Given that information in real time, the farmer has an opportunity to correct the issue (in irrigation systems), to produce higher-quality and larger yields. Similar IoT sensor technology has applications in storage safety as well. OPI Systems’ sensors for silos and elevators, for instance, track conditions and send alerts when heat or moisture might damage grain, or when a fire is possible.

It’s not hard to see the value of small, connected devices throughout the farm for increasing efficiency and safety. It’s no wonder growers have taken to IoT so strongly. According to Business Insider, IoT device installations in agricultural settings are expected to increase at a 20% annual compound rate over the next few years. With more accurate and timely data, growers can spend less time out in the field assessing and diagnosing conditions, and more time working on solutions. 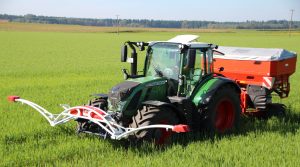 The data from these IoT sensors, combined with information about seed, fertilizer, pesticide, rainfall and other factors, presents a compelling use case for software to optimize and predict growing conditions. Running a farm is a complex operation, with dozens of factors affecting every decision. As data collected from farms grows each year, software algorithms can become more complex in their predictive analytics, helping farmers decide when, where and how much irrigation, fertilizer, pesticide or other applications their farm needs.

Software can also automate the frustrating task of resource tracking and management. For instance, some software and apps enable growers to record all field applications and then track these resources from the field to multiple storage locations and then to the elevator. This resource management data can be incredibly powerful for optimizing agronomics on the farm, and it creates marketing value for food and beverage companies to differentiate themselves.

IoT and farm management software are currently available and growing in popularity and sophistication. The next big frontier in agricultural automation is machines and robots that can do the work for humans. While most of these applications aren’t fully commercially available or are too expensive currently for widespread use, many companies are racing to develop autonomous machines that are cost effective and reliably complete farm tasks throughout the growing cycle.

Perhaps the most iconic image of farm automation is the self-driving tractor. Since 1991, John Deere has been working on autonomy for its tractors. While many of its newer models have autonomous features, like line keeping and depth adjustments, all of Deere’s models still require that a human sit inside. However, all major tractor manufacturers have plans and concepts in the works, for future full autonomy. Such a tractor that could be controlled remotely or even pre-programmed would provide significant savings in labour and input costs.

There have been significant advancements in automating tasks on the farm by smaller innovative companies. DOT Technology Corp’s autonomous, diesel-powered seeder follows predefined paths to sow an entire field without any human intervention. Rowbot is another company that has developed autonomous vehicles that can apply nitrogen between rows of corn and even sow cover crops under mature corn late in the season, before harvest.

In the UK, under human supervision, fully autonomous machinery planted, maintained and harvested a hectare of barley as part of the Hands Free Hectare project without a single human stepping in the field. While there were challenges with working in wet conditions and sacrificing some yield, the proof of concept project shows that it’s theoretically possible to grow and harvest many commodities without human intervention.

Automation doesn’t have to stop with tractors, and it isn’t limited to grains. Drones are gaining ground as autonomous vehicles that can provide information about the health of crops from above. They can quickly and cost effectively identify problem zones via imagery and infrared analysis and help farmers diagnose issues early on. Drones can also do some of the work typically left to airplanes or helicopters, dusting fields or even blowing water off ripe cherry trees after a heavy rainfall when the fruits are likely to burst.

Yamaha Precision Agriculture, for example, is testing a small, remote-piloted helicopter in Napa Valley that can spray fungicide. Vineyards in Napa often have tight row spacing and sometimes grow on steep hillsides. Until now, the only way to apply fungicide was for a farm worker to carry a backpack sprayer down the rows. Yamaha’s helicopter can apply the fungicide from above, simplifying, improving, and speeding the application process.

Harvesting fruits and vegetables also proves to be a difficult problem to automate, but several companies are up to the challenge. Harvesting robots must be gentle with the produce to avoid bruising and with the plant to avoid damage. Abundant Robotics has developed an early version apple picking robot that is gentle and precise. Another company, Energid, has a similar solution for picking oranges. Neither of these solutions is ready for primetime and the complexity of a real orchard. Time will tell if they turn into a viable, cost effective solution to a difficult problem.

It’s not outside the realm of possibility that the coming decades could see farms managed from afar, with less need for human manual labour and more emphasis on human intuition, management and decision making. However, it’s still clear that the human element of managing a farm is critical for the foreseeable future. Automation will enable farmers to scale their operations and be more efficient, but with all the complexities of weather and growing, it still takes human instincts and decision-making to run a modern farm.

Chief Executive Officer & Director Remi is a proven Ag-Business leader with a true entrepreneurial passion. Experienced in driving revenue in agriculture, raising capital, structuring strategic partnerships, and building businesses. When it comes to knowing the agriculture industry he has a proven track record of success. In 2006, Remi and his brother took over the family Ag-retail (Dynagra) and starting incubating the next technologies in farming, resulting in the launching of Decisive Farming in 2011. Then in 2012 after growing revenue to over $30MM they sold the family business (DynAgra) to a fortune 500 company, CHS Inc. Today, Remi is leading the charge with Decisive Farming and focused on the next era of agriculture, the digital farm