While the total land area isn’t necessarily the largest in Canada, B.C.’s agriculture industry tops the list when it comes to diversity and total economic impact, depending on the sector.

RealAgriculture founder Shaun Haney recently got a chance to interview the Honourable Lana Popham, British Columbia’s agriculture minister. The conversation is a part of RealAgriculture’s quest to explore agriculture from coast to coast. (Story continues below)

Popham says there are several distinctive geographic areas of agriculture production in B.C, that, when added together, amount to quite a large industry. She says,  “We have about three billion dollars in primary agriculture products, and about another almost $10 billion in food and beverage manufacturing. So I’d say we’re a big player.”

Popham describes the Province’s different growing regions and what each region grows. “We’ve got basically, a bread basket up north. We’ve got a fruit basket in the Okanagan. We’ve got the Caribou which (has) cattle. We have the Fraser Valley which (grows) a lot of vegetables and berries. We have Delta, which is getting close to the ocean, where we grow a lot of root vegetables, leafy greens, again, and blueberries. And then we have the island that produces a little bit of everything.”

B.C. does not have a food innovation centre. According to Popham, they decided they need to go in that direction, but that they need to go further. “We’re going to take it a step further and we’re creating a B.C. food hub network.” Food processing centres will be set up in these various regions so that each region can specialize and develop their own unique products.

Along with that, Popham says they will be able to connect consumers more closely to the primary producer. “We’re really embracing this great window of opportunity that we have, where consumers want to know where their food comes from.”

Popham gives a nice analogy to explain why and how they are rejigging their food production strategy. “You can’t build a house without a kitchen, and so we’re making sure we renovate that kitchen right now, in BC.” 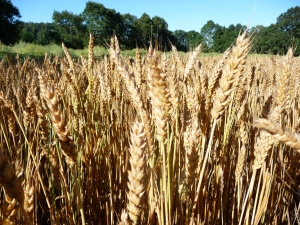 Why Do You Love to Grow Wheat?

Wheat is grown on more acres than any other crop around the world.  There is a wheat harvest happening somewhere in the world every month.  Having said all of that If I asked you, "Why do you grow wheat," do you know what your answer would be? Some people want you to believe that farmer's…Read more »

What’s next for Ontario’s processing-vegetable growers?