Unless you were under a rock, this was a wild week in politics, trade and agriculture in both Canada and the United States. It’s like Canadians and Americans are competing for the headlines on an hour to hour basis.

It’s that time of the week where we connect some dots with all the the info, data, and fast facts that were “left on the desk” this week:

It has been a tough couple weeks for science and technology, with Bayer reporting the number of glyphosate-related court filings in the U.S. has risen to 8,000 following the controversial California court jury decision two weeks ago. But scientists have made a big advance in the area of human health. Researchers at the University of British Columbia have discovered a process to create universal blood by using a specific gut enzyme. Essentially universal blood is being able to convert all blood types into type O, which will make blood transfusions safer and more abundant. Like most breakthrough research, commercialization takes time as the researchers believe we will not see the method available in hospitals for 5-10 years. Science…it’s a good thing.

I mentioned the 8000 cases involving the alleged health impacts of glyphosate that Bayer disclosed on a call with investors this week. Bayer definitely has its work cut out for itself as it tries to navigate the legal side of the glyphosate issue following the acquisition of Monsanto. The integration of the Bayer/Monsanto assets and teams isn’t even 30 days old and already people are wondering whether Bayer has buyer’s remorse. Clearly it is still too early to claim a verdict on the merger, but the lawyers are definitely chasing it in the meantime.

The courts are also very busy in the U.S. with immigration issues. If you want a great read to better understand the U.S. immigration issue written from a very objective perspective, check out Howard Buffet’s, “Our 50 State Border Crisis”

This past week there was a serious crime committed by an undocumented worker in Iowa. This is a very politically sensitive story that quite frankly both FOX and MSNBC have covered very poorly, with lack of transparency. I saw MSNBC telling viewers that family separation is a bigger problem and Fox News was saying that the solution would be the border wall. While Mollie Tibbitts family is grieving for the loss of their daughter, the Iowa farm that employed the arrested Cristhian Bahena Rivera are searching for answers as well. The farm is owned by a prominent Iowa Republican that employed Rivera for four years. The farm believes it was provided a fake alias and felt that they had done everything they could to hire legal immigrants. It is unclear at this point if the farm is in legal jeopardy but it will no doubt be a major wake up call to many farms across the U.S. to ensure they are following the proper verifications.

Immigration will no doubt be a Canadian election issue in 2019, but once again it was proven that sports can be unifying. This time it was a 12 year old boy getting his chance to play in the Little League World Series for Canada.

There is a firm misunderstanding by some people that G3’s sole purpose is to procure grain for Saudi Arabia. The union should lobby someone to fix the Churchill track first. https://t.co/ve9wTtG8HD 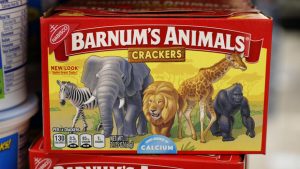 There were two stories this week that showcased how activists on both sides of the animal agriculture debate are way too extreme. Under pressure from PETA, the Animal Crackers box will no longer show the animals in cages. Nabisco stated that, [we] saw the change as an opportunity to continue to modernize the Barnum’s Animals Crackers brand.”  Before you scoff too hard at that one, consider the insanity of a pro-meat activist showing up at a vegan festival and trolling the plant lovers by walking around eating raw meat off the bone. Consider the fact that both decisions lack reasonability and are not appealing to people in the middle of the conversation.

We have focused lots lately on being able to access certain products and technologies for controlling pests and diseases due to eroding public trust. What about product access being limited due to trade issues? That is the very concern of the UK agricultural industry.  The UK agri supply chain is ensuring that certain crop protection and animal health products cross the English Channel to be stockpiled just in case the UK and EU do not negotiate a BREXIT deal in time for the 2019 growing season. The fear is increased tariffs and a thicker border due to more diligent inspection by border authorities.

Speaking of trade, this has not been a great week for trade talks. Canada is still on the sidelines of NAFTA clearly by the choice of USTR Robert Lighthizer. China officials left the U.S. with a cool tailwind behind them and Mexico never got its handshake. Admittedly I have followed global trade very close in the last 18 months and I have learned a lot from some incredibly bright minds that live and breathe this stuff their entire careers. Truthfully not much has really happened since many of these negotiations started, but in reality that is what trade negotiations were before Donald Trump. They were slow, grinding, boring discussions with little media attention and fanfare. President Trump marketed himself as a deal maker that clearly loves negotiating, but his weakness so far has been closing a deal.  As the president searches for a win with his unconventional strategies, some are beginning to see the president’s trade talks as fake.

Keep your eye out for the details of the USDA’s US$12 billion trade aid package on Monday. Kelvin and I broke down some of the considerations from a Canadian agriculture perspective for you.

Supply management was back in the headlines what with Maxime Bernier deciding to withdraw himself from the Conservative Party of Canada and start his own federal party. He was all on his lonesome with no elected MPs as of yet having joined him. It reminded me of the movie Jerry Maguire in that famous scene where Jerry leaves the firm and ends up taking the fish with him because none of his fellow agents will jump to his team.

Don’t expect Maxime to go away quietly, but he does have a big uphill climb to form this new party. Bernier has a reputation for being a lone wolf and not a terribly hard worker. Robert Fife of the Globe and Mail shared a story this week that it used to drive Stephen Harper nuts that Bernier would fall asleep in meetings regularly. Current Calgary MP and Immigration Shadow Minister, Michelle Rempel was quoted as saying, “If Max works as hard in his new party as he worked when he was in the Conservative Party, we have nothing to worry about.”

As my mom would say, you should not cry over spilt milk……..

We are one week away from the beginning of college football season and I am very excited. If you do not get a chill watching the below video, you do not have a heart beat.

I may be excited to watch a new season of college football but less people are excited to play it. Due to concerns over CTE, 7% fewer high schoolers are playing high school football than in 2009. We joked earlier about eliminating the bars on the animal cracker box, but is football slowly being eliminated from our culture the way circus animals have disappeared?

If high school kids are playing less football and illegal immigrants are being deported at record rates according to U.S. President Trump, maybe the high school kids can work on the farm. But wait this actually happened in the 1960’s.  The US government recruited 20,000 high school students to replace immigrant Mexican labour.  One of the recruitment slogans was “Farm Work Builds Men!” A very interesting story that is relevant today.

And finally, the below video is epic for many reasons. The WSU Cougars are my team and it’s my column so I can do whatever I want. Plus it’s hilarious.

Left on the Desk, March 13: COVID-19, a run on toilet paper, and an intolerant India