The U.S. government announced details of its $12 billion trade aid package on Monday, including nearly $4.7 billion in direct payments to American farmers based on their 2018 production.

“Early on, the President instructed me, as Secretary of Agriculture, to make sure our farmers did not bear the brunt of unfair retaliatory tariffs. After careful analysis by our team at USDA, we have formulated our strategy to mitigate the trade damages sustained by our farmers. Our farmers work hard, and are the most productive in the world, and we aim to protect them,” said U.S. Ag Secretary Sonny Perdue.

These initial payments will be based on 50 percent of a producer’s total 2018 actual production multiplied by the applicable rate: 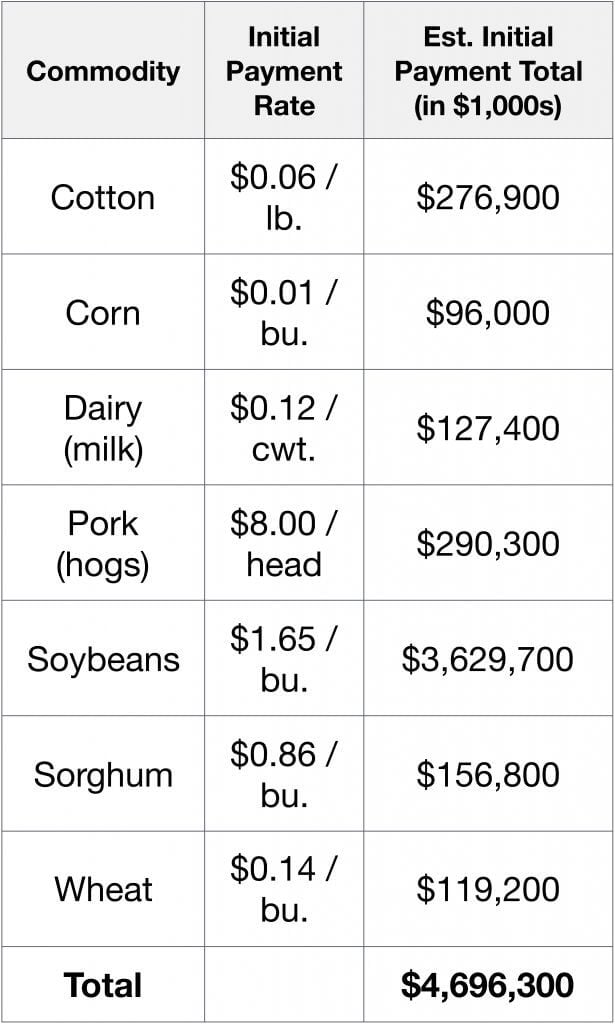 The USDA says a second payment rate will be announced on the remaining 50 percent of production, if warranted.

For hogs, the payment will be based on the number of head on August 1. Dairy producers’ payments will be based on historical production reported for the dairy margin protection program using the  highest annual milk production marketed during the full calendar years of 2011, 2012, and 2013.

In addition to the direct payments to producers, the USDA will be spending up to $1.2 billion on a food purchase program for commodities that can be distributed through nutrition assistance programs.

$200 million will also be made available for trade promotion programs to help develop foreign markets for U.S. agricultural exports.

The reaction to the trade aid announcement among U.S. commodity groups is mixed, with some welcoming the support, while others are saying they would prefer to have open trade, and that the payment rates fall short of the impact of retaliatory tariffs.

“We welcome USDA’s announcement that soybean farmers will receive a payment on their 2018 production to partially offset the impact of China’s tariff on U.S. soybean imports. This will provide a real shot in the arm for our growers, who have seen soybean prices fall by about $2.00 per bushel, or 20 percent, since events leading to the current tariff war with China began impacting markets in June,” says American Soybean Association President and Iowa farmer John Heisdorffer.

While wheat growers will receive a payment of $0.14/bu on 50 percent of production, NAWG estimates the trade battle with China has caused a $0.75/bushel price decrease for wheat.

The National Corn Growers Association shared a similar response, estimating that corn prices have dropped by $0.44/bu for 2018 crop, while the USDA’s payment rate is set at $0.01/bu.

“While most members prefer trade over aid, they support relief if it helps some farmers provide assurances to their local bankers and get through another planting season. Unfortunately, this plan provides virtually no relief to corn farmers,” says NCGA President and North Dakota farmer Kevin Skunes.

Related: What to watch for as the U.S. announces trade aid details

U.S. farmers could see $2/bu for soybeans in second government pay out