Attendees of Canada’s Outdoor Farm Show, at Woodstock, ON, were treated this week to North America’s first look at DeLaval’s VMS V300 in action.

RealAgriculture’s Bernard Tobin was there, and spoke with Francisco Rodriquez, DeLaval marketing manager, robotic milking/feeding, to get a full run-down on what the new voluntary milking system has on offer. 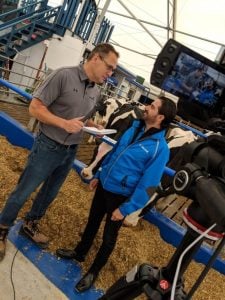 Rodriquez says, “(The VMS V300) allows us to treat each farm, farmer, cow, even each teat — individually.” The V300 offers a 10 per cent higher capacity than the previous line, and has an up to 50 per cent faster attachment time.

The milker attachment rate and teat spray hit rate both top 99%, Rodriquez says, with real quarter milking, and lower running cost than earlier systems. In the video below, he shares how the entire voluntary milking system has been redesigned for precisions milking, cleaning, and milk flow.

Also featured on this line is DeLaval InControl, the new user interface that allows full connectivity for the farmer — from remote access to information and control of the entire system.

Growing the family farm in the face of tragedy

Have you ever been to a farm meeting and there is a speaker talking about the cost of production?  Do you ever feel like they are speaking no different than the teacher in Charlie Brown? Farming is business and businesses need to know their cost of production.  Guessing your cost per acre is just not…