Very concretely, StatsCan is using the Canadian harvested acreage number from August report (based off a July farmer-survey) and then are multiplied by corn yields derived by satellite data taken on August 31st. Digging deeper, as per the methodology description available to us from StatsCan, yields and production estimates are the based off coarse resolution satellite data, StatsCan’s previous August estimates, and agroclimatic data.

Take a look at how much bigger yields got from the August StatsCan report to this past week’s September satellite-based ones. 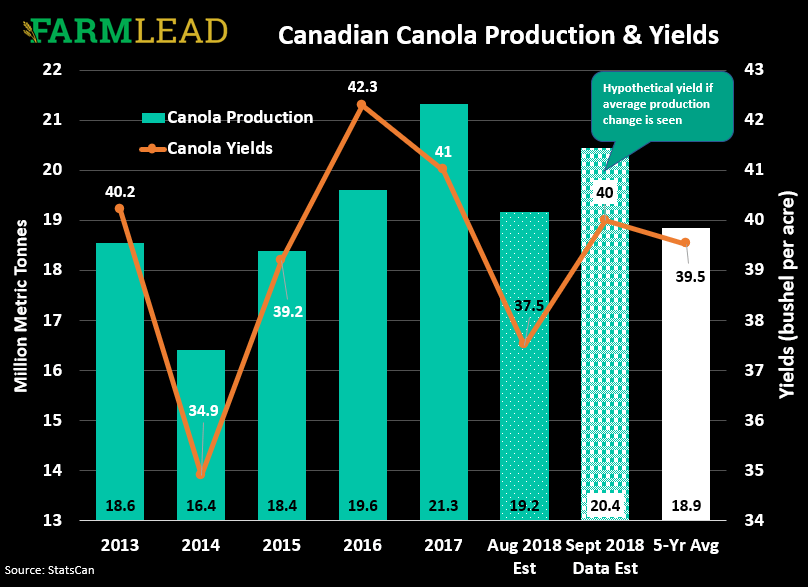 These numbers from StatsCan though are a bit suspicious. It is possible that canola yields could jump 3.6 bushels per acre, and durum and spring wheat could improve by 4 and 3 bushels per acre respectively? Indeed, certainly questionable.

That said, I’m also incredibly biased (like everyone else) to recent weather events, with the knowledge that the Aug 31 harvested acreage number is quite unlikely. Considering that StatsCan uses the number from the July-based survey results is a bit odd. It literally seems that StatsCan came up with their production number, and then just did the math, dividing production by harvested acres to get their yield numbers.

Also, this past week, we got updated supply and demand tables from Agriculture Canada. However, because their production numbers were based of Statistics Canada’s August 31st report, the tables are basically unreliable at this time.

Worth noting though was AAFC dropping feed barley use, flax prices increasing despite exports being felled by one-third to 400,000 MT, and canola exports also falling 500,000 MT from the previous estimate to 11 million metric tonnes (MMT). Ag Canada also dropped Canadian canola production to the 19.2 MMT seen in the August StatsCan report. 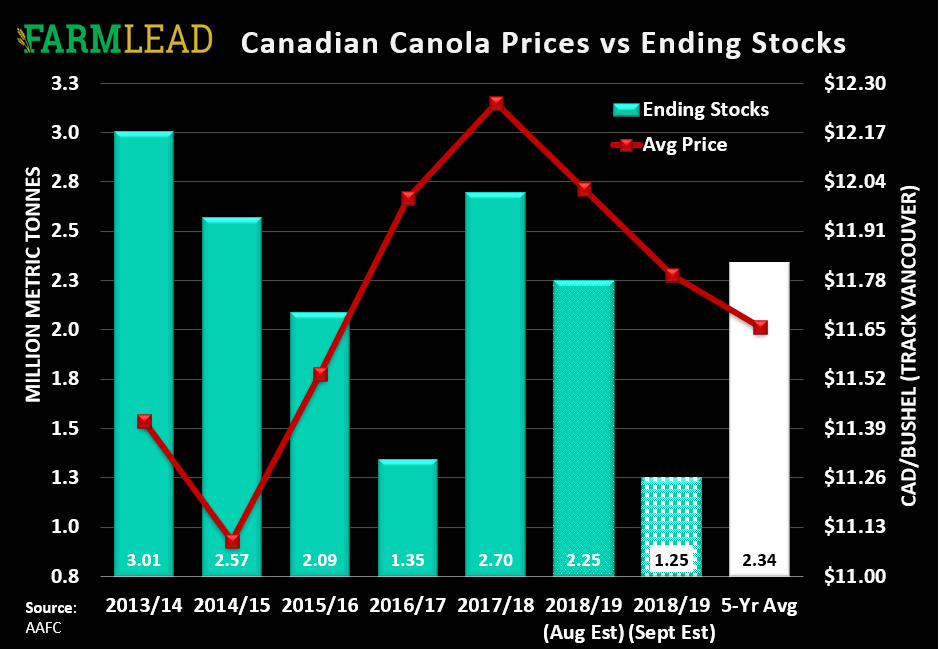 Considering that StatsCan just upgraded the canola production number by nearly 2 million to 21 MMT, one could probably make the assumption that 2018/19 Canadian canola carryout won’t be as tight as Agriculture Canada is currently suggesting.

For soybeans, the November 2018 contract in Chicago gained 17 cents for the week to finish at $8.473. This was namely due to some positive U.S. export data and rumours that Argentina is being used as a conduit for American soybeans to get to China. As a reminder, Argentina is the largest exporter of soymeal in the world, but last year’s drought there caused a supply issue. Thus, Argentina must import product to keep pace with the demand, especially that coming from America.

On that note, it is still a little dry in Argentina. This past week, the Buenos Aires Grain Exchange says that 42% or wheat acres in the country had below normal or poor soil moisture. Much like Argentina, the Australian wheat crop continues to be have production problems, with the most recent being frost hitting Western Australia. Some estimates have put crop losses in the state at 1 MMT.

That being said, Chicago and Kansas City winter prices gained about a dime this week, with the December 2018 contracts for the two crops closing Friday at $5.218 and $5.253, respectively.

On the trade war front, it seems that China and the U.S. are going to play an endless game of tariffs, which only will negatively impact consumers more than anything. To be clear, trade wars don’t happen between countries, they happen between consumers.

This in mind, China has told its consumers that “what China really should do is focus on doing its own thing well.” This means that the Chinese government is looking to promote localization (as a means to replace imports).

In North America, the U.S. wants text of an updated NAFTA completed by October 1st to help get it passed by Mexican legislators before their new incoming administration takes over in December. Disagreements between Canada and the U.S. over dairy, dispute resolution, and cultural protections continue

Finally, corn prices finished in the green this week as traders shrugged off harvest pressures and kept a close eye on export levels. A dry crop in Europe also offered a slight boost, as both front-month December 2018 and next-month March 2019 contracts added 1.6% on the week to close at $3.573 and $3.693 USD / bushel respective in Chicago.

As the U.S. corn harvest is about to pick up steam, there is already talk of 2019 acres. Informa Economics estimates 2019 US corn acreage will rise by more than 4% year-over-year to 93.044 million acres. Using a yield of 178 bushels per acre, they estimate 2019 production at 15.256 billion bushels. If realized, this would be a new corn production record in the U.S.. Keep in mind that the last 6 years already account for the six largest corn crops in American history.

Ultimately though, that’s still a ways away and the market is focused more on the near-term issues – i.e. the lack of progress in Western Canadian fields because of cool, wet weather. Snow and rain continue to fall in parts of Saskatchewan and Alberta, which is certainly negative and will likely put some pressure on feed grain prices.

Conversely, is there enough higher quality product to meet milling demand, both domestically and abroad? For example, Agriculture Canada is forecasting that non-durum wheat exports in 2018/19 will only increase 1% year-over-year. However, currently they’re tracking about 22% higher.

To wrap things up, there’s a lot more question marks than answers, especially after some questionable market reports. The main pressing one is, how does StatsCan become more credible that the grain markets actually believe their numbers?

Dropping Surprises — This Week in the Grain Markets

Buy the Rumour? A Look at the Markets this Week