The federal government is investing up to $12.1 million over the next five years in a new canola research cluster under the new Canadian Agricultural Partnership.

Provincial canola grower groups — Alberta Canola, SaskCanola, and the Manitoba Canola Growers — and industry are contributing another $8.1 million, bringing the total funding for 25 research projects in the canola cluster to around $20.2 million.

“Canola is going to continue to grow, and grow rapidly. It’s a very valuable product, and you need innovation and research. That’s exactly what this is about,” says MacAulay in the audio below.

The Canola Council of Canada says the 25 projects will focus on the following priorities:

The $12.1 million commitment by the federal government follows a $15 million investment in the previous five-year canola research cluster under Growing Forward 2. 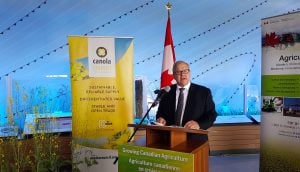 Canola grower and industry groups have voiced concern about the potential impact of Health Canada’s recently proposed decision to phase out the use of several neonicotinoid (neonic) seed treatments, including one that is a valuable tool for protecting canola seedlings from flea beetles. Similar regulations in Europe have resulted in a dramatic decline in canola acreage.

MacAulay notes the proposed neonic ban is still open to consultation, and that he has confidence Health Canada’s decision will be based on the best available science.

“What we all want to make sure is the decision-makers have the scientific information to make the proper scientific decisions. That’s what will take place,” he says.

Below is the post-announcement media scrum with Minister MacAulay, where he discusses the canola research funding, the proposed neonic ban, NAFTA negotiations and possible concessions on dairy, as well as CPTPP ratification plans and, after nearly 30 years as an MP, whether he intends to run again in the 2019 election:

Identifying Spray Quality with a Smartphone

Chinese drone manufacturer DJI is introducing a spraying model to North America, as it foresees a day when farmers use swarms of unmanned aerial vehicles (UAVs) to control weeds, diseases and other pests. The Agras MG-1 is an octocopter capable of carrying 2.5 gallons and covering 7 to 10 acres per hour, explains DJI's Jan…