On Wednesday, September 12th the USDA came out with one of the most bearish World Agricultural Supply and Demand Estimates (WASDE) reports in recent memory, destroying any pre-report expectations — especially for corn and soybeans.

Going into the September WASDE report, the market was already quite bearish on soybeans, expecting to see 2018/19 ending stocks in the U.S. top 800 million bushels and 100 million metric tonnes (MMT) globally.

However, the numbers turned out to be even more bearish than analysts expected. Not only did U.S. soybean stocks hit an astounding 845 million bushels, but global stocks popped another 2.7 MMT to touch just north of 108 MMT, up 14 per cent year-over-year. 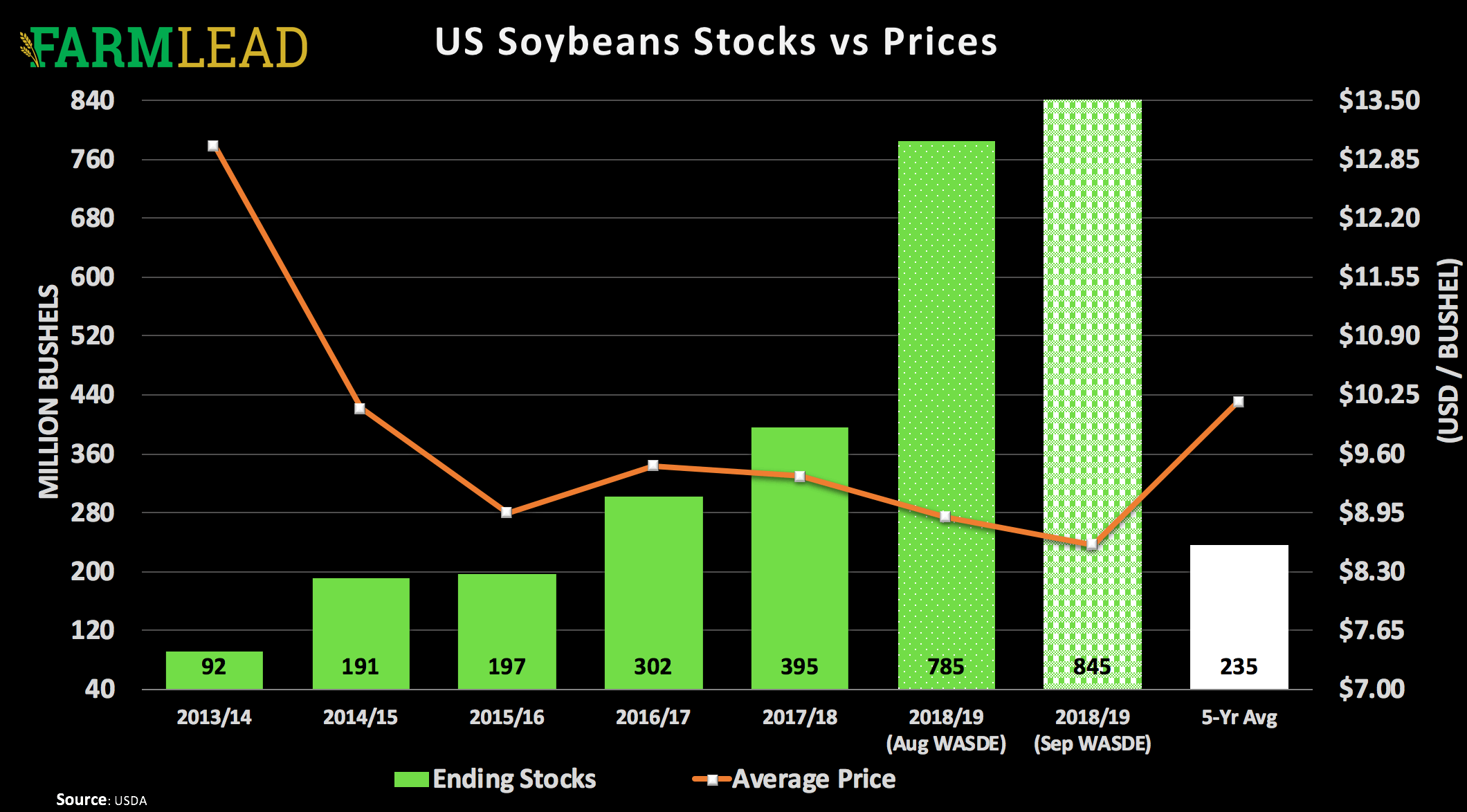 For the domestic number, this is thanks to American farmers producing a record yield of 52.8 bushels per acre, up 1.2 from last month’s report and about 0.5 higher than what the market was expecting. This adds up to a record U.S. soybean crop of 4.693 billion bushels (or 127.73 MMT).

That being said, soybean prices lost 14 to 15 cents USD per bushel this week in Chicago. The November 2018 contract finished a bit above $8.30, down 1.7 per cent on the week, while the January 2019 soybean contract closed 1.6 per cent lower from last Friday at $8.44. Further, the November 2019 contract lost nine cents to close below $9 or $8.916 for the first time ever. With that in mind, we saw many elevators in North Dakota this week go either no bid on soybeans for the cash trade, or something with a $6 handle on it (cue the opening of your favourite adult beverage now).

On the corn front, the USDA was even more bearish.

Going into the report, the average pre-report guesstimate for U.S. corn production was 14.27 billion bushels off an average yield of 177.7 bushels per acre. However, the USDA is now suggesting that average American corn yields for the 2018/19 crop will be 181.3 bushels per acre.

This means 2018/19 corn production should be the second-largest on record at 14.83 billion bushels. That’s also 560 million bushels more than what the market was expecting to see.

Worldwide corn carryout was estimated by the USDA at 157.3 MMT, which is a healthy decline of 19 per cent year-over-year, but the entire decline is basically being attributed to China working through their massive stockpiles.

For corn prices, front month contracts in Chicago lost 16 cents USD / bushel this week, or down about 4.3 per cent. The December contract closed at just under $3.52 while the March 2018 finished at a touch below $3.64. Worth noting is the December 2019 contract that continues to be resilient, losing only seven cents this week to close at $3.90.

Meanwhile, canola prices were able to weather the storm a bit, losing than one per cent for the week but the November 2018, January 2019, and November 2019 contracts are all sitting below $500 CAD / MT. Why?

The USDA stayed in their bearish ways, leaving the Canadian canola production number unchanged from August’s estimate at 21.1 MMT. Compare this against StatsCan’s August estimate of 19.2 MMT of canola production. Next Wednesday, on September 19th, we’ll hear from StatsCan again for their satellite-based crop production estimates.  For perspective, in the last 3 years that this sort of report has come out, the Canadian canola crop has been increased by an average of 1.279 MMT from what they said in their August 31 report.

This explicitly means that, compared to StatsCan’s report from three weeks ago of 19.2 MMT of Canadian canola production, this next StatsCan data-infused estimate could come in at 20.44 MMT.

U.S. canola production was pegged by the USDA at 67 million bushels (or 1.52 MMT). More globally though, the USDA revised total rapeseed production lower, include declines in Europe and China. Strong domestic crush and exports should continue to help Canadian canola prices, but we must keep in mind that canola is very expensive to soybeans right now.

U.S. flax production wasn’t actually estimated by the USDA, but we do know that they think harvested acres will be just 160,000. This is down 41 per cent year-over-year and 49 per cent below the five-year average.

Getting into wheat, we saw a surprising upgrade to the Russian crop by three MMT, now estimated to be at 71 MMT. Keep in mind that this is still 14 MMT below last year’s record haul. The USDA downgraded both Canadian and Australian crops to 31.5 MMT and 20 MMT respectively. However, these numbers are both bigger than the 29 MMT of total wheat production estimated by StatsCan and the 19.1 MMT forecasted by ABARES this week.

In the U.S., 2018/19 hard red spring wheat ending stocks was lowered by 10 million bushels from the August estimate, despite production being stayed at 583 million bushels (or 15.9 MMT). Food for thought: U.S. HRS wheat carryout has now being lowered by a combined 31 million bushels in the past two WASDE reports.

Global oats stocks came into focus for our GrainCents readers in this September WASDE, while the USDA kept its 2018/19 production number at 66 million bushels. We also saw the USDA lower 2018/19 global barley ending stocks to just under 18 MMT. 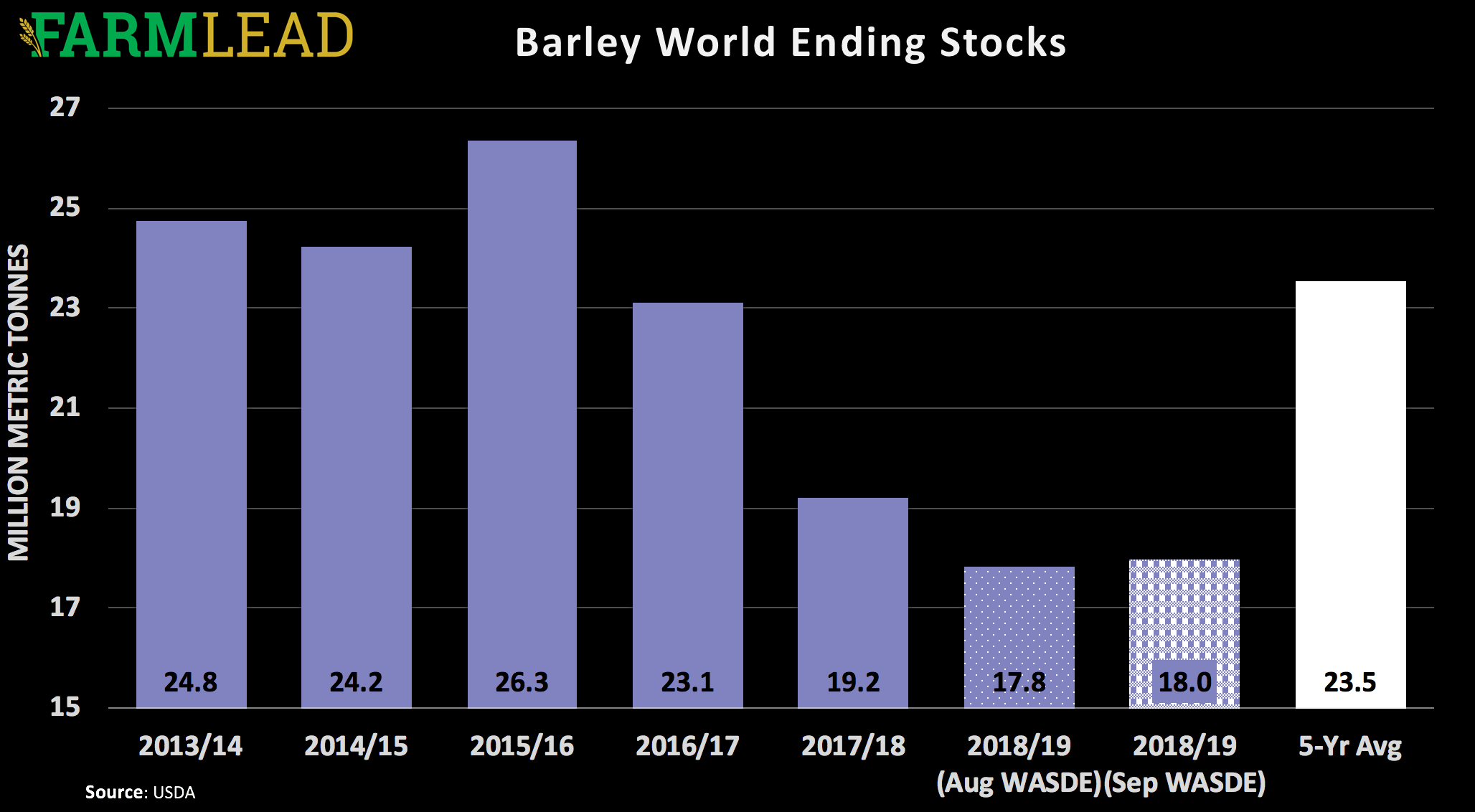 Rounding out the September WASDE, U.S. durum ending stocks were raised by five million bushels to 36 million (the same as last two years!). We also now know the USDA expects U.S. peas production to drop just 2.1 per cent year-over-year, harvested U.S. lentils acreage will fall 26 per cent, but the U.S. chickpea crop will likely more than double in 2018/19.

Despite the bearish nature of the USDA’s WASDE report this month, we’re seeing a lot of social media posts of the negative weather (read: snow) impacting Harvest 2018 in Western Canada. This obviously brings back the memories of the battle of Harvest 2016.

From a price direction, something to keep in mind here is that back in the 2016/17 crop year, grain prices didn’t rally as much as everyone was hoping, meaning we should keep our expectations in check.

Second, it became really important to get your grain tested and know your quality. We’ve built a simple tool called GrainTests.com to help you do just that.