Nearly 50 scientists and regulators with Health Canada’s Pest Management Regulatory Agency (PMRA) hopped on a pair of buses a few weeks ago and spent a day in the field 45 minutes from Ottawa learning about how the crop protection products they regulate are used by farmers.

The first-ever PMRA field day, held on a farm near Winchester on August 22nd, was organized by the Association of Equipment Manufacturers (AEM), and co-hosted by the Canadian Seed Trade Association (CSTA) and Grain Farmers of Ontario.

“The purpose of the day was really to give the regulators a sense so that when they’re looking at things through their microscopes, through their very detailed, specific field of focus, they can see how the bigger picture plays out and how the products they regulate are ultimately used on-farm,” says Dave Carey, CSTA executive director. 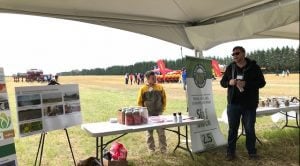 The event was modelled after a similar field day that AEM hosts annually for U.S. regulators near Washington, DC.

We ran into the planter expert who demonstrated the vacuum planter to PMRA employees down at the Farm Progress Show in Iowa last week. 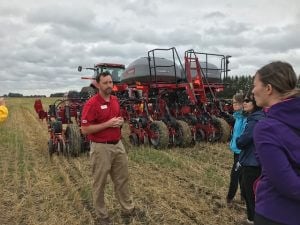 “Basically I led them through how the planter works, specifically how the seed meter works and how we handle seed,” explains Tony McClelland, planter marketing manager with Case IH, in the video below.

McClelland says the PMRA employees were also interested in how farmers use GPS.

“When they start to understand it’s more than just steering the tractor — we’re making maps, we’re variable rating seed and fertilizer, we’re sensing the ground and making layers of maps to make decisions on — I think that was very eye-opening,” he says.

Carey notes it was entirely coincidental that the field day was held a week after the PMRA announced its proposed decision to ban two neonicotinoid seed treatments — clothianidin and thiamethoxam.

“We were happy PMRA was still able to participate,” he says. “Timing-wise it was interesting, but it didn’t deter from the spirit that the event was organized under.”

Given the positive feedback and interaction, Carey says he expects they’ll look at holding another field day for PMRA employees next year.

Six Tips for Winterizing your Sprayer

Recirculating booms, PWM, and favourite nozzles — a Q & A with Tom Wolf