An aftermarket kit that turns a regular tractor into an autonomous machine made its Farm Progress Show debut in Boone, Iowa this week.

Smart Ag, based in Ames, Iowa, has developed a software platform and kit for controlling a tractor without a driver.

The first application for the platform, called AutoCart, automates a grain cart tractor for harvest.

After testing over the last two years, a limited number (15-20) of systems will be installed throughout the Midwest and up into Manitoba for harvest this fall, says Colin Hurd, founder and CEO of Smart Ag.

The initial function is grain carting, but they intend to add other applications to the platform, says Hurd, in the interview below. 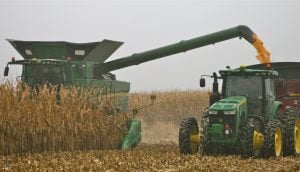 “Tillage is probably the next thing on our radar based on a lot of feedback from customers. If they can use that same tractor twice a year, it doubles their return on investment and takes care of two difficult-to-hire-for tasks,” he notes.

The aftermarket concept that Smart Ag is bringing to the market is similar to the work of Matt Reimer, a farmer from Killarney, Manitoba who built his own driverless grain cart tractor kit. (We’ve featured Reimer’s driverless technology here and here.)

“Matt’s work had a big influence on my initial step to move forward,” says Hurd.

Colin Hurd joined us inside the media tent during the thunderstorm at the Farm Progress Show to discuss Smart Ag’s plans for introducing its driverless tractor technology, how it works, liability questions, and the future of tractor automation:

What if it was Wynne? Governments of the “correct” political stripe can make bad policy

OPINION Travel with me to a time not long ago when the government in Ontario was of the red variety. The former premier, at one point, went so far as to also serve as agriculture minister, in an effort, one can only imagine, to show her commitment and respect for the portfolio. Kathleen Wynne's government…