Grain prices had a mostly red week but corn, soybeans, and canola were all about to recover their losses on Friday to end the week near equal — if not slightly above where they ended the previous Friday.

Chicago SRW wheat contracts lost about 32 cents USD/bushel to close down 5.5 per cent – six per cent for the week. Down in Kansas City, HRW wheat prices dropped nearly 40 cents (or six per cent – seven per cent, depending on the contract). The main reason for the decline is attributed to the rains falling across major winter wheat-growing regions in the U.S. Also, the bullish dynamic in Europe, the Black Sea, and Australia has seemingly been priced in, relative to a decent-sized crop coming off in Canada.

On that note, on Thursday, StatsCan said total wheat stocks for the period ending July 31 came in at 6.2 million metric tonnes (MMT). That was a 10 per cent decrease from the same time in 2017 and 11 per cent below the five-year average. 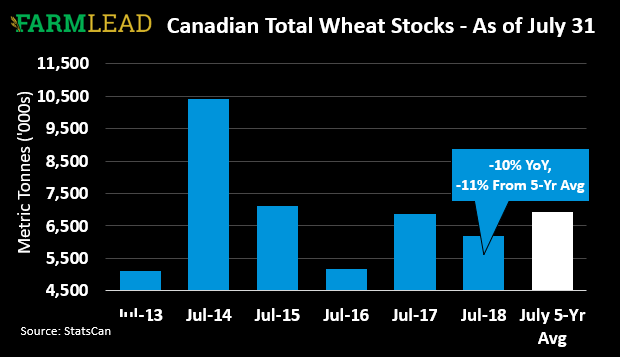 We saw on-farm stocks increase by 15 per cent year-over-year to 2.66 MMT (still 11 per cent below the 5-year average of 5 MMT). This increase in total wheat on-farm inventories offset the 23 per cent decline from last July in commercial stocks, which were estimated to be sitting at 3.5 MMT.

The most bullish numbers from StatsCan’s grain stocks reports was in barley, flax, and rye, down 41 per cent, 47 per cent, and 37 per cent respectively compared to July 2017.

Conversely, the most notable bearish year-over-year changes we saw were in total canola, lentils, and peas inventories, up 78 per cent, 178 per cent, and 117 per cent respectively. 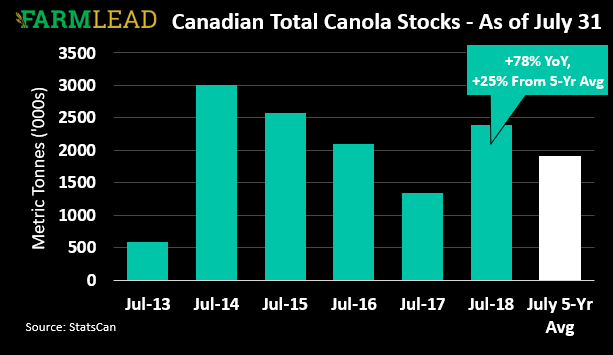 Canola markets ended the week sideways for the most part, with the November contract remaining under $500 CAD / metric ton on supply coming off the combines meeting demand needs.  This matched soybean futures in Chicago which were able to recover losses earlier in the week, closing up a cent or two, with November finishing at $8.45 USD / bushel and January 2019 a touch under $8.60.

Similarly, corn prices were able to recoup some losses from earlier in the week, with the December contract closing up 2.5 cents at $3.675. the December 2019 contract also gained two cents to close at $3.968 as it still flirts with $4.

Trade issues continue to dominate the soybean and corn market, and with prices where they’re at, it’s widely expected that U.S. 2019 soybean acres will fall. This was confirmed recently by a FarmFutures survey which suggested American farmers will trim acres by about two million — from 89.6 million to 87.5 million acres. That would be a 2.3 per cent decline from last year.

The shift favors corn acres and winter wheat acres. The survey projected an increase in U.S. corn acreage by 1.7 million acres to 90.8 million. That would be about a two per cent jump from this spring’s planting.

Contrast this against Brazil, where soybean acres are projected to rise anywhere from two to five per cent. Further, next door in Argentina, export taxes are being increased on everything but soybeans (which are already taxed), which means that corn acres are likely to go down for their 2018/19 crop.

Meanwhile, FarmFutures pegged winter wheat acres at 33.6 million. That would be a 2.6 per cent jump or 850,000 more acres than this year. Winter wheat is expected to increase by about four per cent, while white wheat intentions dipped.

Finally, spring wheat and durum wheat are expected to decline by 2.5 per cent to 12.9 and 1.8 million acres respectively.

While it’s easy to only think about getting Harvest 2018 done, there’s something to be said for thinking about your Plant 2019 when you have a few hours to yourself in the cab of the combine (or tractor if you’re the person charged with carting all day long!).

Price Floors and Early Planting — This Week in the Grain Markets

The expected pull-back begins — This week in the grain markets

One thought on “U.S. rains, Canadian harvest pressures wheat markets — This week in the grain markets”