The Trudeau government announced its plan for a federal carbon tax policy on Tuesday. It’s a move many saw coming, but some are already criticizing for the lack of transparency from the start.

To break it down, as part of the federal plan, those provinces who don’t have a plan up to the Liberal’s standards — Ontario, New Brunswick, Manitoba, and Saskatchewan — will incur a fuel charge (shown below) that will roll out as of April 2019. The charge continues to rise up to $50 per tonne by 2022. 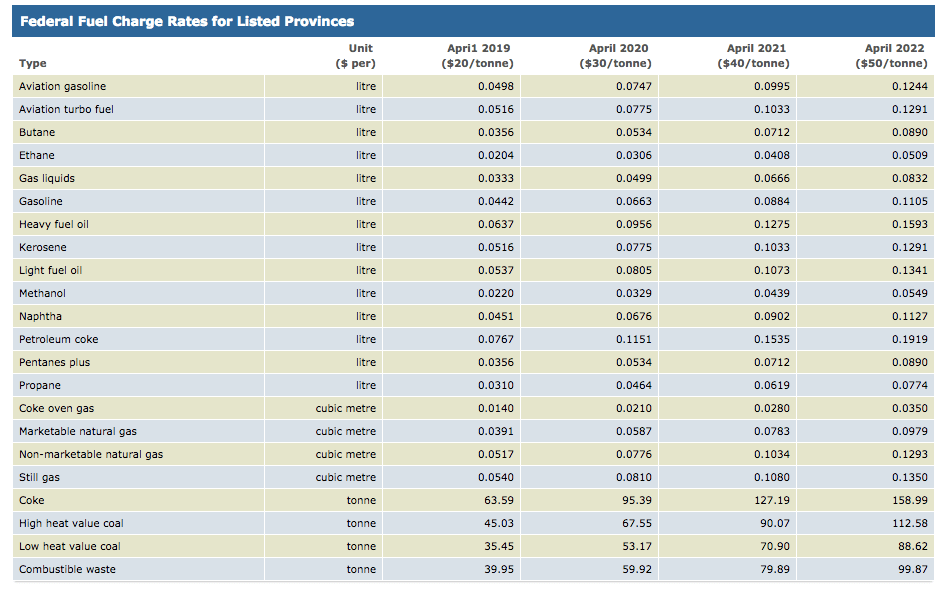 For agriculture, there are some possibilities for reduced “pollution tax.” The Greenhouse Gas Pollution Pricing Act (GGPPA) states there will be relief for farms, “when certain conditions are met.”

According to a government backgrounder, the GGPPA “provides that a registered distributor can generally deliver, without the fuel charge applying, gasoline or light fuel oil (e.g., diesel) to a farmer at a farm, if the fuel is for use exclusively in the operation of eligible farming machinery and all or substantially all of the fuel is for use in the course of eligible farming activities. Farmers do not need to be registered for the purposes of this relief.”

As the prime minister stated in a news conference today, people in the four provinces without a carbon plan will be, “sent a climate action incentive.” This will come from 90 per cent of total funds recovered from the National Climate Plan (NCP).

This is being dubbed as “cash back” that a person will see on their 2018 tax return as a dollar amount. The government says this incentive payment is more than what they’ve had to pay in regards to the NCP. (see the breakdown below) 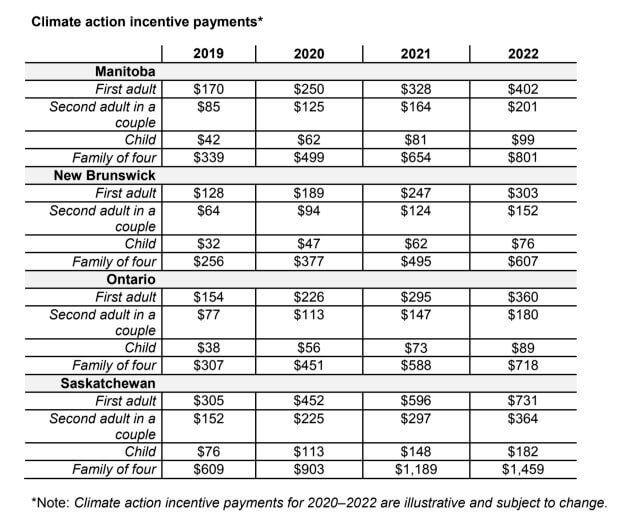 The other 10 per cent collected under the NCP will go towards cities, schools, hospitals, businesses, and Indigenous communities, the government says. As an example, this funding would be used towards energy efficiency projects.

However, if you live in a rural area or small town you could also see an additional 10 per cent of the baseline incentive added to your tax return. According the government, this added incentive is in recognition of the increased energy needs and reduced access to alternative transportation options, such as a bus or ride sharing service.

As far at the other provinces and territories involved — Alberta, British Columbia, Newfoundland and Labrador, Northwest Territories, Nova Scotia, Nunavut, Prince Edward Island, Quebec and Yukon — Trudeau praised them for developing their own system or for choosing to adopt the NCP.

The money acquired by those provinces and territories will be used at the discretion of each province and territory through their climate action plan.

Carbon tax on grain drying fuel not “significant” enough to qualify for an exemption, Bibeau says