Grain prices this week dipped lower as the complex dealt with some U.S. export numbers that came in below expectations and harvest 2018 picking back up.

However, things might slow again soon as it looks there are a few spots that might get rain over the weekend or into next week, which would intuitively slow things down again. Thinking more long-term, the National Oceanic and Atmospheric Administration (NOAA) has now raised their expectations for an El Niño this winter to 70%. This usually means a wetter winter for the southern U.S. but above-average temperatures and below-average precipitation for northern areas in the country.

While the 2018/19 North American harvest is coming off, the 2017/18 Brazilian soybean crop is still being shipped out. Nearly 4 MMT of soybeans have been exported by Brazil so far in October. Last week, port facilities loaded an average of four boats a day and that pace is expected to continue over the next few weeks. All data points suggest these vessels are headed to China where 4 MMT would represent about two week’s worth of soybean crush capacity.

Unless you’ve been living under a rock, China is looking at all alternative protein options instead of sourcing from the U.S., especially with the 2018/19 Brazilian soybean harvest starting in mid-January. Historically by now, more than three-quarters of U.S. shipments in October are to China. This year though, all export inspections to date are down about 40% year-over-year. Through Week 7 of the 2018/19 U.S. soybean crop year, the USDA reports that actual exports are down more than 35% with just 6.17 MMT shipped out from American ports. 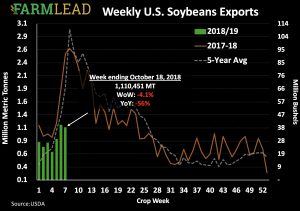 With more than 3 months left to go in the Brazilian 2017/18 crop marketing year, it’s been estimated that Brazil might end up shipping out more than 80 MMT of soybeans. While farmers have limited stocks left to sell, crush margins have been negative since mid-September so why wouldn’t they try to sell their own supply at a profit to China?

As reported by AgriCensus, CNGOIC said at a feedstuff conference in China last week that “in theory, China will not need soybeans before February 2019.” Further, COFCO ‘s Global Head of Oilseeds speculates that “there are enough physical beans in Argentina to get China through” the first quarter of the 2019 calendar year. While Brazil is basically out of beans, Canada has also emerged as an alternative buying option.

If we’re being honest with ourselves though, we’ve heard enough rumours of U.S. soybeans making their way to China – be it in soymeal or unprocessed form – via the likes of Canada, Argentina, and a few other countries. We also know that more Black Sea rapemeal and sunseed meal and Canadian canola meal is on the menu for Chinese pigs.

Last week we got the updated balance sheet report from Agriculture Canada. In it, AAFC used Statistic Canada’s September satellite-based production estimates to provide the supply side. On the demand side, the most notable changes were seen in 2018/19 canola and non-durum wheat exports, which were raised to 11.5 MMT and 18 MMT, respectively. This would be a new record for canola and the third-largest number ever for non-durum wheat.

The former seems less possibly unlikely as, through Week 12 of the 2018/19 crop year, canola exports are tracking about 10% below last year’s pace with nearly 2 MMT shipped out. Canola prices are recognizing that with the market trending lower this week as harvest accelerated. 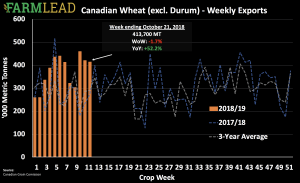 There’s been some buzz that some Asian flour mills are trying to lock up supplies at these low prices through the middle of 2019.  This would challenge their historical practice of being more hand-to-mouth buyers. Their rationale is that, with some depressed production and export activity out of Russia and Australia, buying wheat from Canada and the U.S. – the only two reliable sources remaining – would come at a cost. Very explicitly, one trader said there’s an expectation of a supply squeeze after March.

We already know that Australia’s wheat exports to Asian markets – the largest demand centre for wheat in the world – are down significantly year-over-year through the first 6 months of the calendar year. 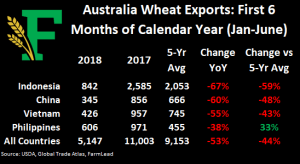 Conversely, non-durum wheat shipped out off Canadian shores are up more than 30% year-over-year at 4.45 MMT through Week 12 of the 2018/19 crop year in the Great White North.

We know that Asian wheat buyers who have operations in Canada are concerned about Canada’s wheat quality this year though, much like many other millers. Given some of the challenges of Harvest 2018, we continue to advocate for getting your grain tested, especially cereals like wheat. Order your grain tests at GrainTests.com here from any of the independent labs across North America and be proactive in your grain marketing by knowing what’s in your bin.

Prices haven’t necessarily reflected these non-durum wheat export activities yet, but we are seeing some strong values in oats, peas, flax, and feed barley. On the FarmLead Marketplace, oat prices delivered in Manitoba range between $3.75 to $4.00 per bushel. In Saskatchewan, we’re seeing $3.40 per bushel delivered and in Alberta, $3.00 per bushel picked up on farm.

For peas, we’ve been seeing yellow pea prices of $7 and green pea prices of $9 per bushel return to bid sheets in Alberta and some parts of Southwest Saskatchewan. For flax, $13.00 per bushel delivered (and sometimes FOB farm) is also regularly being contracted on the FarmLead Marketplace by farmers in Saskatchewan and Alberta.

For feed barley, we’ve seen values dip a bit lower as freshly harvested crops are starting to move into the market. Worth noting is that corn prices coming up from the U.S. are very competitive with Lethbridge-delivered cereals. That being said, feed barley prices are still, on average, 25% higher than where a year ago and the best they’ve been in a very long time (and for most, the best ever).

Cognizant of the fact that feed grain prices usually run in three-year cycles, we feel that there are more downside risks at this point for feed barley prices than there is upside potential. These should all be factors to keep in mind as you finish up your harvest and think about cashflow needs before the end of the calendar year.

A Tale of Two Markets — Do Corn Prices Have More Upside Potential Than Soybeans?

Soaring With Soybeans — This Week in the Grain Markets

Grain Market Moves this Week: It’s Not All Politics