Going into the report, the market was a bit bearish, expecting 2018/19 corn, soybean, and wheat carryout in both the U.S. and around the world to increase. However, the market has also been thinking about the wet and/or snowy weather slowing harvest 2018 across North America.

In the October WASDE though, global ending stocks did increase from the September estimate, but the market responded positively to smaller corn yields in the U.S.. Specifically, the USDA lowered average U.S. corn yields to 180.7 bushels per acre, which is still a new record, but down 0.6 bpa from the September estimate. For U.S. soybeans, average yields were raised by 0.3 to 53.1 bpa. 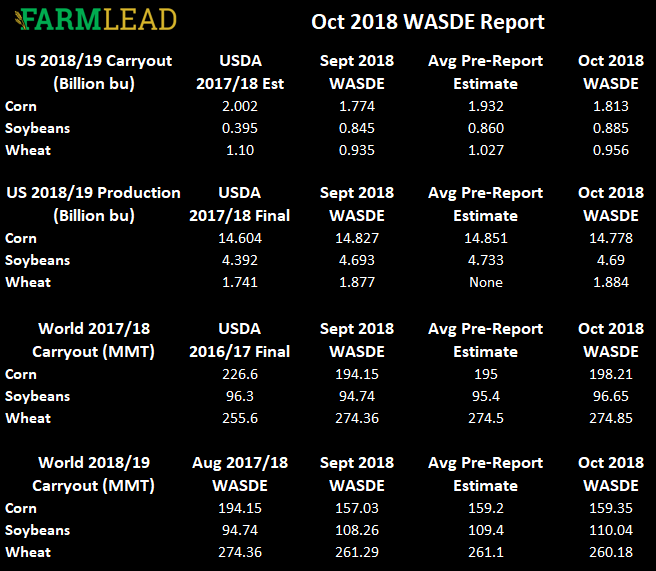 The soybean number was quite large yet soybean prices weathered storm fairly well as rains across the Midwest were sure to slow harvest progress, as well as potentially challenge some quality.

On the demand side of the equation, CNGOIC came out with their updated estimate of 2018/19 Chinese soybean crush numbers. It was not bullish.

The state think tank says that China will crush 89.5 million metric tonnes (MMT) of soybeans in their 2018/19 crop year (which technically starts October 1). CNGOIC’s September estimate was 96.1 MMT, while 2017/18’s total volume was 94.3 MMT. The Chinese Ag Ministry was supposed to put out their own estimates today for soybean demand in the People’s Republic but they cancelled the release, citing technical issues as the reason why!

This comes on the heels of China’s Feed Industry Association proposing earlier this week to cut the minimum protein threshold for pig and poultry feed by 3 points, from 20% to 17%.

The corn market received a bit of a bullish winds between a wet week slowing harvest progress and U.S. President Trump formally announced that he signed a memo, telling the EPA to lift summer fueling restrictions on E15 use (gasoline containing as much as 15% ethanol). This is more politics than anything though as the White House tries to court Iowan voters ahead of the midterm elections.

Moving onto wheat, the market traded rather sideways this week, with Chicago SRW wheat and Minneapolis HRS wheat prices a few cents lower than where they finished last week at $5.173  and $5.913 USD / bushel respectively. Conversely, Kansas City HRW wheat prices were unchanged on the front-month contract, but gained a few cents for other 2019 contracts.

As relates to the October WASDE, Canadian total wheat production was left unchanged by the USDA at 31.5 million metric tonnes (MMT), which is about 500,000 MT more than StatsCan’s satellite-based estimate back in September.

As a reminder, in that report, StatsCan suggested 22.91 MMT of spring wheat, thanks to spring wheat yields being raised by 3.1 bushels per acre from the August estimate to 46.6! That being said, there’s still about 32%, or about roughly 7.25 MMT, of spring wheat left to combine in Western Canada. But the question that we’re asking is not about quantity per se, but more about comparing this year’s challenges to 2016.

That year, in 2016, we saw a lot rains that significantly downgraded spring wheat quality. This year, it remains to be seen what sort of true impact the snow will have on spring wheat quality. In 2016, the Canadian Grain Commission estimated that the following breakdown of grades by region, alongside total average protein: 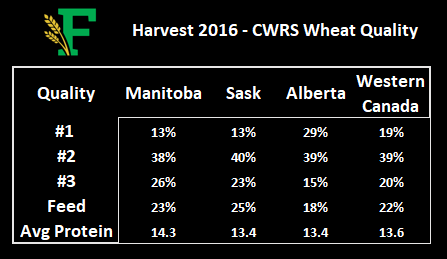 Looking globally, major wheat production changes were seen in Russia (-1  to 71 MMT) and Australia (-1.5 MMT to 20 MMT). Regardless, global wheat ending stocks for 2018/19 are still set to be the second-largest ever at 260.2 MMT, pulling back a bit from last year’s record. 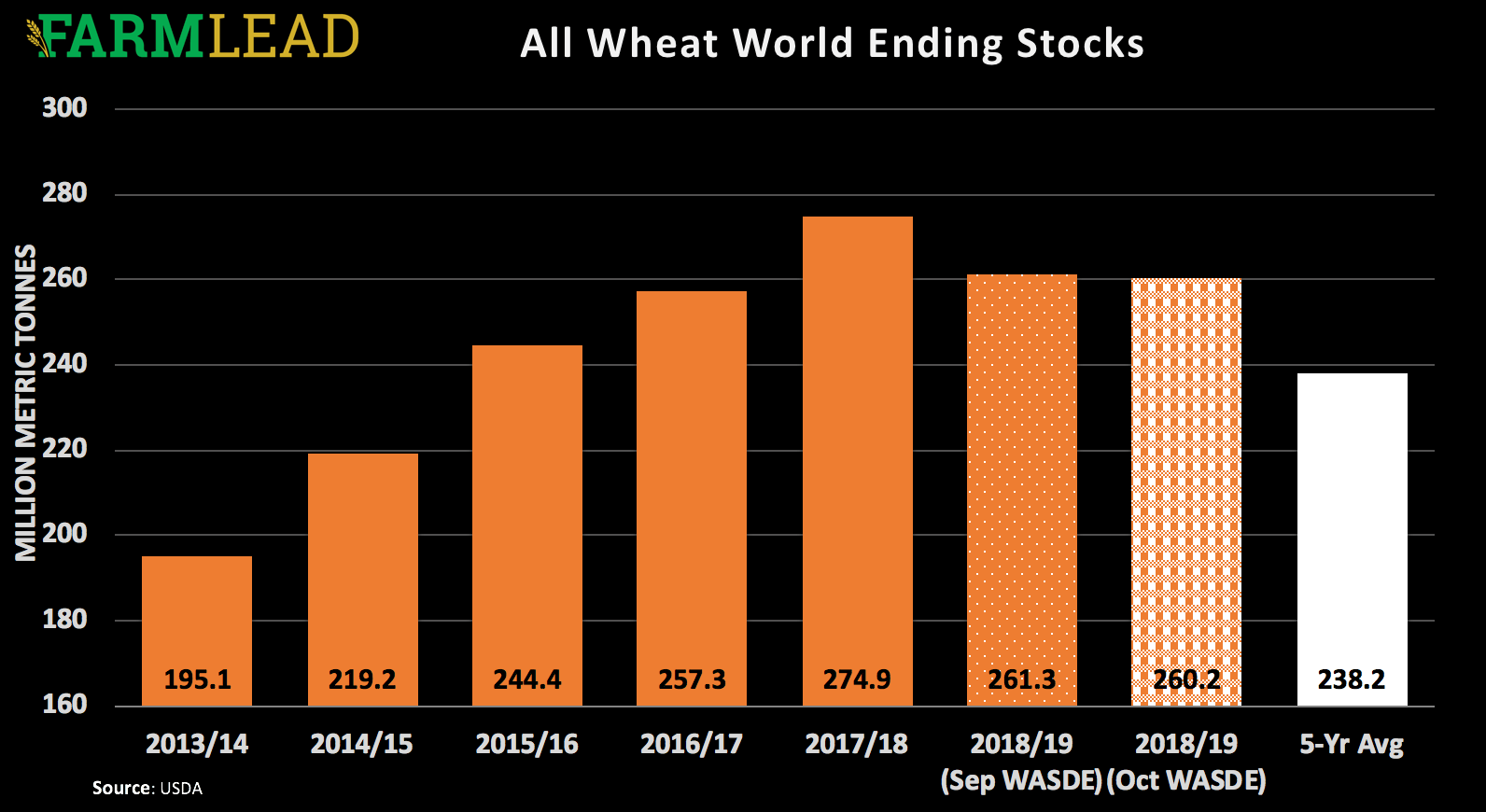 With these numbers in mind, it’s worthwhile to reflect on where your wheat price expectations were in the fall of 2016, when we had also had a big carryout and a late harvest in Western Canada.

Canola prices on the January 2019 contract dropped by nearly $5 but were able to stay above $500, closing at $501.70 CAD / metric tonne. While going into the weekend, provincial crop report say that there is still 8.9 MMT or 42% of the Canadian canola crop left to harvest, grain markets are also thinking about what’s going on across the border in the U.S.

While we know that the American soybean crop will be a record, the USDA said this week that American farmers will produce a record canola crop of 1.65 MMT in 2018/19. This is a jump of 16% year-over-year, namely because average yields jumped nearly 20% from the 2017 harvest to 37.3 bushels per acre.

Ultimately, there is plenty of supplies to go around, but the market is starting to acknowledge some of the wetter weather and the potential impact on quality. Further to that, we do start to see a general trend around this time of year for grain prices to pick up off the harvest lows.