Grain markets this week mostly ended lower as the complex dealt with the pace of Harvest 2018 picking back up. The losses were mitigated by a mostly positive day of trading though on Friday, which helped canola and oats end the week in the green.

On that note, I’ve been getting a lot of questions about where canola prices are going. There are some out there who think that the rally of canola prices seen earlier in October was an opportunity missed, mainly because of the large U.S. soybean carryout and there’s still a lot of canola left to harvest.

It can be suggested that the market has priced in the size of both crops already, as it usually does by this time. However, also worth noting is the historical tendency of canola prices to rally in November. 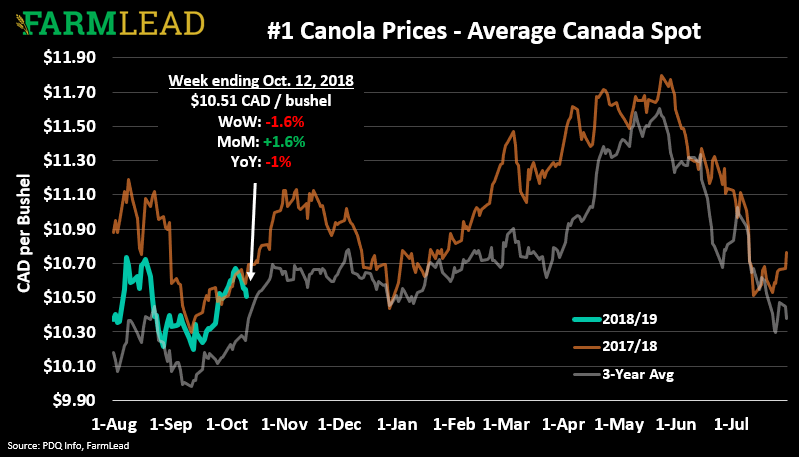 It could also be suggested canola prices have been subdued thanks the weaker performance of Canadian exports; through Week 11 of the 2018/19 crop year, they tracking nearly 16 per cent behind last year’s pace with just 1.73 million metric tonnes (MMT) shipped out. 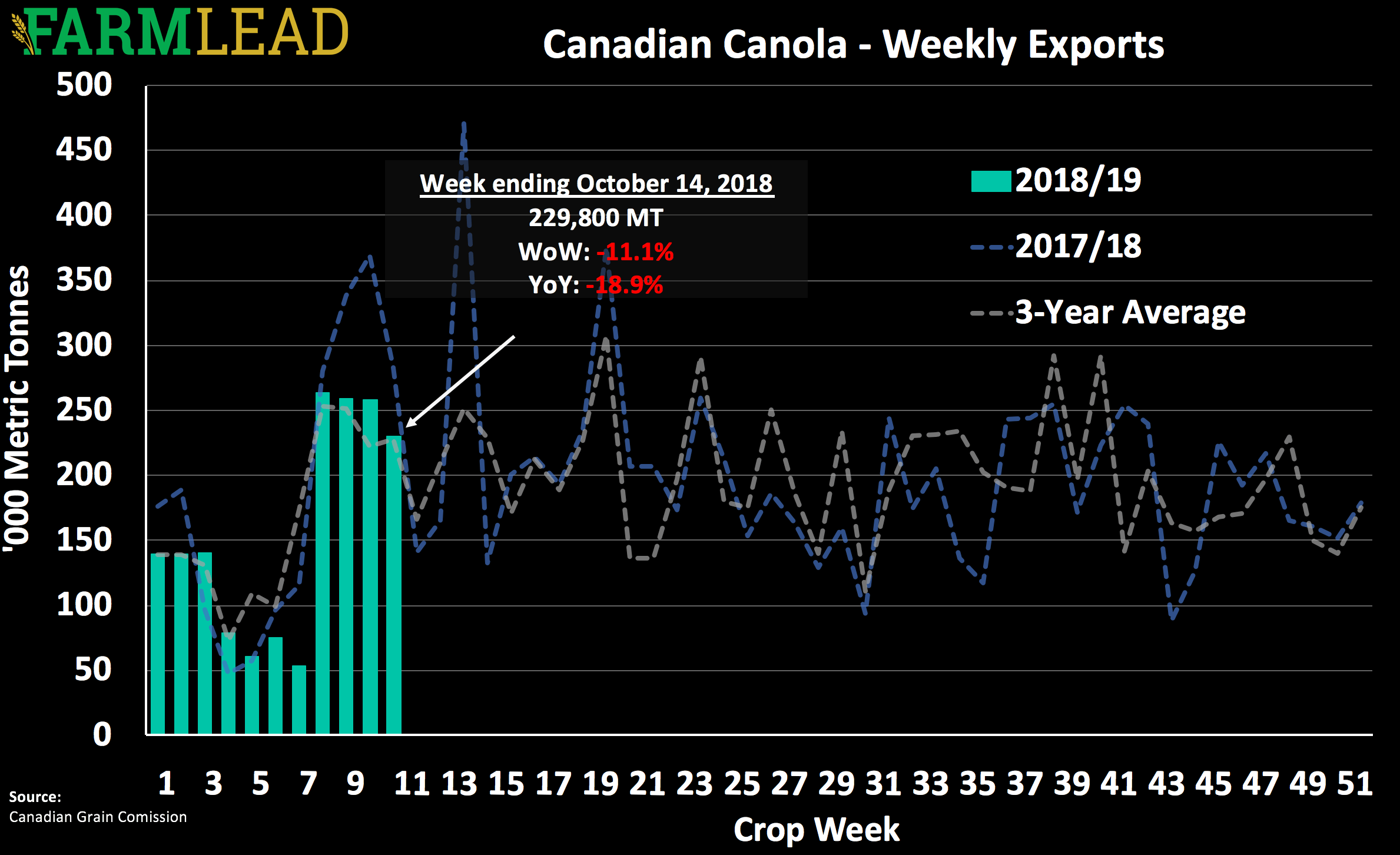 This week, the January 2019 canola contract finished at $502.50. Similarly, the new crop November 2019 contract close at $501. Worth mentioning is that through this past week’s provincial crop reports, there is still 41% or 8.5 MMT of the Canadian canola harvest left to combine. With some diverging thoughts about supply at least, please participate in, comment on, and/or share our Twitter poll here as to where you think canola prices could top out before Christmas.

Conversely, a few cargoes of U.S. soybeans were headed to China this week as landed prices are now comparable with that of Brazil. Worth noting is the International Grains Council is expecting China’s full 2017/18 crop year soybean imports to come in at 93.5 MMT. This would be down three per cent year-over-year and slightly below the current official forecast of 94 MMT. While the IGC notes that U.S. soybean shipments to China has dropped considerably, larger soybean exporting campaigns from Brazil, Uruguay, and even Russia have offset the fall.

Soybean crush margins have been positive since August and available stocks at the port are sitting around 8.57 MMT, down slightly from last week’s record of 9 MMT.

With all this in mind, soybean prices lost more than a dime this week, with the January 2019 contract closing on Friday at $8.705 and the November 2019 new crop price finishing at $9.18 USD / bushel.

Similarly, with the U.S. corn harvest picking back up this week, corn prices in Chicago fell more than a nickel, but the good news is that new crop December 2019 contract. Worth noting is that U.S. corn exports are now tracking about 80 per cent year-over-year with nearly 7.3 MMT shipped out in the 2018/19 crop year. 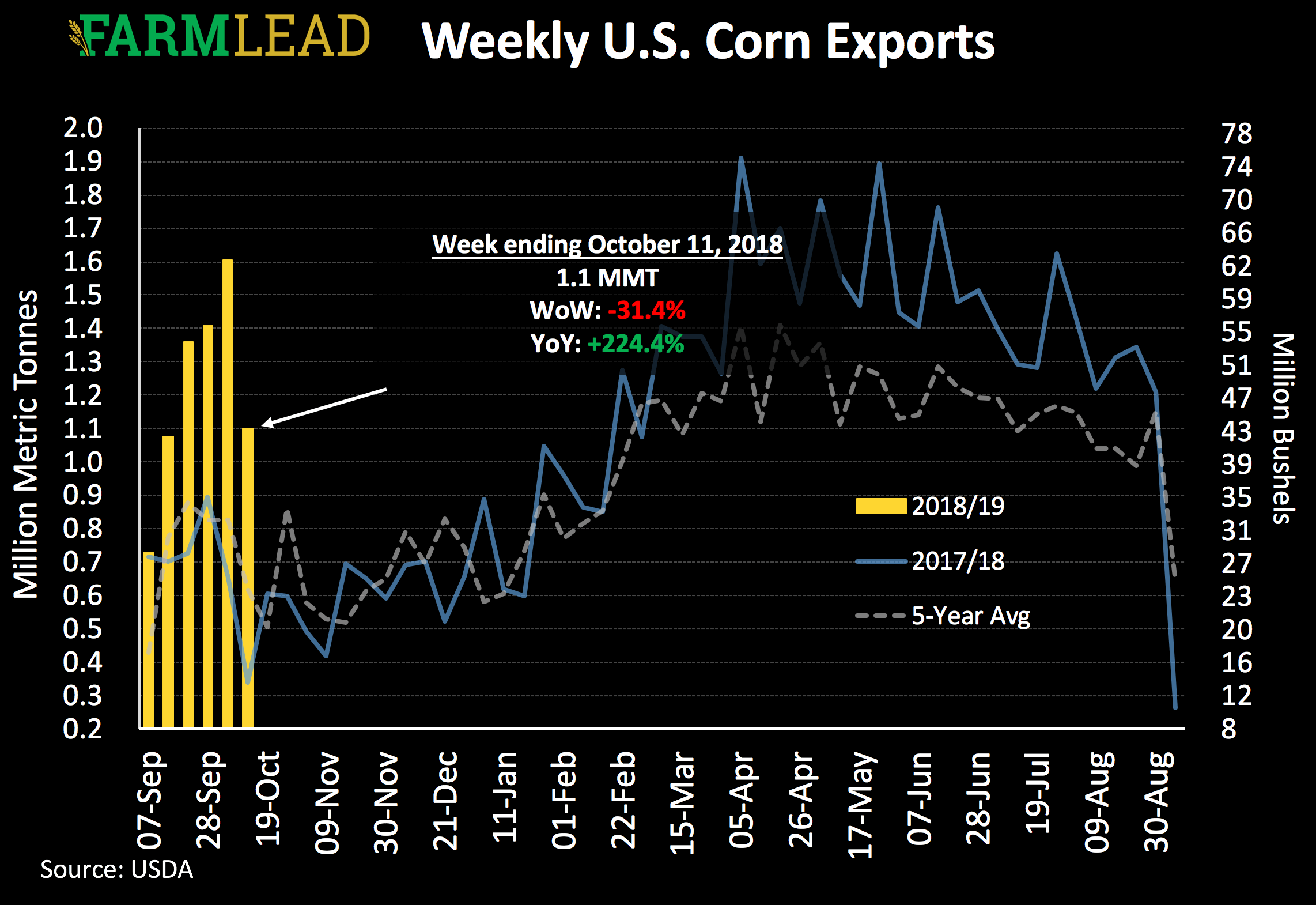 On the wheat side of things, provincial crop reports through Friday put 27 per cent of the crop still in the field, or about 6.3 MMT. That helped Minneapolis spring wheat prices rally on Friday, but that still left them slightly lower for the week by 3 – 7 cents with the December contract closing just under $5.90 USD / bushel. Comparably, the December 2019 new crop contract finished the week just over $6.26.

For winter wheat, planting progress was slowed by the aforementioned rains and snow but that also put a damper on winter wheat prices as markets accounted for the beneficial soil moisture. Accordingly, December Kansas City HRW wheat prices dropped about 8 cents to finish at $5.163 USD / bushel, while Chicago SRW wheat prices for the same contract moth lost 3 cents for a close of $5.148.

Overall, one could argue that we’re at a bit of a crossroads in grain markets thanks to the delayed Harvest 2018. More crop is coming off as we speak, but, technically, the harvest lows are supposed to be behind us right now. Of course, the fresh supply coming off the field is likely a bit wet and it needs to be dried, but does that potentially upset the usual uptick in trade flows, namely exports for this time of year?

There are positions to both sides of the debate, but if I have to pick a side, I’m voting for harvest lows being behind us.