Wheat midge is still a significant threat to wheat in Western Canada. While the threat has subsided a bit because of the discovery and use of the SM1 resistance gene, it’s important to remember that there is only one bullet in the chamber, and if it gets spent wheat crops will be, once again, at risk from this pest.

In this episode of the Wheat School we talk to Tyler Wist, research scientist with Agriculture and Agri-Food  Canada (AAFC), about the new wheat midge colony in Saskatoon to be used for research. In wheat fields midge are sometimes so thick they are like a red mist, but when you need some for research they are often almost impossible to get a hold of. That makes this colony, and the one in Winnipeg, very important resources for researchers.

We also talk about the one gene that is providing all the defence against this insect and the possibility of finding another gene, or trait to provide some resiliency.

The SM1 gene, the only resistance trait now available, works by causing the level of acid in the seed to go up. The wheat midge eat a little bit, find it unpalatable quit eating, and starve. This is very effective, but one gene is a very thin line of defence.

In order to buttress the SM1 gene, scientists are always on the lookout for other modes of action. One avenue of interest is simply a physical deterrent. Wheat midge are actually a very delicate insect and can be blocked from laying eggs by very small impediments. The problem is, there generally aren’t any impediments on a wheat head, but hair might help.

Wist says scientists are looking at just this type of diverse trait. Other traits that might be in the pipeline include lines with mechanical deterrents — like “hairy” varieties or those that decrease the likelihood of eggs hatching.

All of these potential breakthroughs have to be researched. This is why having a colony in Saskatoon would be very helpful. But wheat midge are not like fruit flies; they do not just show up out of nowhere. They have to be nurtured very carefully, with the right amount of moisture, at the right time and induced with lights that mimic dusk and dawn.

It is important to recognize that, even with potential new traits, there is only one proven technology, and that is the SM1. Wist says, “If you’re growing midge tolerant wheat with the SM1 gene, we have to really steward the gene so that we do not lose it. Projections say that we would lose the SM1 gene within about 10 years if we didn’t steward it properly and we can extend that to 90 to 100 years with proper stewardship.” 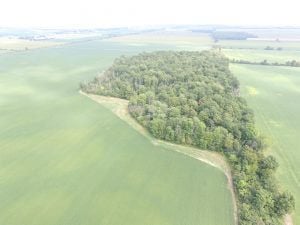 For years, Tim Williams has dutifully planted crops to the edge of the trees and bush that line the fields he farms near Petrolia, Ont. Every year, he looks at his yield maps to see the same red line indicating no crop yield in these areas that hug the bush and woodlots. But today there…Read more »