With the announcement of the carbon tax program implemented in provinces without a nationally accredited carbon tax policy, people in two of the three prairie provinces have flipped their vote to support the federal government’s plan.

According to a recent poll conducted by the Angus Reid Institute, the public’s perception in Alberta and Saskatchewan of the soon-to-be implemented carbon tax were leaning more towards the federal plan compared to a provincial plan. This change came after a similar poll done prior to the announcement there would be a “climate action incentive” paid to individuals on their tax return.

Meanwhile, the support for a national carbon tax has fallen slightly since the plan was originally announced. Three years ago, 56 per cent of Canadians supported the plan, but when polled this July, only 45 per cent of them were in favour. 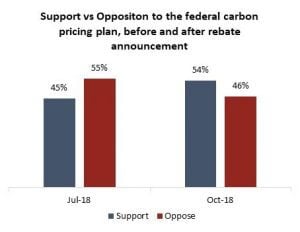 Now, the most recent poll found Canadians are once again divided, back at 54 per cent in support of  the Trudeau government’s plan.

To break it down further, the largest increases in support for the federal plan between July and October was found in Saskatchewan (+18%), Quebec (+13%) and Ontario (+11%).

Alberta is the only province where support did not increase over that period (-1%).

Another finding in the study shows that most in opposition to the carbon plan is the sense that it is a “tax grab”.

You can read the full results of the poll by clicking here.