Verticillium stripe, also known as verticillium wilt, is a relatively new-to-Canada canola disease. First identified on a research farm in Manitoba in 2014, the Canadian Food Inspection Agency (CFIA) conducted a nation-wide survey to determine the extensiveness of the pathogen in 2015, and found it to be in multiple locations.

In this episode of Canola School, Justine Cornelsen talks to RealAgriculture’s Dale Leftwich about this new disease; what it is, and what to watch out for. Cornelsen is the Canola Council of Canada’s (CCC) agronomy specialist based in Western Manitoba, and RealAgriculture caught up with her at the recent Canola Discovery Forum in Banff, Alta. (Story continues after video)

Prior to the CFIA survey, research was restricted because verticillium stripe was considered a regulated pest so special biohazard security protocols had to be followed whenever the pathogen was handled, whether in the lab or elsewhere. Scientists are are now able to ramp up their activities to understand the disease better.

As far as prevalence, Cornelsen says,”Within Manitoba, we are starting to find more and more fields infected with it, probably because of our really hot dry conditions we had this year.” 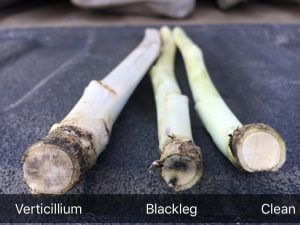 There are still a lot of unanswered questions with regards to this disease, Cornelsen says. “Because it is a new disease we don’t know how it works here in Canada yet – what kind of yield impact it’ll have to canola production,” she says. We do know that it does have an impact on yields when present in fields in Europe, she says.

Cornelsen says initially it may be a little tricky to identify. “Because it is a new disease we are still trying to figure out what it looks like in the field,” she says. Verticillium typically comes in late in the season— it’s really easy to find a month or two after harvest. “When you go back into the field you’ll see the greying stems, you’ll see the micro sclerotia, ” she says. At swath timing, when you do your typical disease survey, it’s not so clearly defined compared to other diseases, and can be confused with blackleg.

Canola School: Straight cutting for the first time? Here’s what you need to know

Canola School: A insect pest forecast for the Prairies