The Canadian Centre for Food Integrity rolls out its latest public trust data this week in conjunction with its third annual Public Trust Summit, being held at Gatineau, Quebec.

The centre conducted two surveys this past year. One was a continuation of its public trust barometer, and the other a Canada-U.S. study which focused on three main areas: shifting trends in public trust and consumer concerns, food waste, and finding credible information about food.

Consumers rank access to healthy and affordable food high on their list of concerns. The rising cost of food was listed as the top concern of those surveyed, and this concern has increased each year of the study since 2016.

Crystal MacKay, president of CCFI, says that given the centre’s rankings on several issues, including the environment and economy, food and food-related issues should be higher on most political agendas. What’s more, while agriculture as an industry likes to remind consumers that it’s “feeding the world,” food access for people in other countries ranked very low for Canadians’ concerns.

The study suggests there is increased uncertainty in the direction of our food system as well. For the first time since the survey was done, the results show a decreasing overall impression of Canada’s agriculture system. MacKay says that the centre will look for more qualitative data on this point in its 2019 survey.

There are also rising concerns surrounding animal welfare as a whole. When it comes to consumers’ confidence that Canadian meat, milk, and eggs are raised humanely, the bulk of respondents were unsure. 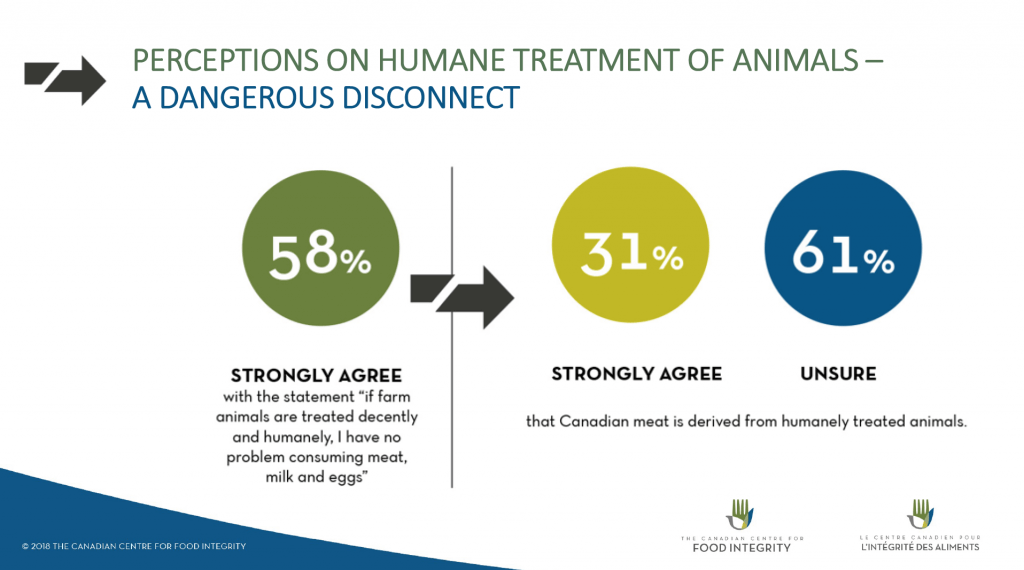 Also of interest, when asked about food safety, consumers noted that those people they feel are responsible for food safety are not seen as trustworthy (processors and government).

For the first time, CCFI looked at opinions and perceptions on food waste. CCFI considers this is a baseline study because of the surprising lack of data on Canadian trends and patterns.

Consumers identified throwing out leftovers, ‘best before’ dates, and buying too much food as the main culprits in the food waste dilemma, and identified themselves as responsible for the majority of food loss.

Also for the first time, CCFI surveyed online behaviour and how consumers deem food information credible. While this is a baseline study, and a complex one, the results from the first year contain some interesting insights into online behaviour.

The study set out to identify people’s shared values and their opinions on things like food affordability and also determine who people look to for advice and information they can trust. For the survey consumers were organized into five categories of social influencers: challengers, investigators, institutionalist, follower, and, competitor. Each category is viewed as more or less credible, depending on the individual’s perspective and role.

Attendees at this week’s Public Trust Summit will learn much more about this aspect of the study, but you can read more on the 2018 research findings, here.

Canola carryout a “wet blanket” over a grinding, sideways market