Climbing on bins is one of the things that you just have to do if you are a farmer. If you do not have to do it yourself, someone who works for you has to do it. Grain bins have evolved over the years, but the same could not be said for fall protection (safety harnesses). That is, until now.

Fall protection is an old concept in the construction and mining industries, but in agriculture, it just hasn’t been a focus. But Northern Strands has changed that and has managed a first-place award for new innovations at Red Deer’s Agri-Trade with its Bin Safe System.

Real Agriculture’s Dale Leftwich caught up with Jesse Kope, marketing manager for Northern Strands, to talk about how a company with deep roots in mining and construction managed to win an award for an agricultural innovation. As Kope explains, it all started with a request from a farmer. (Story continues after video.)

Kope explains, “We had a farmer approach us about two years ago, and they came to us because they were looking for fall protection on their grain bin. To our surprise we didn’t find anything on the market. So we wanted to help him out, and we realized how important it was to be able to climb your grain bin and feel safe and not slip and fall off.”

Kope says no one had really designed fall protection specific ffor the agriculture industry. Farmers, their employees, and industry reps that had to inspect or probe bins had no good options for scaling bins safely. As Kope says, “Moreso than anything they just weren’t using anything at all, or if they were using a lanyard they were clipping into ladder rungs which were not actually rated for somebody to take a fall.”

The system engineered by Northern strands can be retrofitted onto most grain bins. It works with a cable so that you do not have to attach yourself to a rung. It has a one-way break so you don’t have to clip and unclip on your way up and down. It is hoped that the ease of use will make it more likely to be widely adopted and used. 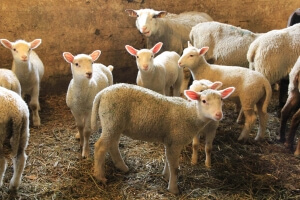 MacDon noses in to the corn header business