Grain markets ended this past week all lower as the complex took note of some larger inventories in this week’s November WASDE report, and not the smaller U.S. yields.

Updates from China’s National Bureau of Statistics (NBS) were incorporated into this month’s WASDE report. Basically, if not for China, this might be considered a bit of a bullish report! On the other hand, anything related to China’s grain production and inventories can sometimes be viewed as questionable. 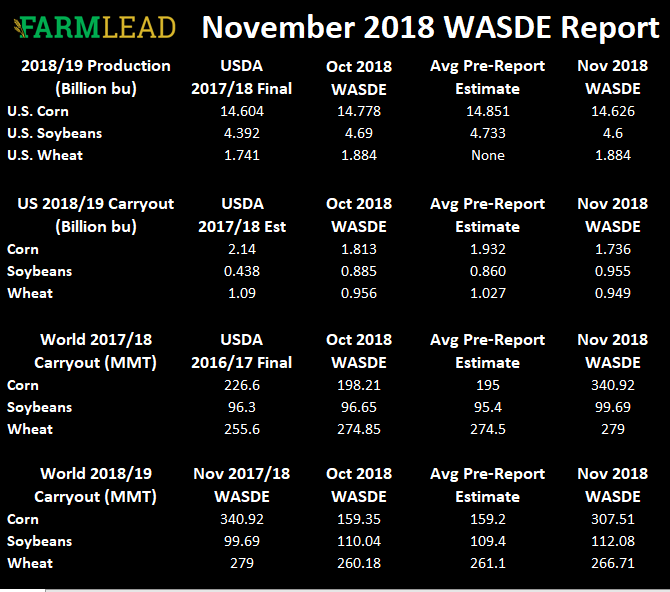 While it’s not usually a hot topic, canola production was lowered in Australia by the USDA, which helped drop ending stocks by 30,000 MT to sit about nine per cent lower year-over-year. From a price standpoint though, canola markets dropped a few dollars with the rest of the market with the January 2019 closing at $482.40 CAD / MT. Conversely, the new crop November 2019 contract actually gained $1.60 on the week to finish at $494.80. 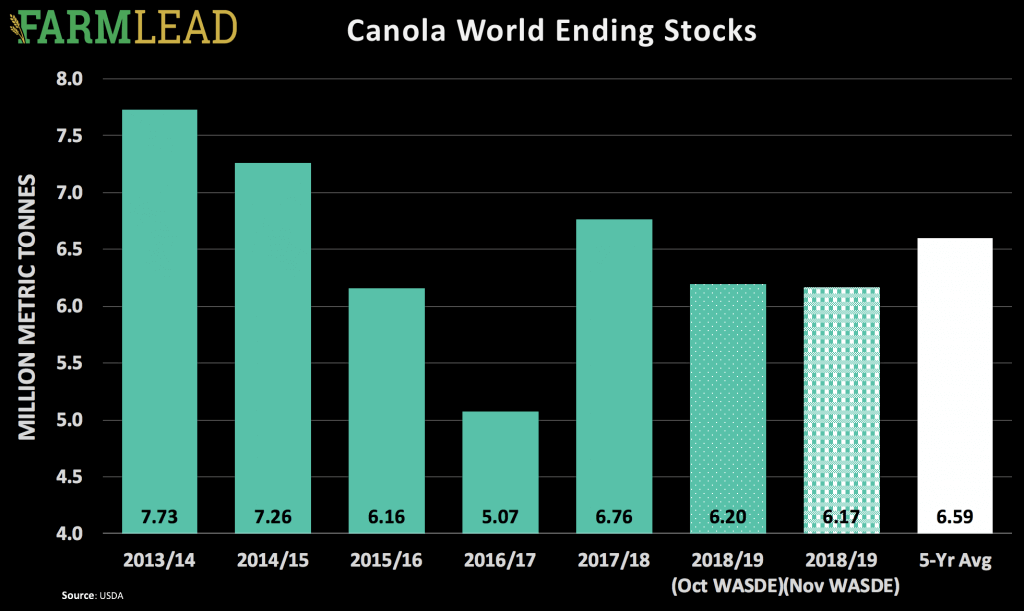 Switching over to soybeans, the oilseed lost more than a dime in Chicago with January 2019 contract closing a hair above $8.75 USD / bushel. Like canola though, new crop November 2019 prices gained 3.5 cents to finish the week at $9.365.

On the exports front, U.S. shipments were lowered by 160 million bushels to 1.9 billion, down about 11 per cent year-over-year. However, Through Week 9 of the 2018/19 U.S. soybean marketing year, exports are tracking more than 41 per cent lower year-over-year to just 8.62 MMT. Shipments to China are literally down 96 per cent with just 15 million bushels shipped there so far, versus the nearly 380 million bushels at this time a year ago.

Conversely, U.S. corn exports program has been strong though! Through Week 9 of the 2018/19 crop year, actual exports of U.S. corn are tracking 85 per cent higher than the same time in 2017/18 with over 417 million bushels now shipped out. 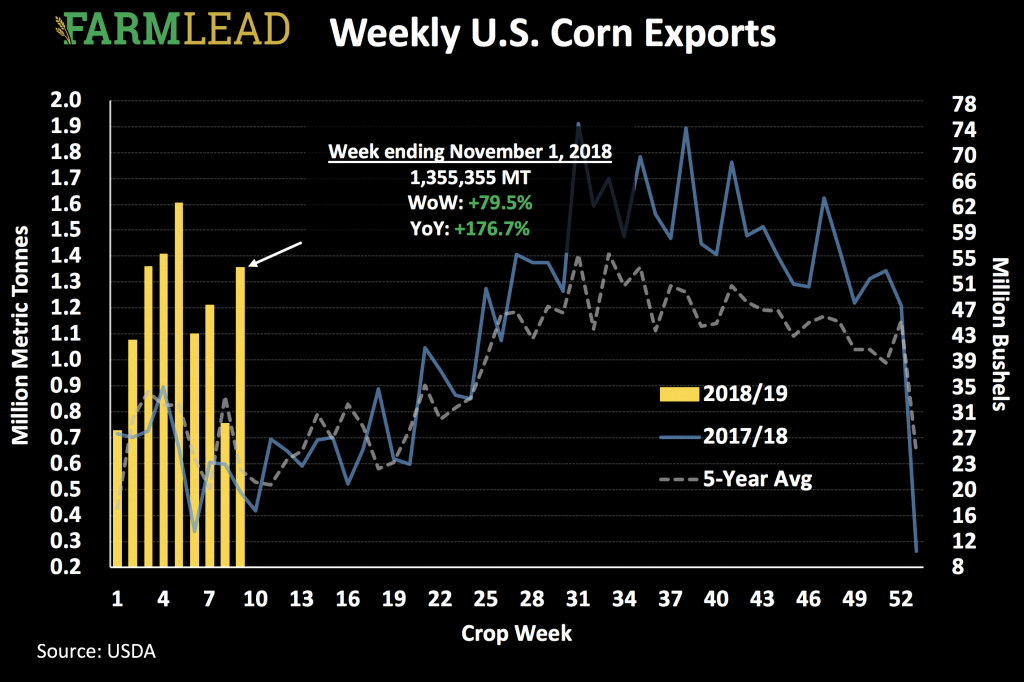 However, the USDA surprised the market by lowering 2018/19 U.S. corn exports by 25 million bushels month-over-month to 2.45 billion bushels.

Thinking more globally, China’s NBS re-evaluated all things agriculture over the period 2007/08 to 2017/18. Throughout this decade-long timeframe, China increased total corn production by a ridiculous 266 MMT (or 26.6 MMT more corn output per year). As a result, 149 MMT, all attributed to China, was added to the 2018/19 global ending stocks number corn.

As mentioned above, since China isn’t necessarily a large importer OR exporter of corn, this increase is considered to be a mute point and won’t have much of an impact of corn prices.

For wheat, if we don’t count China, the total 2018/19 global harvest was lowered by 1.9 MMT in the November WASDE report. The majority of the revision was attributed to Australia’s wheat crop being lowered by 1 MMT down to 17.5 MMT. As a reminder, last week, Australian Bureau of Agricultural and Resource Economics (ABARES) said that this year’s wheat crop in the “Land Down Undaa” would be just 16.53 MMT.

This is still quite a small crop and that means less exports. Specifically, in this WASDE report, the USDA lowered Australian wheat exports by 1.5 MMT from last month to 11.5 MMT. This would be lowest since the 2007/08 crop year.

The USDA kept Canadian wheat exports at 24 MMT, despite the fact that currently, non-durum wheat exports out of the Great White North are tracking 23 per cent higher year-over-year through Week 14 of the 2018/19 crop year. 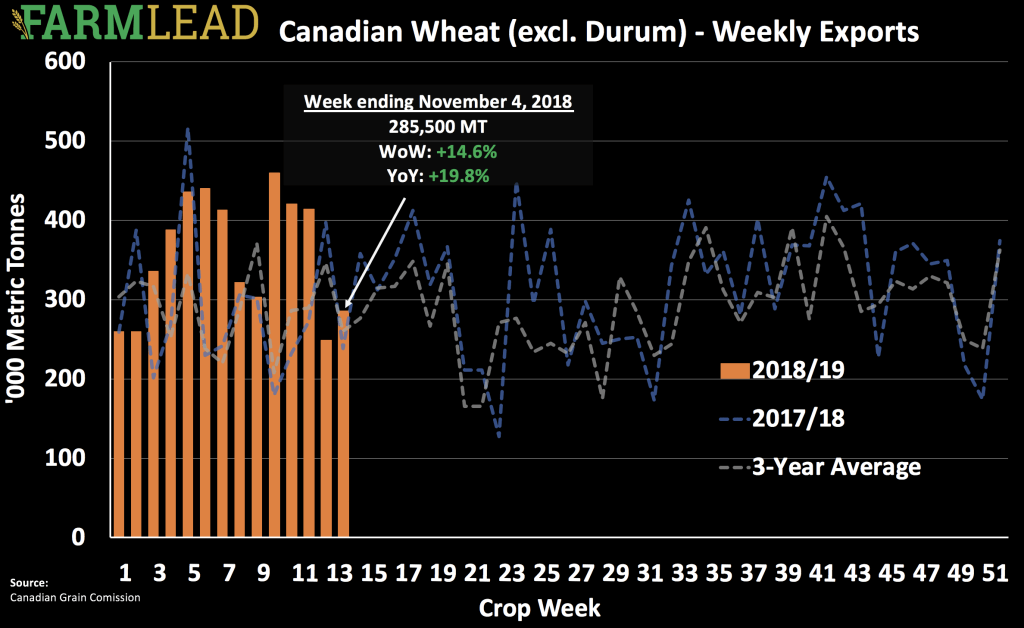 From a price standpoint, the wheat market lost double-digits on most contracts this week on all three of the exchanges. The December 2018 Minneapolis hard red spring wheat contract lost more than 7 cents to finish just below $5.75 while December 2019 lost nearly a dime to finish at $6.12.

For the winter wheats, we saw Kansas City lose nearly 17 cents on the December 2018 contract to finish just under $4.90 while the same contract in Chicago lost 7 cents to close at $5.02.

Overall, the market is pricing in the larger ending stocks today as the headline that continues to be the biggest takeaway is there’s still a lot of grain in the world.