Grain markets were able to find gains as they entered the first few days of November, mainly driven by some rumour-driven optimism around the trade war between the U.S. and China ending sometime soon.

After posting a monthly low to end October, soybean prices jumped about 4% in a few minutes on Thursday after a tweet from U.S. President Donald Trump saying trade talks are going “nicely.” This helped created some optimism and soybean prices for the week rallied about 25 – 30 cents across all contracts. Notably, the November 2019 new crop contract finished the week at US$9.33/bushel.

The optimism in an ending of the trade war comes about four weeks ahead of the G20 Summit being held in Buenos Aires. It also comes right before the U.S. mid-term elections, held on Tuesday, November 6th. With most of China’s tariffs are directed at red, farming states, even the suspicion of some diplomacy starting back up is welcome news not just for grain markets, but also its participants.

After all, U.S. soybean exports to China were down 80% year-over-year in September at just 132,000 MT. Comparably, Brazilian soybean exports to China jumped 28% to nearly 7.6 MMT! Overall, Chinese soybean imports in September were the smallest in two years and CNOIC says that total bean imports in the fourth quarter will likely come in at 20 MMT, down 17% year-over-year.

On that note, for the month of October, soybean prices on the Chicago Board of Trade closed nearly 1% higher than September’s finish, but they were still tracking about 14% below prices at this time a year ago. As you can tell from the chart below, soybean prices the last two years have been pricing larger global soybean inventories, not just the recent trade war. 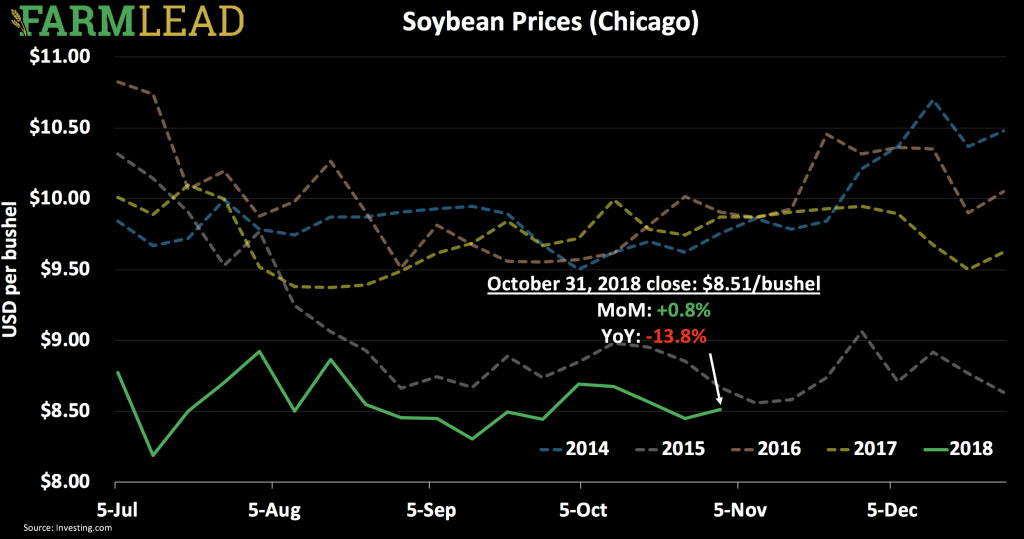 Comparably, canola prices weren’t able to track the same rally that soybean prices, falling significantly on Friday, with the January 2018 contract closing at $485.30. At one point though on Friday, they were sitting above $491 in the morning before the sell-off seen through the remainder of the day.

Quite simply though, canola prices are basically the most expensive vegetable oil right now on the market and a lot of the market has been noticing this possibility to the downside. The problem is, this argument has been made for roughly the last year. And that in mind, canola contracts hit new yearly lows this past Wednesday!

The elephant in the room for canola prices has consistently been the U.S.-China trade war, but with that possibly ending (as suggested above), might canola prices rise up significantly?

Should said trade war between Washington and Beijing (and its constituents) end, it’s likely that canola prices won’t likely rally as much as soybean prices will. This is mainly because the market has already applied a 25% discount to U.S. soybean prices.

Following this line of thinking, if the trade war ends, and the 25% tariff is revoked, then you’ll likely see soybean prices recover most of this discount. I have been quoted previously, saying that we might see beans climb US$1.25 to US$1.50/bushel in Chicago should a resolution be found. However, canola prices are unlikely to push higher by a proportional amount.

That being said, canola prices have been resilient on the recent increase in export demand. Through Week 13 of the Canadian canola 2018/19 crop year, exports are now sitting at 2.33 MMT, just 2.3% behind last year after a few strong weeks of shipments. Three weeks ago, canola exports were tracking nearly 16% behind 2017/18’s pace. 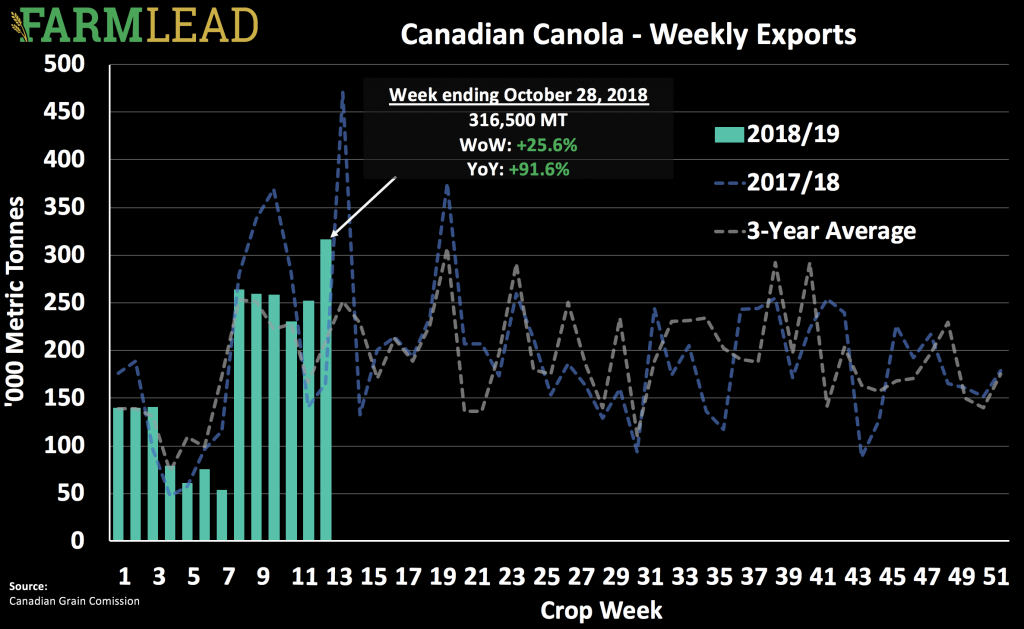 One of the demand factors for corn that’s been well-received by corn farmers has been the law pushed out from the White House that allows E-15 gasoline to be sold year-round (previously it was just 8 months). However, with the lack of infrastructure to support this, S&P Global Platts says that it could take as much as 15 years to see E-15 be sold nationwide! That being said, corn prices for the month of October lost 1.4%, but are up a little more than 4% year-over-year. 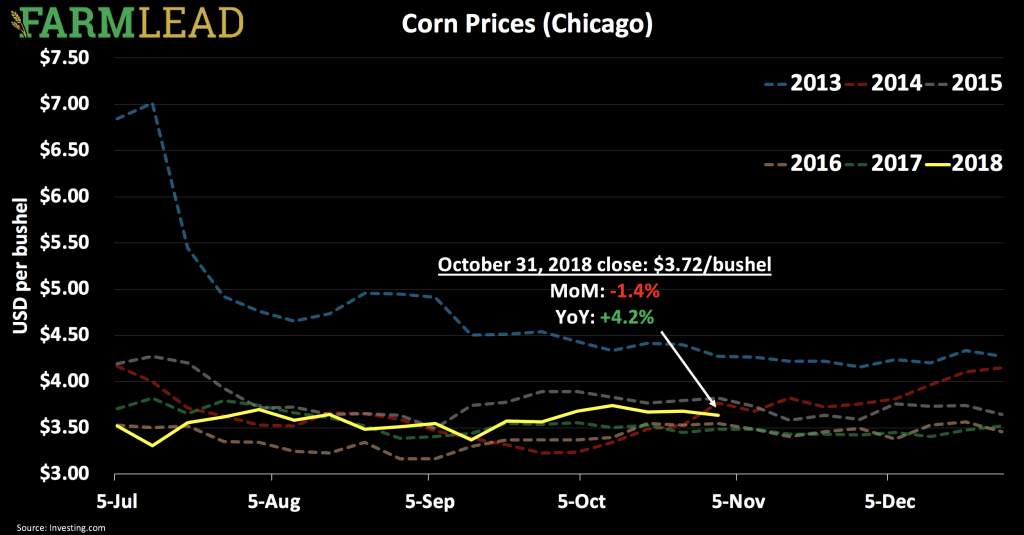 On the wheat front, front month contracts were able to gain 2 – 4 cents in Chicago, Kansas City, and Minneapolis.

Weighing on wheat prices this week was the announcement from Egypt that they’ve got enough wheat to cover them until March 2019. This means that U.S. wheat might not make it back into an Egyptian wheat purchase like it did last Friday) for awhile yet. Wheat futures jumped on signs of improving export demand as the United States gained a share of a large Egyptian wheat tender, along with Russia and Ukraine.

While it was a bright spot, winter wheat prices remain under press as actual U.S. total wheat exports are tracking 21% lower year-over-year, and the crop progress of winter wheat seeding gets back on track. 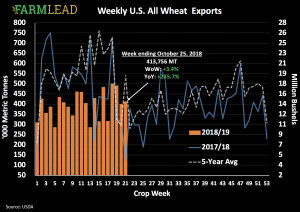 The 2019/20 U.S. winter wheat crop getting seeded right now is a bit behind the norm but the portion emerged isn’t too far behind the 5-year average, as per the USDA last Monday. Also worth noting is that 52% of the U.S. winter wheat crop for the 2019/20 crop year is rated good-to-excellent (G/E). Compare this to last year’s 58% G/E at this time of the fall and the 5-year average of 53%.

Elsewhere, the Ukrainian winter wheat seeding campaign has basically wrapped up with nearly 15 million acres planted, up more than 500,000 year-over-year.

In Australia, crop progress is switching over to harvested numbers as combined as just starting to fire up. It might be a quick harvest though as ABARES recently downgraded their estimates for the crop in the Land Down Undaa significantly. Specific to wheat, ABARES now is projecting a harvest of just 16.53 million metric tonnes (MMT). For canola and barley, they have been revised lower to 2.2 MMT and 6.9 MMT respectively.

All things considered, grain markets are fairly twitchy, looking at factors like geopolitical risk (read: trade war) and currency, instead of just the usual supply and demand fundamentals. This sort of higher volatility might be the norm for the month of November as the rumours of a trade war ending accelerate towards the G20 Summit in Argentina.

From the Field to the Futures — Grinding Through Harvest