On Wednesday, it was announced China would make its first major purchases of U.S. soybeans since the “trade war truce” made between the two countries at the end of the G20 Summit in Argentina. The purchase of over 1.5 MMT of U.S. beans, valued at more than $500 million USD supported soybean prices on Wednesday, as it was the largest one-day sale of U.S. soybeans in more than four years and the ninth-largest in the past decade.

This obviously pumped up and helped the entire grain markets rally for the day. However, the bullish love was short-lived as the market came to terms with the fact that there is still a lot of soybeans left to work through in the U.S. and the world. 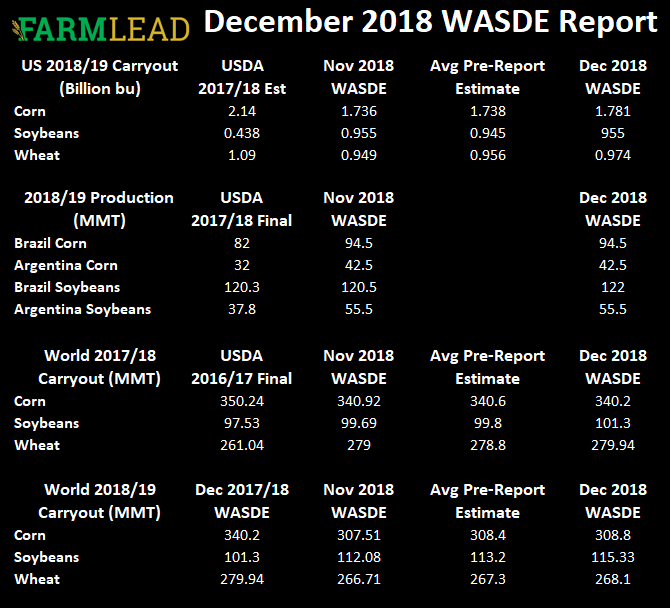 Thus, one sale like the one seen on Wednesday is healthy, you need a trend to really move the needle. This is especially true when you consider boats in Brazil waiting to load Brazilian soybeans set to get harvested over the next months. In fact, through Week 14 of the U.S. soybean crop year, 14.31 MMT of soybeans (or 525.8 million bushels) have been shipped out of country, which is down nearly 41 per cent year-over-year.

All of this combined is why you saw soybean prices pull back for the week, losing more than 15¢ USD/ bushel on the Chicago futures board to close barely above $9 on the January 2019 contract, down 1.8% compared to last Friday’s close.

Canola prices saw their own sell-off on Friday, with the January 2019 contract closing at below $478 CAD / metric tonne, or down nearly $8 on the week.

In this past week’s December WASDE, there wasn’t much of an update to the world of wheat.  As reminder, in November WASDE report, the USDA adjusted production and carryout numbers for China, which boosted corn and global wheat stocks significantly.

Globally, if we didn’t count a significant increase in Chinese wheat numbers from the November WASDE report, the total 2018/19 global harvest would’ve been lowered by 1.9 MMT. But again, with China, global wheat ending stocks were raised up to nearly 267 MMT.

Global wheat carryout for the 2018/19 crop year was raised by nearly 1.5 MMT from the last WASDE report, but this was mainly attributed to U.S. and EU wheat ending stocks climbing as a result of less exports.

On the bearish side, Russian wheat exports were raised by 1.5 MMT but Australian wheat exports basically offset that, as they were lowered by 1 MMT from last month, thanks to their smaller crop. In last Friday’s Grain Markets recap, I discussed how canola prices might be impacted by Australia, but we’re seeing some healthy activity for wheat prices thanks to the smaller crop in the “Land Down Undaa.”

With bigger Russian wheat exports, this will put some pressure on U.S. wheat prices for similar protein levels. Currently, Russian wheat exports are flying out of the ports, but it’s expected that the amount of exportable supplies are quickly dwindling. This likely translates to a window of opportunity opening up in 1Q2019 for other major wheat exporters.

This might already be getting realized though. While it’s easy to view better trade relationship between the U.S. and China being good for soybean prices, it might also be healthy for spring wheat: China has become the fourth largest buyer of U.S. spring wheat (mainly for blending purposes though). 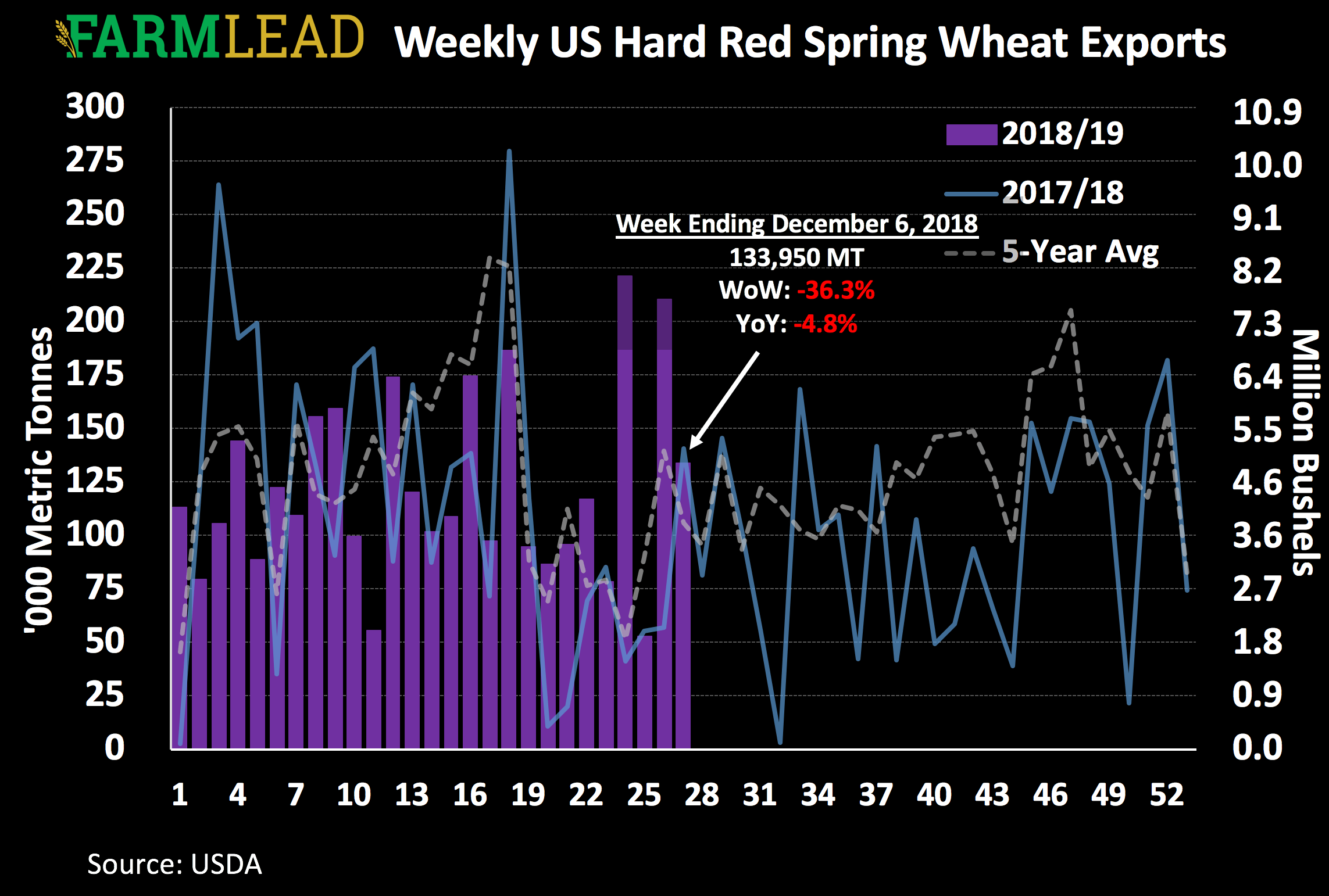 A similar dynamic has been seen in Canadian non-durum wheat exports, as China has been a very large buyer, helping support domestic cash wheat prices (and as mentioned in late September). It’s been suggested that they continue to be strong buyers of Canadian non-durum wheat, which is likely why current exports through Week 19 of the Canadian crop year are tracking nearly 19% higher; Marketing-year-to-date, 6.9 MMT have been exported from Canadian ports. 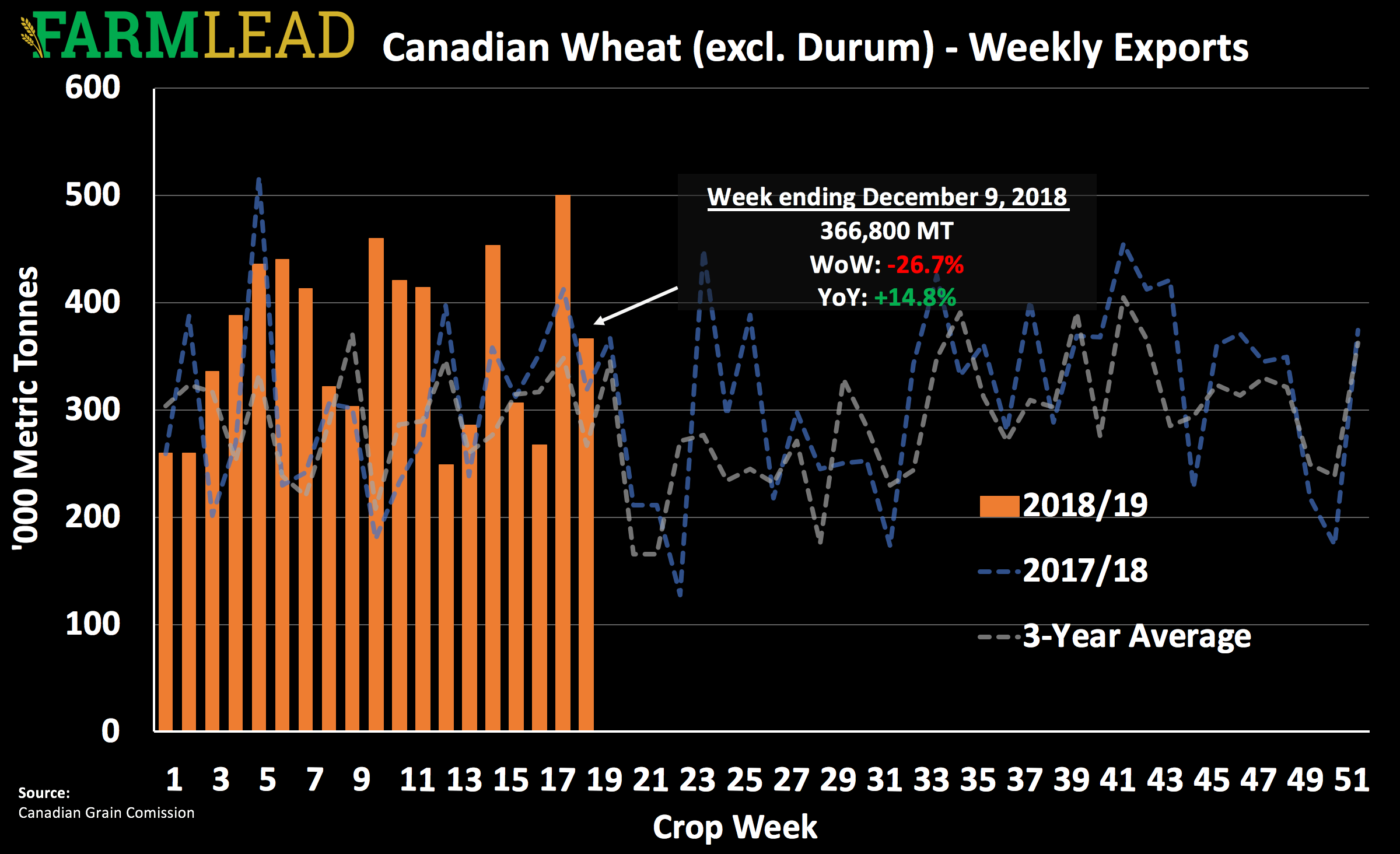 Technically-speaking, wheat prices are looking to end the 2018 calendar year pretty strong. Currently, soft red winter wheat prices on the Chicago futures board are up 24% since January 1, 2018, making it the best performer in the grain and oilseed complex. Worth noting is that oats futures are up nearly 20% while corn prices are sitting almost 10% better.

Something to keep in mind is Rabobank’s expectation that 2019 will be a correction year for wheat prices. Pretty much every major wheat producer/exporter is expected to plant more of the cereal for the 2019/20 crop year. Thus, while you and I are thinking about better marketing opportunities for wheat prices in 1Q2019, we should also be just as quick to consider 2019/20 wheat sales at the same time.

Finally to wrap things up, the Climate Prediction Center says that an El Nino is almost certainly being seen this winter, continuing through January. For North America, this usually means wetter conditions, and since this one is occurring over the winter, it’s likely to benefit winter wheat production the most. Worth keeping in mind though is that U.S. winter wheat acres are expected to drop to a 100-year low. The CPC also is estimating that the chances of an El Nino lasting through the spring for 2019 is about 60%. .

As it relates to the pulse trade, an El Nino is significant though. Typically, the weather phenomenon is typically associated with a drought or scant rains. We know that this doesn’t necessarily bode well then to produce pulses in the country’s winter rabi crop.

Keep in mind that country is already suffering from below-average monsoon rains and that pulse acres seeded thus far are lower year-over-year. Ultimately, as I’ve said many times (as has the rest of the industry now), a smaller rabi winter harvest of pulses in India might support more exports for the likes of peas, lentils, and chickpeas, but the import tariffs are unlikely to be removed any time soon.

Rain makes grain, not prices rally — This week in the grain markets