Except for oats futures, the entire grain complex enjoyed a week in the green as geopolitical risk and production headlines swirled.

On Friday, wheat markets had a big day as market participants responded to a week of strong U.S. export sales. While total export activity is down year-over-year, it’s a positive sign for future sales. This is mainly because, usually around this time of year, you start to see Black Sea wheat exports slow down, and southern hemisphere supplies start entering the market. However, there is going to be less solid quality coming out of Argentina and certainly lower quantity out of Australia (more on this in a bit).

This in mind, Chicago SRW wheat prices gained 3 per cent on the March 2019 contract to close above $5.31 USD / bushel, up more than 15 cents on the week. Neighbouring Kansas City HRW wheat prices were up 2.3 per cent for the week, or nearly 12 cents, to close at $5.12. Even new crop prices found some significant strength as buzz is starting that U.S. winter wheat plantings will hit another 100-year low. The September 2019 Chicago closed 4% higher at a couple cents under $5.50 while KC wheat was up 2 per cent to close just under $5.45.

As we’ve known for awhile, crops in the “Land Down Undaa” have suffered significantly this year without much rain to go around. This is especially true in Eastern Australia where harvestable acres have dropped significantly from first expectations back in June when the growing campaign was just getting going. This past week, we got an update from the Australian Bureau of Agricultural and Resource Economics (ABARES), confirming what everyone has been thinking.

Australian barley production was suggested by ABARES at 7.3 MMT, a drop of nearly 2 MMT from their first estimate back in June and a far cry from the 5-year average of 9.8 MMT. With this much smaller of a crop and a strong premium for feedstuffs in Eastern Australia helping keep domestic prices elevated, there are many question marks about the possible size of Australia’s barley exports campaign for the 2018/19 crop year.

We’ve been eyeing the Chinese oats market for Canadian exports and this year should be the year that the trade delegates should push hard on it. This is because production of 888,000 MT, down 20 per cent year-over-year means that China might need to look elsewhere to meet their growing demand for oats products.

Wheat production in the “Land Down Undaa” was felled to just 17 MMT, down nearly 5 MMT from the initial estimate back in June and a 20 per cent decline year-over-year. Since a lot of this decline was attributed to Eastern Australia where the higher-protein wheat is grown, there continues to be concern in the exportable supply higher-quality wheat around the world this year. 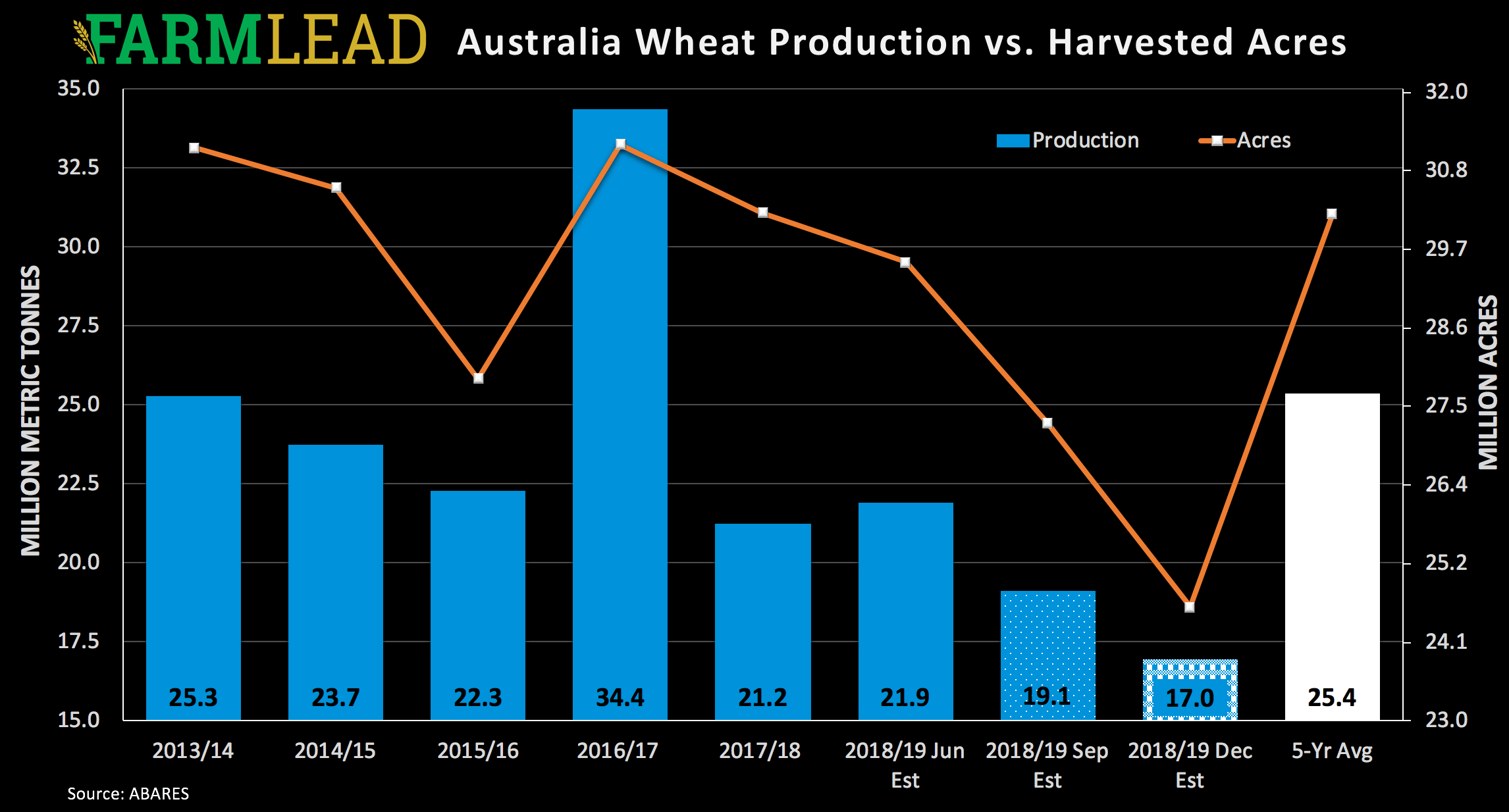 Very concretely, this is why you’re seeing some much higher spring wheat prices right now (I’ve been hearing of some targets above $8 CAD / bushel getting picked off! Nice!) On the futures board in Minneapolis, hard red spring wheat prices gained nearly 6 cents for the week, up 1 per cent, to close at $5.815 USD / bushel.

The gains likely would’ve been higher had it not been for a bit of a bearish production report from Statistics Canada on Thursday. Specific for total Canadian wheat production, the 2018 harvest was raised by more than 750,000 MT from the September data-based production estimate from StatsCan to 31.77 MMT. This is a 6 per cent jump year-over-year and slightly above the five-year average.

Spring wheat yields have surprised everyone, coming in at 50.5 bushels per acre, a full bushel more than the September estimate. Durum yields were also raised from the September report by 0.2 to 34.8 bushels per acre. While down from the 5-year average of 41.7, a total harvest this year of 5.74 MMT isn’t going to help durum prices without some demand to move through that sort of supply.

StatsCan tends to be bearish for their December report and so canola prices were expecting something along those lines but production was dropped by more than 656,000 MT to 20.34 MMT. While average Canadian canola yields were dropped by 1.3 bushels per acre from September to 39.8 bushels per acre in this December report, this still beats the five-year average of 39.5!

Here’s a breakdown of all the crop production estimates from StatsCan and their relevant changes from previous estimates this year, last year, and the five-year average. 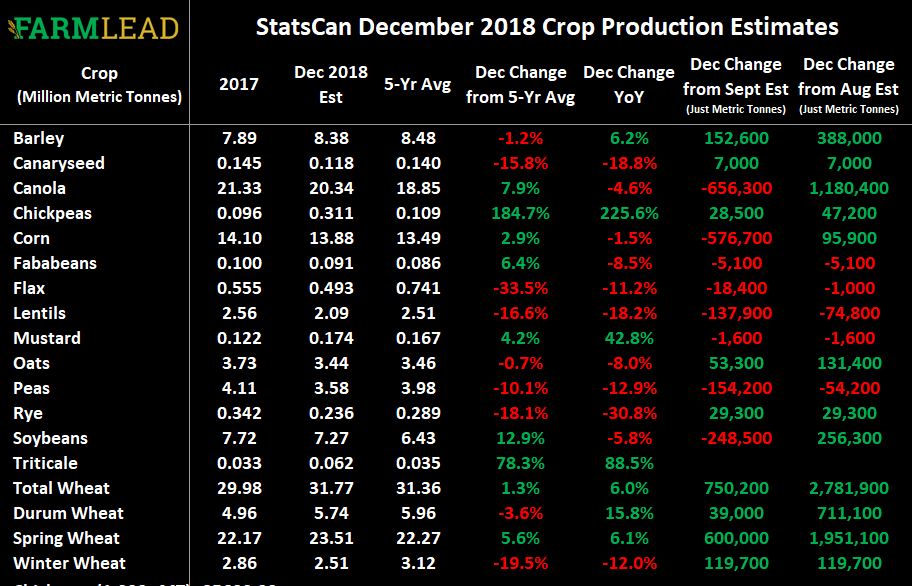 Coming back to the Land Down Undaa, canola prices also received some support from a bullish ABARES production estimate of just 2.2 MMT. This means Australia will likely need to import some canola this year to meet domestic processing demands (a lot of their non-GMO canola gets shipped to Europe).

Rounding out the complex, soybean prices were able to make some significant gains this past week, with most contracts closing 2.2 per cent to 2.5 per cent higher for the week. This includes the January 2019 contract finishing 22 cents USD / bushel higher in Chicago at $9.17 and the new crop November 2019 gaining 22 cents as well to finish at above $9.61.

The gains were mainly thanks to a agreement between China and the U.S. to a 90-day “tariff truce” with U.S. President Trump vowing not to increase tariffs on another $200 Billion worth of Chinese goods to 25 per cent (from the current 10 per cent) on January 1st. Conversely, Chinese President Xi has supposedly agreed to buy a “very substantial” (albeit unspecified) amount of industrial, energy, ag, and other products.

This basically all means that the next 90 days will be still volatile with rumours yet again swirling around trade deals being done or not. Add in the fact that markets are going to start contemplating the effects of a Brazilian soybean harvest starting this month. There are also question marks about what could happen to a record crop in Brazil if China and the U.S. do figure out how to end their trade war.