Grain markets ended the month of November mostly in the green as optimism around of the trade war between the U.S. and China ending helped pushing the complex higher. A lot of focus to end the month was down in Argentina, where this week’s G20 Summit is taking place and many meetings between country leaders and their trade teams are taking place.

Wheat prices are watching the stand-off between Russia and Ukraine, and if grain flows will be disrupted in the Azov Sea. For perspective, the freight route only accounted for about 6% of Ukraine’s total grain shipments in October, as most of Ukraine’s exports head out through southwestern ports.
For the most part, avoiding moving grain the region seems logical since it’s a definite unknown how tensions could flair up at any point but grain prices are watching for it closely.

Given the dump of snow last weekend across much of the western corn belt and part of the Southern Plains, it’s likely that the U.S. winter wheat seeding campaign in these areas is now finished. In last Monday’s USDA crop progress report, 95% of intended acres had been seeded, behind the 99% usually seen by this time of year. 86% of the U.S. winter wheat crop has emerged, versus the 5-year average of 92%, and 55% of the crop is rated good-to-excellent, down one point year-over-year.

On that note, both Kansas City HRW and Chicago SRW wheat gained 10 – 20 cents (per bushel) for the week, but they did lose at least a quarter on all contracts for the month.

Rounding out the crop progress report, 94% of both U.S. corn and soybean fields have been harvested, slightly behind their 5-year averages. While the 2018 crop is nearly in the books, Plant 2019 conversations are starting to heat up.

With soybean prices where they’re at, it’s widely expected that we could see a drastic reduction 2019 U.S. acres, dropping 5-6 million from the 89.1 million planted in 2018. It’s been suggested that a lot of these lost soybean acres will be in wheat country, meaning it’ll go back in to the cereal.

The USDA is estimating 51 million acres of all wheat planted for the 2019/20 crop year, but grain prices might start factoring in a larger spring wheat base. For context, we also know farmers in Russia, Europe, Australia, and even Canada are likely to plant more wheat for next year’s harvest.

There are a fair amount of those 2018 soybean acres that will also go into corn as that’s the main go-to in many areas, since there’s not much else to be planted. Yes, there’s options of wheat (as mentioned), as well as potentially sorghum, oats, and/or barley, or even canola and flax in North Dakota and Minnesota, but in most states, corn is the easiest fall back crop. There are some question marks about corn acres going too, too high as chemical and fertilizer costs are rising, also a by-product of the trade war. All things considered though, corn prices are performing pretty well right now. 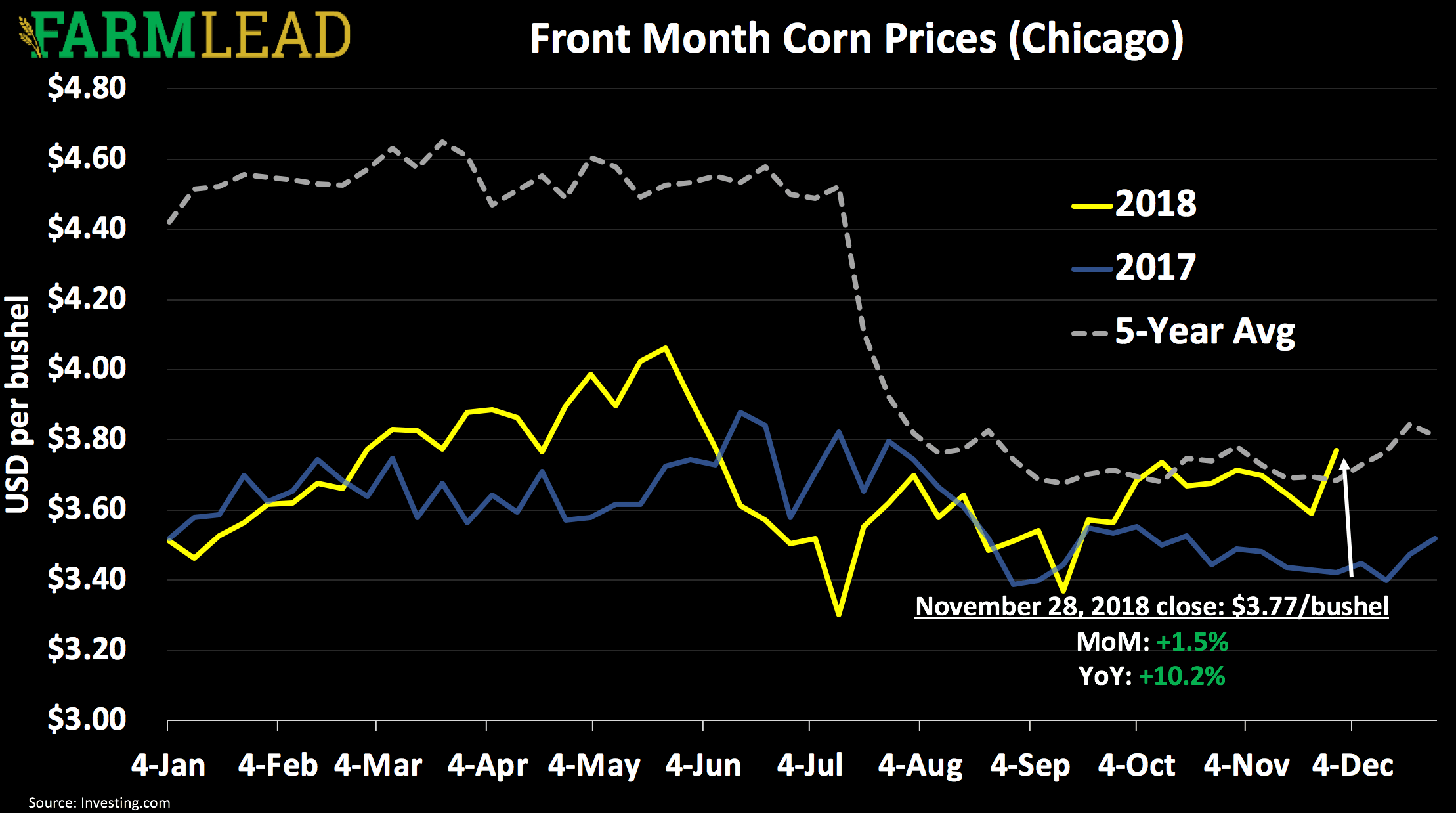 Getting into soybeans, for the past month, there’s been a lot of speculation about China and the U.S. coming to terms on ending their trade war but as we’ve gotten closer to get-together, optimism as declined. U.S. President Trump has already indicated that he’ll put another $265 Billion in tariffs on all Chinese goods not being taxed thus far.

It would include the likes of iPhones, tablets, and laptops, which would likely be a direct hit to the U.S. consumer. However, instead of the usual 10% tariff rate that’s been implemented on previous rounds of tariffs, President Trump says the rate will be 25% if a deal isn’t reached.

The theory that holds right now though is that the economies for both the U.S. and China are looking for something to give them a feel-good story going into the holidays and so some sort of positive announcement is likely being priced in.

Of course, what the details are behind this announcement are, are still unknown. However, rumours have been swirling that there will be some sort of announcement that will kick the can down the road. Specifically, the buzz is that the U.S. will agree to not impose any new tariffs on Chinese goods and vice versa, in addition to the U.S. having a say in the Chinese long-term economy policy planning.

Finally, the new NAFTA, also known as the USMCA, got signed by the U.S., Mexico, and Canada down in Buenos Aires at the G20 but the what’s still not solved is the steel and aluminum tariffs that the U.S. has put on its two main trading partners

Should a deal to end the trade war be reached heading into December, there’s some speculation that we won’t see the same sort of soybean demand from China though as they’re dealing with the African Swine Fever hitting their hog markets. Also potentially slowing imports is the fact that China is currently sitting on 7.45 MMT of soybean stocks, a decade-high for this time of year.

In October, China shipped in 6.92 MMT of soybeans. 94% of it came from Brazil. It’s estimated that December soybean imports are expected by more than a third year-over-year, from nearly 9.6 MMT in December 2017 to 6 MMT this year. Finally, one estimate has pegged 1Q2019 imports somewhere between 11 -12 MMT, well below the 19.6 MMT shipped in during 1Q2018. With slowdown in demand is specifically related to decline in soymeal demand as hog farms don’t replenish their herds as aggressively in years past.

On that note, canola prices did make some gains this week, but for the month, values are down 1 – 1.5%, depending on the contract you look at. Slow domestic demand, strong farmer deliveries, and a slower-than-expected pace of exports are to blame. 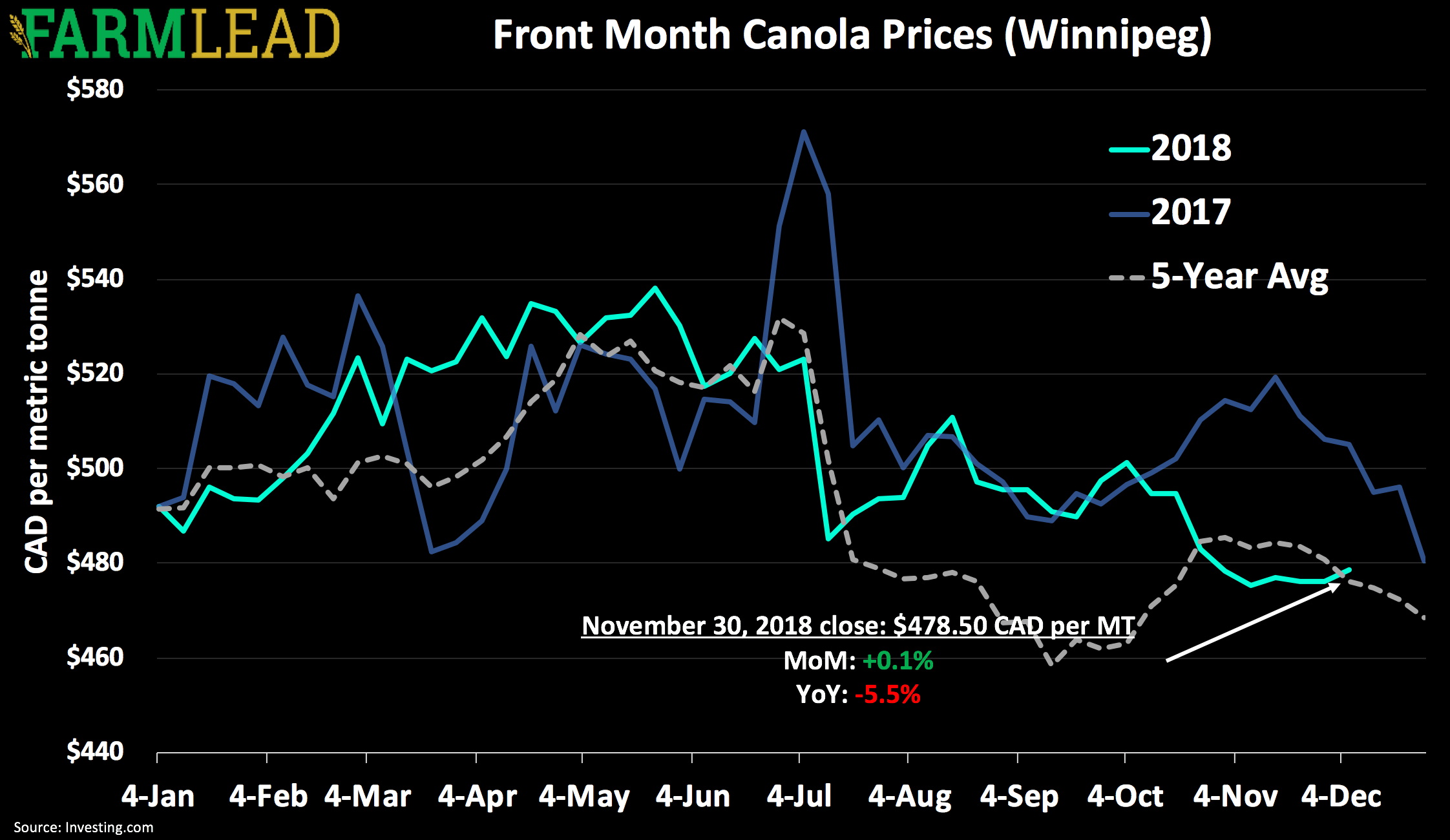 Going forward, December could continue to be rocky (read: volatile) as the markets continue to try and figure out where geopolitical risk and grain trade flows are heading.

Agriculture is a highly competitive global industry that many times receives special attention from governments around the world to ensure farmers survive. This support, of course, takes many forms: subsidies and protectionism, or a commitment to research and export market development. For the past three years North American farmers have been dealing with scarce profits…Read more »