Grain markets are mixed as we start the first full week of the 2019 calendar year of trading with trade negotiations between the U.S. and China wrapping up, all while the U.S. government shutdown remains. This meant there was no WASDE report released on Friday — the day it was supposed to be .

In this report, we would’ve been looking for updates on South American production estimates as well as U.S. corn and soybean exports. Also, the USDA was supposed to release its estimates on U.S. winter wheat acres for 2019, but alas, the USDA is quiet as long as no one working there is getting paid!

On that note, Informa is estimating 2019 U.S. winter wheat seeded area at 31.513 million acres. This would be a 3.1% decline from 2018’s 32.535 million acres. Also coming from Informa was estimates for soybean production in South America. For Brazil, the firm is estimating 122 MMT (matching the USDA’s estimate), while calling for 56.5 MMT of production in Argentina (1 MMT more than the USDA).

Of note for Brazil, it has some dryness carrying over from December into January, especially in the southern region. Those beans that were planted super early (and, thus, expected to be harvested early) likely will see below-average yields in the combine. CONAB is already acknowledging this, downgrading their estimate of the Brazilian crop to 116.9 MMT. My gut today says this Brazilian crop could get smaller as the harvest goes on.

That being said, wheat prices are facing some headwinds as the Argentine harvest wraps up, with 91% of the crop now harvested. It’s estimated that about 14 MMT of the forecasting 18.7 MMT Argentine wheat harvest will be exported, with the Rosario Board of Trade suggesting that already 6 MMT of these exports have been contracted. There were some rains over the holidays that likely had a negative impact on quality, so I’m a bit cautious of the competition for higher protein, something I maintain a bullish stance on for wheat prices in 2019.

As discussed in that recap of 2018 grain prices last week, no single factor had a bigger impact on grain markets this past year than the trade war between the U.S. and China. Looking forward, there are less than 60 days left in the truce between Beijing and D.C. for implementing more import tariffs.

U.S. President Trump continues to tweet out optimism for a deal being found but the deal likely has to include concessions from China on things like trade imbalances and intellectual property abuse. Will they do it though?

As long as there is the distance on the table between the two sides, it’s likely that grain markets will assume that a deal to end the trade war won’t get done. And if that’s the case, then projections for U.S. soybean exports likely have to fall from current levels.

One of the things we should definitely be aware of for 2019 grain markets are the usually cyclical patterns. For example, in 5 of the last 6 years, the highs in corn prices have been found between mid-May and mid-July. The exact moment that high occurs is certainly a condition of Mother Nature’s provision of good or bad growing conditions.

If we take the calendar year a bit further, we know that the best corn prices aren’t usually seen during harvest time. More specifically, September and October aren’t usually the best times to be contracting, but rather that’s when you should be trying to deliver on contracts made during the previous months.

This isn’t just specific to corn prices. It’s a very similar situation for canola prices and wheat prices, or others that have a futures board where outside speculators have an influence. Ultimately, if you see the market starting to push higher in early-to-mid-May, then you should be selling into that strength!

One of the biggest factors often overlooked in grain markets is the macroeconomic influence of monetary policy. This is the strategy implemented by a central bank – namely the U.S. Federal Reserve – to help maintain stability in markets by “influencing the amount of money and credit in the U.S. economy”. For 2018, this monetary policy in the U.S. and Canada was marked by several interest rate increases.

Going forward into 2019, most economists agreed that the Federal Reserve’s – or “the Fed” as they’re commonly known – must avoid a recession by keeping inflation in check while allowing for modest growth. That being said, there are a lot of factors suggesting the U.S. economy is tracking well to start 2019, bond yields and stock markets are suggesting a higher risk of continued to depressed growth. This is especially true as other international economies have slowed.

On this note, the Wall Street Journal recently reported the at a major economic conference held in Atlanta, “a widely held view was that a deceleration in growth is inevitable thanks to rising global threats, Washington’s instability, and a fading boost from the tax cuts.”

If you start to see economic growth slowing, then it’s very likely that the likes of the Fed and the Bank of Canada won’t continue their trend of increasing interest rates. That being said, if they do ignore some of the bond and stock market indicators, and interest rates continue to rise, the impact on farmers is notable. More specifically, it might be worth looking at changing some of your variable rate financial products to a fixed rate.

Coming back to the current markets, while we didn’t get any data from the U.S., Canadian grain exports of pulses and barley had some solid results to start the new year. Specifically, peas and lentils had their biggest one-week shipments so far in 2018/19. However, everything else was a bit slow for Week 23 of the 2018/19 Canadian crop year. 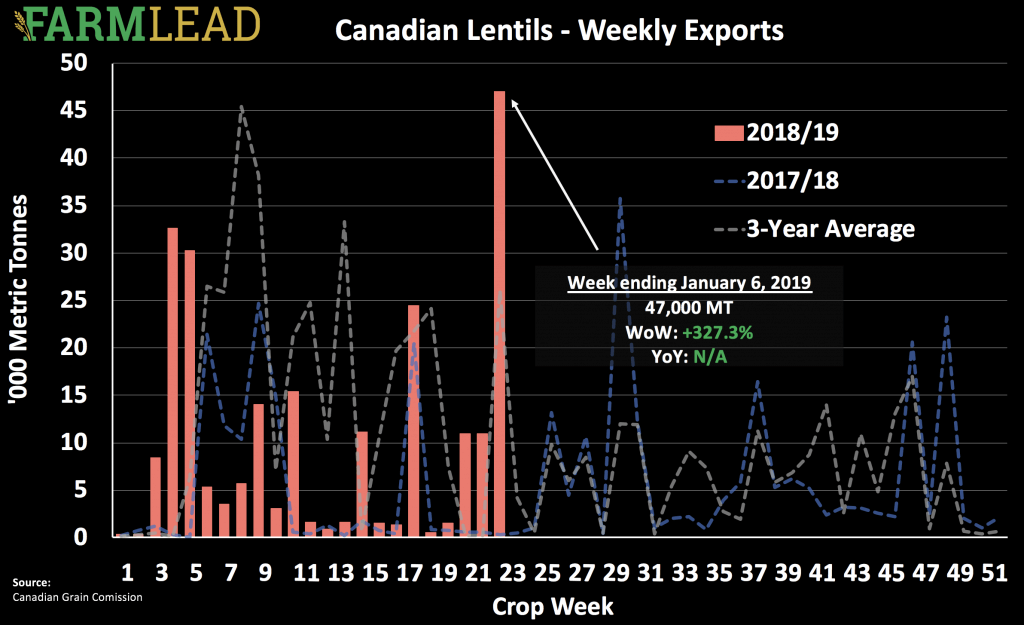 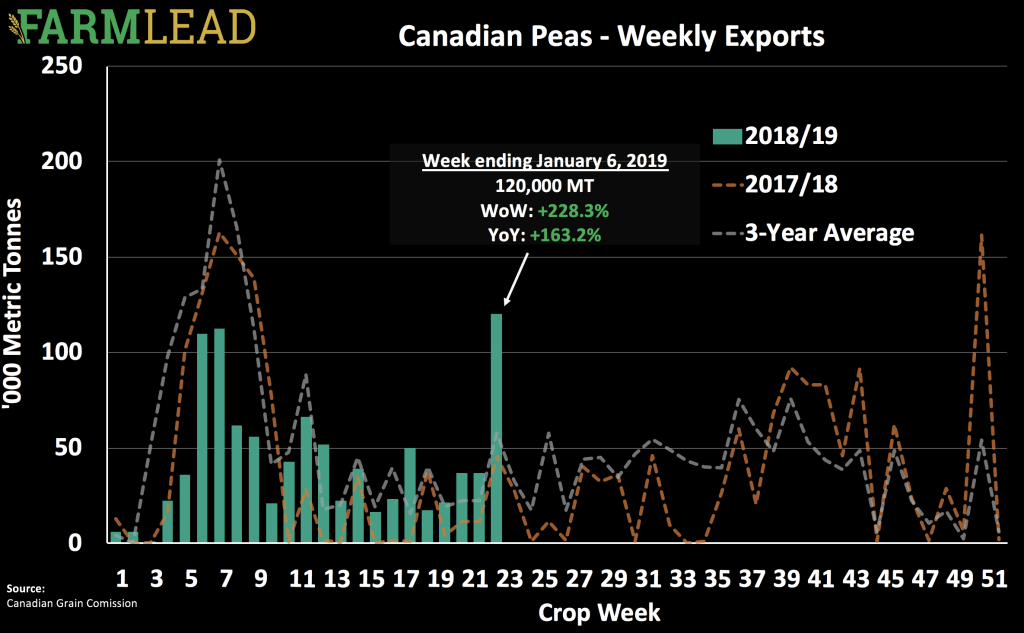 Here’s a breakdown of how 2018/19 Canadian grain exports from licensed exporters are performing compared to the same point in 2017/18:

Ultimately, grain markets in 2019 will largely be a function of the usual players: acres planted and Mother Nature. The newest variable though – a trade war and/or protectionist policies – will have more of say, especially to start the new year. This genuinely means that there is quite a lot of market uncertainty. With uncertainty comes volatility. And with volatility comes opportunity (from a trading standpoint). However, this also means rushed risk to the downside.