Grain markets were mostly able to squeak some gains this week despite limited news, other than it looked like there would soon be an end to the U.S. government shutdown. However, pessimism in getting a deal to end the trade war between China and the U.S. kept gains in check, and actually kept corn prices in the red. Specifically, front-month March 2019 corn prices lost 0.4% for the week to close at US$3.80/bushel at Chicago.

Meanwhile, wheat prices in Chicago were up 0.65% for the week to close at $5.21 but this was down from the highs hit earlier in the week. Canola and soybean prices on the futures board both made notable gains, with the Canadian oilseed up 0.7% for the week while its American bean counterpart gained 0.75%. For canola, front-month futures prices closed at $487.60/MT, the first time it’s been that high since about October.

Soybeans closed just above US$9.23/bushel for the March 2019 contract, nearing highs made earlier in January. The bean has been continuing to find strength in hot weather in Brazil. The dry weather in Brazil is also supporting canola prices a bit, and thus, we’re close to seeing $485/MT on the March 2019 contract. This despite Canadian canola exports continuing to perform poorly, now down 10% year-over-year with just 4.76 MMT shipped out through Week 25 of the 2018/19 crop year. 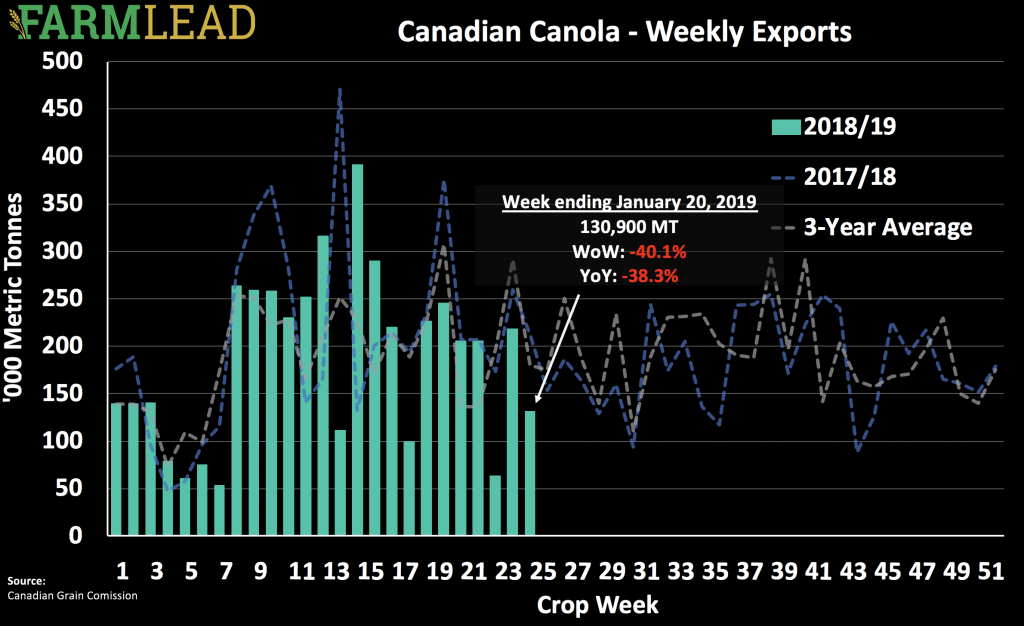 Even without the USDA releasing data thanks to the ongoing government shutdown, as we get closer to the spring time, there are going to be more estimates coming out on acreage expectations. Right now, there’s some heavy consensus that you could see fewer soybean acres in fringe states like North Dakota and Kansas. Further, you have seen the likes of Missouri drop soybean acres by more than one million acres in just one year, back in 2015. Could it happen again?

This is a result of dry weather in more than a few parts of Brazil, something that is expected to last into early February. It’s estimated that now that 6% of the Brazilian soybean harvest is complete but it’s mostly in the north where combines are rolling. That said, for the crops that are in still in bloom and/or pod-setting stages, the moisture is very important, but without the raise, the Brazilian soybean crop could lose 2% to 4% yield potential per week of severe dryness.

Coming back to American acres, for corn, Farm Futures is estimating 90.3 million acres of corn to get planted. Comparably, I recently said that if soybean exports remain weak and corn exports remain strong, we could see U.S. corn acres jump up to 93.5 million! Corn prices are tracking a good bit higher year-over-year. Worth noting is the incremental gains made through the middle of May in the 2017/18 crop year. 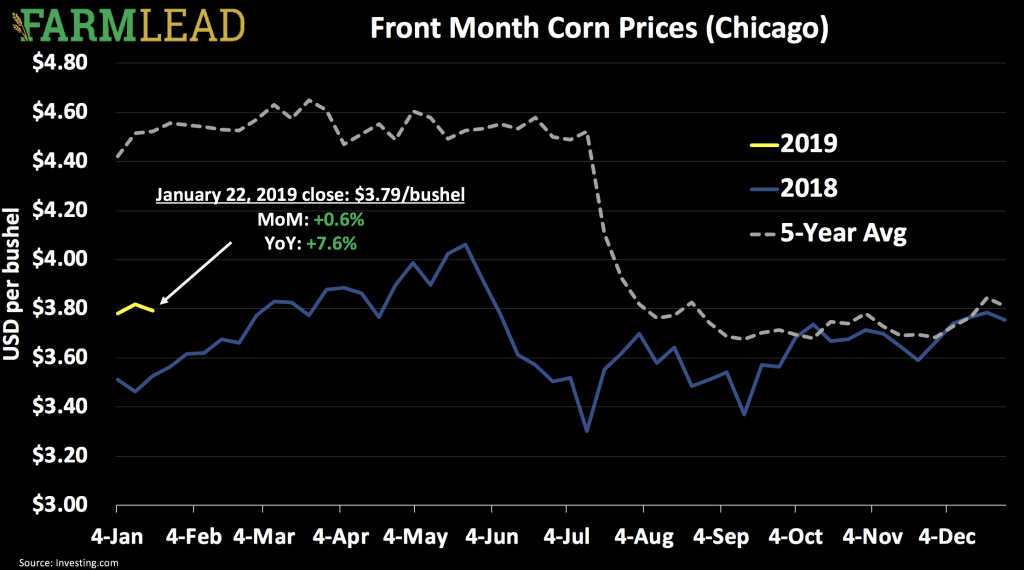 There is some speculation that corn prices could top $5 on the Chicago futures board in 2019, but I, along with more than a few participants at the Top Producer Summit in Chicago this past week don’t think that’ll happen. However, analyst firm Stewart-Peterson notes that more factors are pointing towards a rally. More specifically, the firm states that “when indexed to history, we see an 83% chance that December (2019) futures will trade above $4.25 during the calendar year 2019.”

Meanwhile, U.S. wheat acres (all types) are forecasted by Farm Futures to hit 46.6 million, which would be down year-over-year. This, however, when everyone else and their mother are planting more wheat in 2019. This includes more acres in Russia. On that note, the International Grains Council recently raised its estimate for the 2019/20 global wheat harvest by 8 MMT to 1.076 billion.

Before we get to the 2019/20 crop year, we must get through 2018/19 and it appears exporters in the Black Sea want 2019/20 to show up soon. Dwindling wheat stocks in the likes of Russia and Ukraine are starting to support wheat prices. Since mid-2018, the two Black Sea exporters have been shipping out wheat at a torrid pace and it’s starting to show. This is something that we discussed in detail in our recap of 2018 wheat prices a few weeks ago.

Earlier this month, the Russian Agriculture Minister said that they’re looking to control domestic grain prices (namely wheat prices) through the means of subsidies for rail freight. By supporting the cost of freight to pull wheat from locations further away from the ports, this would help maintain a port price that’s still competitive on the global level.

The alternative, of course, is that the port price of Russian wheat would go up, since it’s costing exporters more to get it there. Should that be the case, then you’ll likely see wheat prices from the likes of the U.S., Canada, Europe, and Argentina become more competitive.

In Ukraine, more than 83% of the agreed volume of milling wheat exports has already been shipped. This, despite more than five months still left to go in the 2018/19 shipping season/crop year. That said, the Ukrainian Ministry of Agriculture there has urged those in the wheat exports game to comply with the limitation memorandum set a few months ago. It’s to be determined if the players will all follow the rules!

On the geopolitical front, an end to the U.S. government shutdown would mean that we would finally get information out of the USDA. This would include export sales and shipments and previously unreleased reports like U.S. winter wheat acreage and the January WASDE report (albeit, maybe, given the current date, they just wait until the next scheduled WASDE release on February 8th?).

Meanwhile, the trade talks between China and the U.S. are settling in on talking about the trade imbalance between the world’s two largest economies. The trade disruption between the two countries, as it stands today, is easily the biggest discussion topic at the World Economic Forum this week in Davos, Switzerland. The second is slowing global economic growth. Even the International Monetary Fund says that there are increasingly more risks to “downward corrections”.

Ultimately, there continues to be a general lack of quantifiable headlines in grain markets, which is keeping most traders on the sidelines or from making large, heavy bets. Most of the complex is looking for a major event – something like an end to the trade war or Russia  cap its wheat exports – before betting a bit heavier again.

Canola School: Harvest Management — It’s Not All or Nothing

Port of Churchill moves under 100% local and Indigenous ownership

Canola School: Preparing to Straight-Cut, then Swathing Too