It’s not the greatest news to start of the winter learning season — corn growers need to be on alert for a new leaf disease making its way towards Canada.

Speaking at the Southwest Agricultural Conference, Martin Chilvers, field crop pathologist with Michigan State University, says tar spot has moved swiftly out of Indiana and Illinois in 2015, and in to the eastern half of Michigan in 2016. In 2017, the fungal infection was severe enough in some fields to cause 40 bushel per acre losses, and up to 50 bu/ac with other combined factors.

“In 2018, it really blew up in 26 counties in Michigan,” Chilvers says in this RealAgriculture Corn School episode. 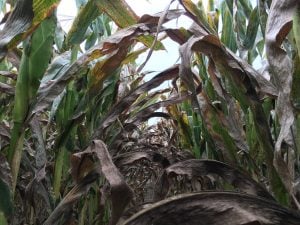 Characterized by tar-like speckling on the upper surface of corn leaves, the fungal pathogen has been showing up earlier in the season each year, Chilvers says. In 2018, it was spotted in July, and by mid-August it really went haywire in just a month.

While the disease was limited to the eastern half of Michigan, Chilvers says it could make the move to the western half and into Ontario’s Essex county by late 2019, based on how quickly it moves.

Because it’s a new-to-North America disease, genetic resistance will be key to keeping this at bay, but there’s limited information at this point comparing hybrids. Chilvers says some resistance has been observed, but it was combined with standability issues in some locations. Fungicides are an option, preferably those with two or more modes of action, Chilvers says, but there’s still much work to be done on assessing the best product and ideal application.

The bottom line, as you’ll see in this Corn School, is keep an eye out this summer for this new threat to corn, especially in those counties most likely to see the fungus move in, as early as this growing season.