Happy New Year! I hope you find this first post of 2019, rested, yet filled with memories from the holiday season. For some of you, including yours truly, might be weighing in a little heavier after some big family meals — one could say that this always happens. That repeatability continues on to the New Year’s Resolutions and the (re)start of a workout regime. However, this sort of familiarity was something that was not found, in the 2018 grain markets. Let’s explore why.

Quite simply, a new era of political protectionism and populism drove global grain markets in 2018 as countries strove to support their domestic economies through inward facing policies. To be fair, most countries like the U.S., India, and even the United Kingdom saw more of a nationalist approach to political-savviness, albeit it was not completely accepted across the spectrum. One could argue that the globalized citizen became less of one in 2018.

Now, I’m not here to say the approach of the current trade war between the U.S. and China is the right approach, but what it definitely did, was create an unknown playing field for grain markets, and one that was extremely tough to play on. There have been some comparisons to the likes of the 1970s and 1980s when you saw embargoes on specific countries like Russia for wheat. However, the reality is that we live in a much more globalized economy, and so when one major economic player like China or the U.S. shifts its trade policy, the whole world is affected.

Every week from basically February 2018 onwards, a tweet from the Oval Office brought a potentially different outcome than the previous week for grain markets. With China such a large consumer of agricultural products, namely soybeans, we felt the reverberations each week as policy rumours floated around like wildfire. The impact of the trade war has been quick and significant: U.S. soybean exports are down 40% year-over-year. 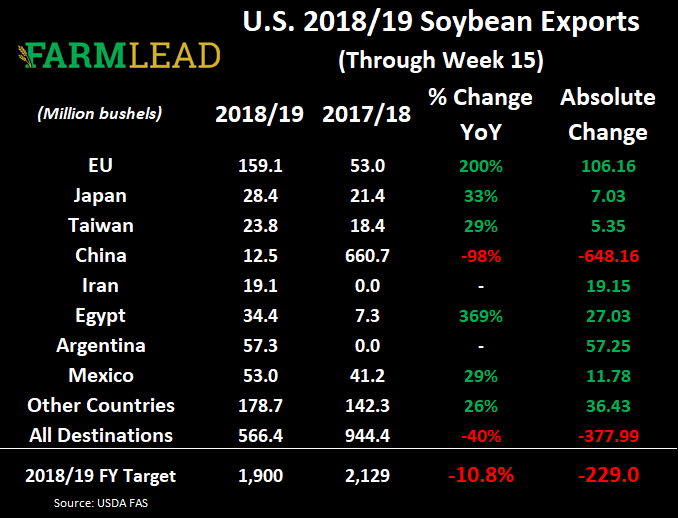 Will the USDA downgrade their current forecast? We might not know since the U.S. government is technically shut down and it’s likely that the January WASDE report – a very important one – will be delayed.

The U.S. was not the only protectionist player at the table though. We’ve seen Italy batten down the borders in terms of the durum trade, let alone some of their other “special products”. This threatened the signing of the Canadian-EU free trade agreement (CETA). We also know it’s a significantly negative impact on Canadian durum exports (down 14% through Week 20 of the Canadian crop year), and thus prices (down 17% year-over-year). 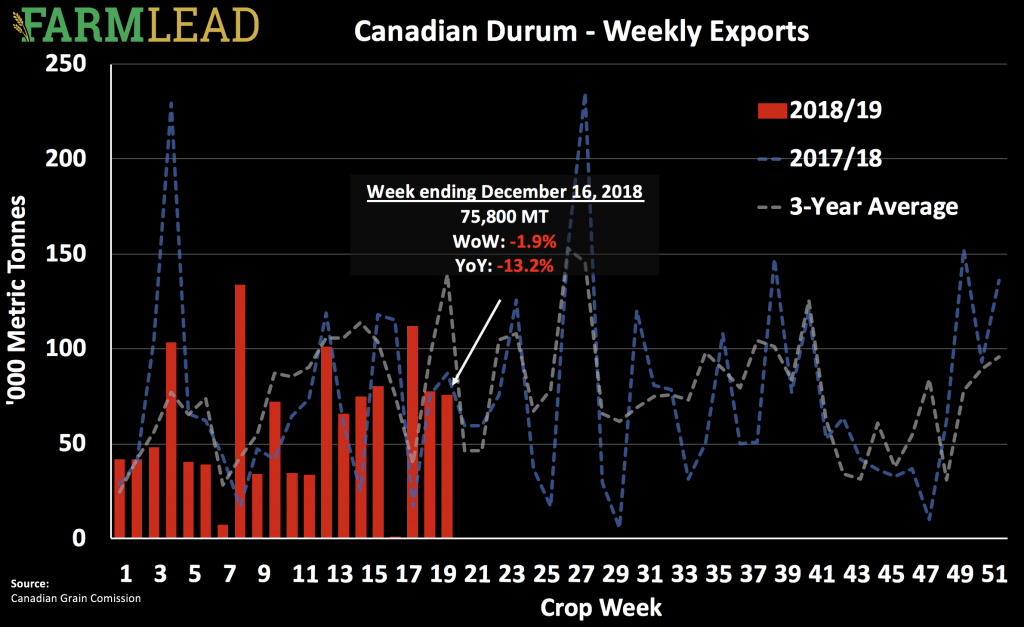 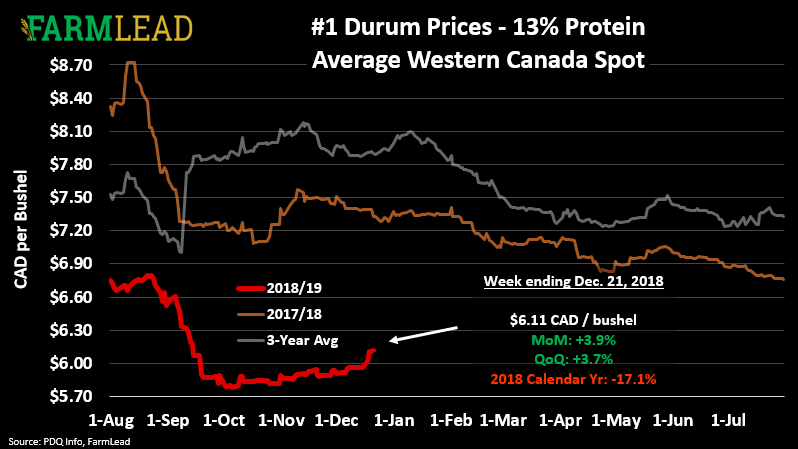 Then, you have India where the Modi federal government has chose to support their own farmers at all costs. While I understand and respect the purpose behind this initiative, the policy flip-flopping is one that’s been criticized by many, (including yours truly) and the impact on the trade of Canadian peas and lentils has been more than negative. Pea and lentils markets found new multi-year lows in 2018 but it has forced exporters to find new markets, and we are starting to see a bit of rebound!

While lentil prices are still below where they were a year ago, pea prices has made new one-year highs. More specifically, we’ve seen yellow peas trade back up above $7 CAD / bushel and green peas above $10! 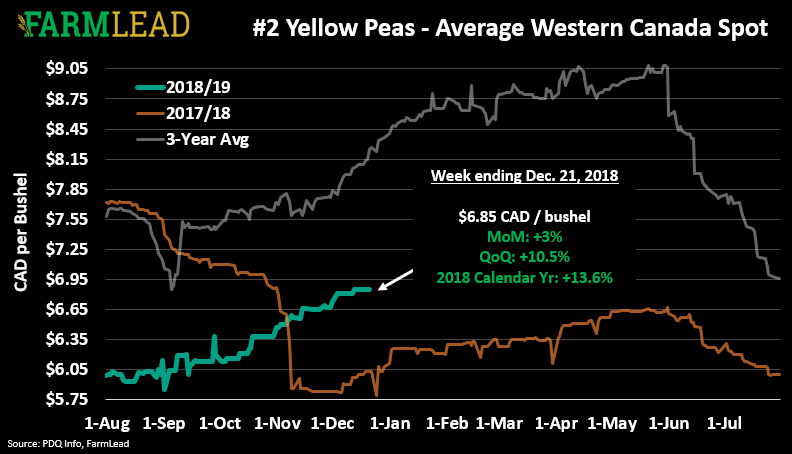 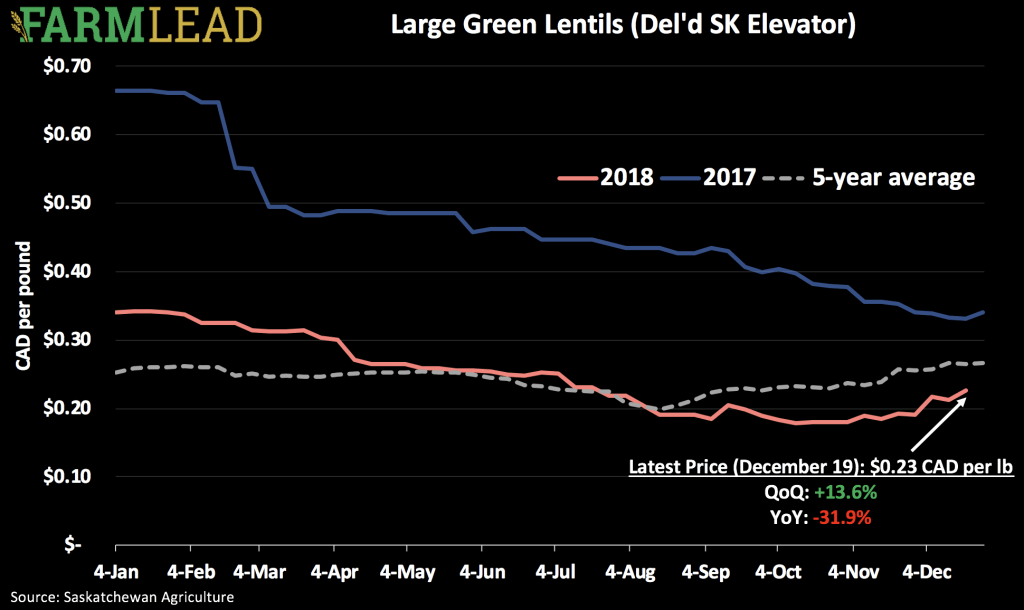 On the positive side, we did see a few more free trade deals come through, including the CPTPP agreement between 11 Pacific Rim countries, including Canada. This deal will see more opportunities for Canadian agricultural products to make their way into the growing middle class of Asian economies including Vietnam, Malaysia, Japan, and Singapore. This has been already especially positive of wheat markets, with exports and prices for most wheat classes (except for durum) performing better than this time a year ago. 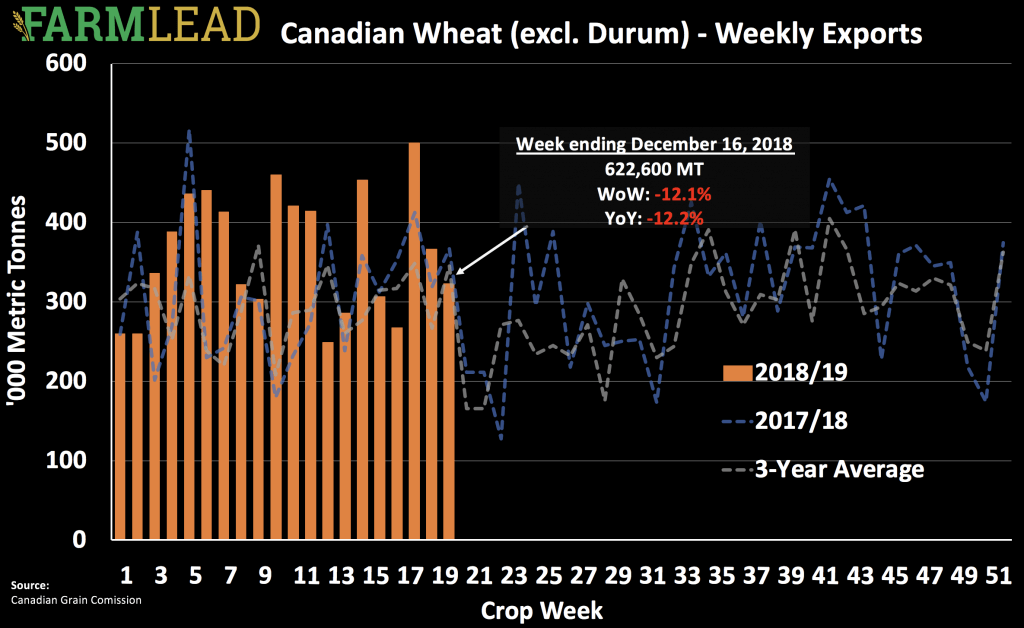 As a reminder, U.S. President Trump opted out of the CPTPP deal back in January 2018 but has suggested that he’d be open to coming back into the deal if the terms were improved for the United States.

Also, the new NAFTA agreement between the U.S., Mexico, and Canada — appropriately named the USMCA — should help guide trade within North America for the next few years. While it took awhile to get to the new free trade deal, the deal has a new troubling clause that requires a USMCA member country to provide notice and information to the other two partners if it plans free trade talks with a “non-market” economy. As a result, it may give the other USMCA partners the ability to influence the text of such a new free trade deal.

Overall, geopolitical risk will continue to be the driver of grain markets in the early days of 2019. For the likes of corn, soybean, wheat, and canola, be cautious of hoping for prices to keep going higher and sell into those rallies; after all, there’s a healthy amount of supply for all of these crops still available at home and around the rest of the world. 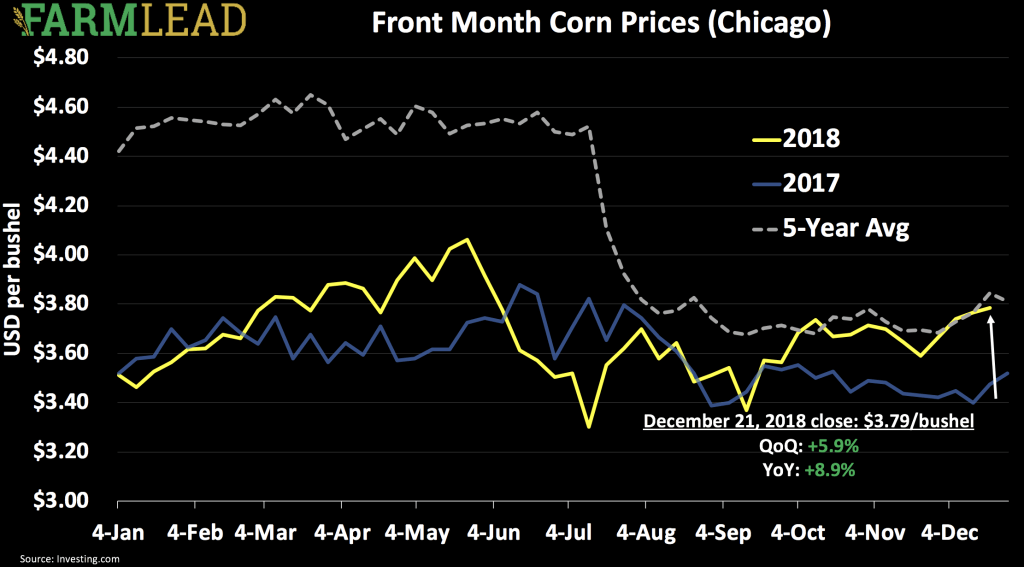 While canola prices are certainly influenced by soybean values, wheat and corn prices continue to perform relatively well. Thus, it’s more than likely we’ll see increased acres for these two crops in 2019. Given where prices are today, the question you should be asking yourself is whether or not they’ll be there a year from now. Secondarily, should you be contracting some now before more acreage estimates start piling up? We’ll explore more of the outlook for 2019 next week, but this should get you thinking before then. 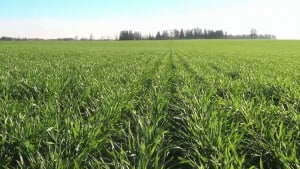 Who owns all the grain? — This week in the grain market

Logistics putting on the pressure — this week in the grain markets