Grain markets performed well on Friday, January 18th, to help them recover some losses from earlier in the week. Oats, corn, soybeans, and canola all made positive gains compared to the previous Friday, while wheat prices ultimately closed 0.5% lower for the week, despite gaining a few cents this Friday. Ultimately, grain prices continue to swirl, as there’s not a lot of clear direction on the U.S./Chinese trade negotiations and USDA data (the U.S. government is still shut down so they’re not publishing anything!).

A lot of the talk across the grain markets has been circling around U.S. and Chinese trade war discussions. This week, delegates from both sides met in Beijing while China’s so-called economic czar, Vice Premier Liu Hie, will head to Washington at the end of January in an effort to accelerate trade war negotiations.

There has been some suggestion from the U.S. side of the table that they will start lifting tariffs on Chinese goods in an act of goodwill towards the ongoing negotiations. Conversely, the Chinese have extended their own olive branch, proposing that they can commit to purchasing $1 Trillion of U.S. goods over the next six years to reduce the trade deficit the U.S. has with China. Early rumours from the American side of the table though is that they want to see that sort of volume in the next two to three years — not six!

This sort of buzz has certainly been positive for soybean prices, but most traders were more focused on weather maps down in South America. The Commodity Weather Group is expecting dry weather to continue to linger over at least 20% of Brazil’s soybean crop for the next two weeks.The weather forecaster is expecting temperatures to languish in the mid-to-upper 90s through central and northeastern areas of Brazil through the end of the month. Some rains are also in that forecast but they are relatively spotty. For those thinking about Brazil’s corn crop, this area also encompasses about 30% of the first-crop corn acres.

In the meantime, we continue to see more and more analysts downgrading their expectation of the 2018/19 Brazilian soybean harvest. Here’s a breakdown of some of the current estimates:

For perspective, in their December WASDE report, the USDA pegged Brazil’s soybean harvest at 122 MMT. While we won’t get updated USDA data until the US government shutdown ends, one can likely assume we’ll see the USDA start to match some of the local estimates in Brazil.

Even though, this would still be the second-largest soybean harvest in Brazil and the implications of 2019 U.S. soybean acreage are starting to swirl. Without a trade deal with China, more American growers might have to hold off until its game time in the spring to determine what their actual soybean acreage should be. Today, my guesstimate is that we see 2019 corn acres in the U.S. top 93 million will soybeans dip below at least 85 million, possibly 84 million acres.

Switching oilseeds, canola prices continue to lack a major demand headline to help drive new buying interest. Lately, the Canadian Loonie has been a fallback answer for as to why canola prices have fallen but that storyline has now been fully baked in. There is some buzz over colder weather impacting deliveries. However, based on the really strong attendance at the Western Canadian Crop Production Show I saw in Saskatoon, Sask. this past week, I’m pretty sure this rationale for stronger canola prices will fall flat on its face.

The big question mark for canola prices is the current export environment, most reservations being attributed to some weaker geopolitical relations between Canada and China. More specifically, the Chinese government has explicitly stated that they will retaliate against Canada if Huawei Technologies are banned from participating in Canada’s 5G networks (something other countries are already suggesting). 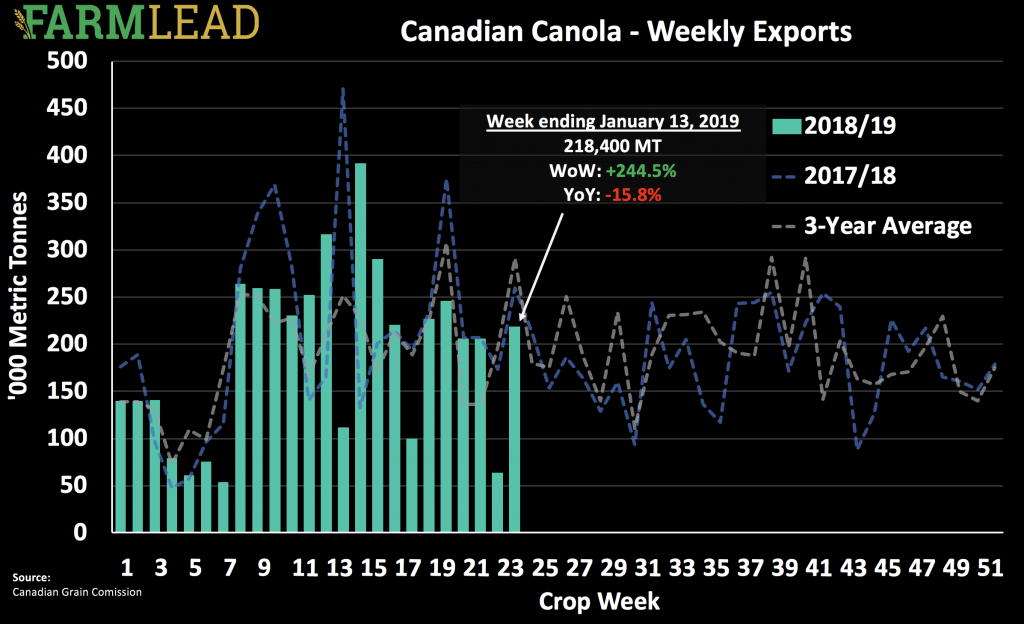 With the current environment for canola prices and some questionably long-term demand issues related to China (not just for raw canola seed but also canola oil and meal), 2019 acres are quickly becoming a pretty important topic. But so are rotations!

Clubroot disease issues are starting to emerge more frequently across the Canadian prairies. Thus, the immediate question I ask is whether or not Western Canadian farmers should fall back to the 20 million or so acres they were seeding before 2017’s 23 million and 2018’s 22.8 million acres?

Finally, coming into wheat, with some of the colder weather this week and next across North America, the usual headlines are making the rounds about whether or not a winter wheat crop will have enough snow cover to guard against the frigid temperatures. Usually, this helps support wheat prices for a few weeks before the story runs its course and some data defends the fact that the winter wheat crop will be just fine.

For barley prices in North America, values have started to pull back a bit lately. This has prompted our call-to-action for FarmLead users to post on the Marketplace for the nearly 150 credit-verified feed barley buyers we have to deal on. The goal would be to contract before the end of the month and get movement before early March, before road bans come on.

There’s still more U.S. corn and feed wheat making its way into the Canadian feed grain market, and that’s obviously weighing on feed barley prices. That being said, Canadian barley exports continue to rock and roll, now tracking 33% higher than this time a year ago. Thanks to last week’s strong shipments, 1.12 MMT of Canadian barley has now been shipped out through Week 24 of the 2018/19 crop year. 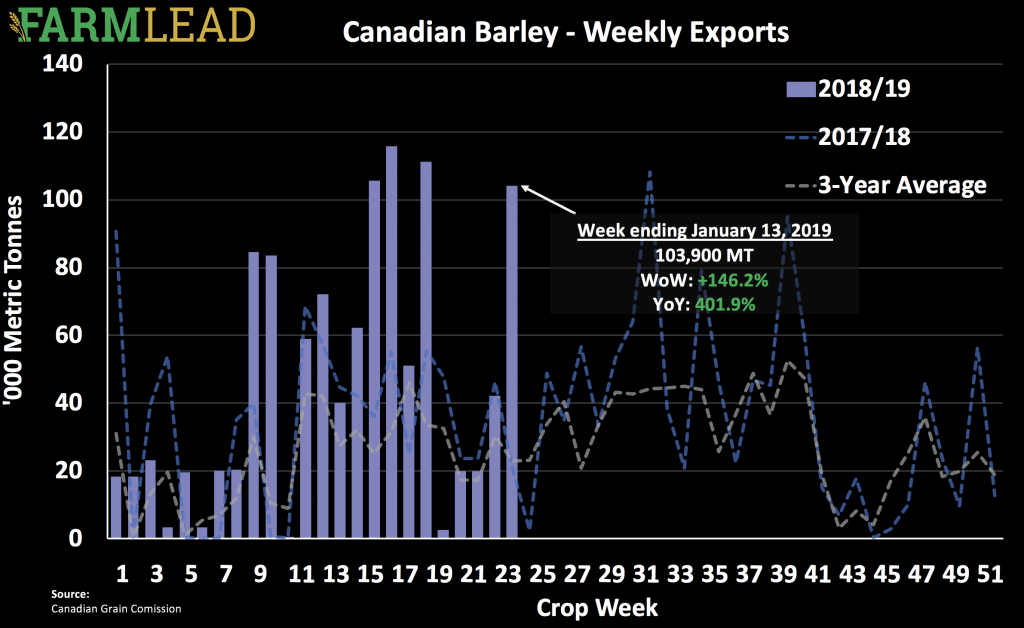 This gives rise to my theory that Agriculture Canada will have to revise its 2018/19 barley exports forecast higher from the current 2.45 MMT it has penciled. From where I’m standing today, I think we could see values match, if not top last year’s record shipments of 2.824 MMT. This, of course, helps domestic values, but as long as barley prices stay elevated, you’re also seeing more 2019 barley acres being bought by the market. As such, today, you should certainly be thinking about contracting new crop, as well as remaining old crop.