The Saskatchewan Government has mapped out where clubroot has been discovered in the province. To date, there have been 46 confirmed cases of the disease in commercial canola fields, up from 37 reported late in 2018. The pathogen was even confirmed in three fields that did not exhibit symptoms.

“Monitoring the spread of clubroot through surveys is valuable to everyone in the agriculture industry, as it helps the industry make informed decisions around clubroot management,” Agriculture Minister, David Marit says in a news release. “We consider awareness and education of clubroot to be priorities, as both will help prevent the spread of the disease in Saskatchewan.”

The findings on the map (see below) are from soil samples taken from the 2017 and 2018 surveys or were reported to the ministry by producers and agrologists outside of the survey. Roughly 1,500 fields were tested as part of the survey in 2018, while in 2017, 99 fields were tested. The landowners of all fields with visible clubroot symptoms or the presence of the clubroot pathogen have been contacted, along with the information and location being shared with the local Rural Municipality office.

In partnership with SaskCanola and the Saskatchewan Association of Rural Municipalities (SARM), the Saskatchewan Ministry of Agriculture increased its clubroot surveillance efforts last year as a result of two new findings in the province in 2017.

“SaskCanola invested in this survey to help farmers understand where the movement of the disease is within the province,” says Lisa Horn, executive director of SaskCanola.  “We continue to encourage growers to remain vigilant about minimizing soil movement and use this new map as a tool in their ongoing management and prevention of the disease.”

The disease is declared a pest under Saskatchewan’s Pest Control Act. Clubroot restricts a plant’s ability to obtain water and nutrients from the soil. According to the Ministry of Agriculture, the key to clubroot management is to keep the pathogen levels as low as possible to minimize the impact on canola yield. Management can include the use of clubroot-resistant canola varieties in a minimum of a three-year crop rotation.

A Pest Control Officer will be monitoring the infected fields in the years to follow. 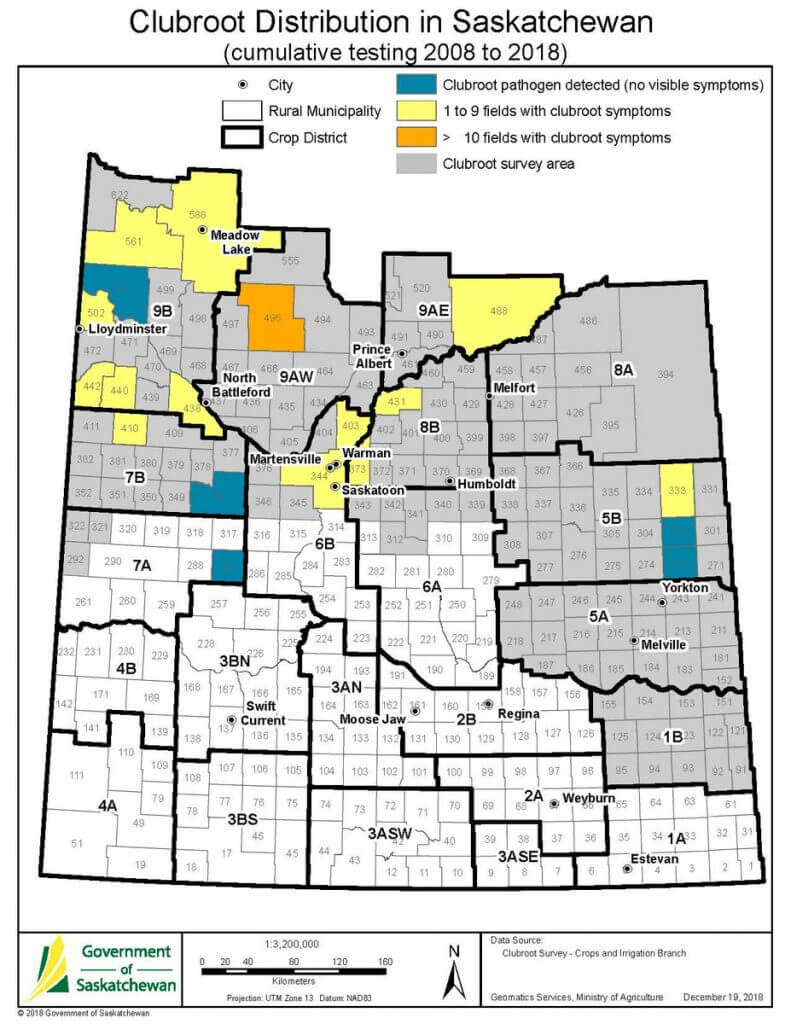 Dairy, egg, chicken producers to get compensation as 2019 budget unveiled