Grain markets finished their third week of trading in February — one shortened by a day because of national holidays in Canada and the U.S. — on a strong note, namely because of positive announcements from American-Chinese trade war talks. While the week started out rather weak, especially in the wheat complex, Friday’s announcement that China has agreed to buy $1.2 trillion in U.S. goods seemed to turn things around. This serves as a good omen before the trade war tariff truce is set to expire next Friday on March 1st. However, it’s rumoured the two sides still remain far apart on the subject of intellectual property.

While the recent news on Chinese potentially buying more U.S. goods, the trade war between China and the U.S. effectively halting the trade of soybeans between the two countries. Thus, it’s been estimated that the significantly-large supply of American soybeans could take three years to work through! Ironically, recent analysis by the University of Illinois suggests that, even at current soybean prices, it might not be that more profitably to switch more acres to corn in 2019 for farmers in the Midwest!

However, USDA announced at its annual AgForum that they do think soybean acres will about 5% from last year to 85 million acres getting planted this spring in the U.S. If realized, using trend-line yields of 49.5 bushels per acres, this would still be on the largest crops ever in the U.S. at 2.4 billion bushels. This would, however, be 8% below 2018 and would push 2019/20 U.S. soybean ending stocks down to 845 million bushels, a drop of 65 million bushels from the current crop year’s projected carryout.

On the flipside, the USDA suggested that American farmers will seed 92 million acres of corn, up about 3% over last year. With average yields of 176 bushels per acre, this adds up to a 14.9 billion-bushel crop. Thanks to some strong domestic use and exports in 2019/20 that the USDA sees in its crystal ball, American carryout should fall 5% year-over-year to 1.7 billion bushels.

There are some questions on whether the crop will get in on time though. This winter has been unusually snowy, and with some storms still on the horizon, the Midwest could see a very wet spring. Taking it a step further, the NOAA’s long-term forecast for the April-May-June period suggests above-normal rainfall, but also some above-average temperatures.

Not to be outdone, the International Grains Council came out this past week with some of their own forecast for the 2019/20 crop. In it, the IGC has suggested some bullish dynamics for canola prices, namely EU rapeseed acres falling to their lowest since the 2006/07 crop year. At the IGC’s estimate of about 14.4 million acres, this would be a 13% decline year-over-year.

However, an increase in Ukrainian acres is making up a lot of the reduction. We also know that Ukraine is exporting nearly 90% of their total rapeseed harvest to the EU. Comparably, Strategie Grains sees 2019/20 EU rapeseed acres at about 15 million acres with the top 4 producers – France, Germany, Poland, and the UK – all seeing smaller area planted with the oilseed this past fall.

Globally, the IGC is thinking that worldwide rapeseed / canola acres will be mostly unchanged at nearly 88.5 million. This is mainly attributed to increases in Canada, Australia, and, as mentioned, Black Sea countries. With the smaller acres in Europe though, it’s expected that the EU is going to have to import more canola both in 2018/19 and 2019/20. For the current crop year, Viterra is estimating that EU canola imports from Canada will jump by a third from their five-year average to 800,000 MT.

From the standpoint of canola prices, European rapeseed values on the Paris futures board have recently hit their lowest levels in the 2018/19 crop year. The decline in the EU market is attributed to strong vegetable oil competition (namely palm oil) and smaller biofuel demand.

Back here in North America, one could argue that canola prices are factoring in 2019/20 acres a little earlier than usual and, as such, also finding some marketing-year lows. This week specifically, paper canola prices on the May 2019 contract lost 0.35% on a stronger Canadian Loonie and consistent producer selling. That being said, just looking at the chart below of average spot canola prices of last year and the 3-year average in Western Canada, it’s seems much more logical to wait for some seasonal rallies come May/June timeframe if you’re thinking about selling something on the physical market. 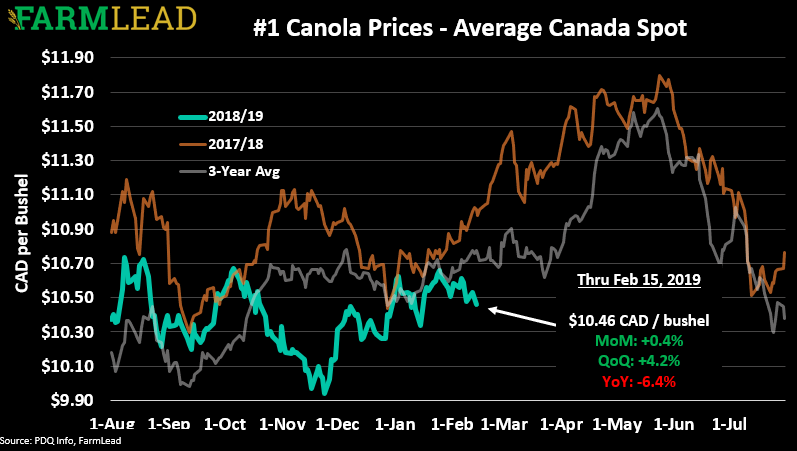 The IGC also suggested that global 2019/20 wheat production and ending stocks will be pretty similar to this past year. As such, we saw some weakness earlier in the week in the wheat complex, notably with Chicago SRW prices dropping nearly 3% for the week.

Combined with more corn acres though, you could look at the feed market supply structure becoming a little more saturated. This increased production intuitively immediately competes with the likes of feed barley prices, whose values have stayed surprisingly strong throughout the winter.

Supporting the strength was strong demand in Saudi Arabia and China, as well drought conditions in Australia, limiting the size of both the barley harvest, and thus barley exports. However, the market has started to normalize a bit, as demand from the two largest imports (Saudi Arabia and China) has tempered off, and the market is already starting to look at 2019/20 supplies.

Strategie Grains notes that feed barley prices in the EU and Argentina have been tracking Australian values and have fallen by about $20 USD / MT in the past. That in mind, with more substitution effects from corn and wheat to replace feed barley, Strategie Grains lowered their estimate of EU barley exports from 5.8 MMT last month to 5 MMT this month. They did, however, increase their estimate of the 2019/20 European barley harvest to 62 MMT, which would be an 11% jump from last year’s crop negatively impacted by drier weather in northern countries.

On the North American front, recent cold weather has increased some of the trade volumes but feed barley prices have remained steady. It’s been suggested, however, that more corn is going to feed rations in Lethbridge, which is certainly going to put some pressure on feed barley prices. Simply put, U.S. corn is cheap (hence the USDA’s increase in export potential for the 2019/20 crop year)! 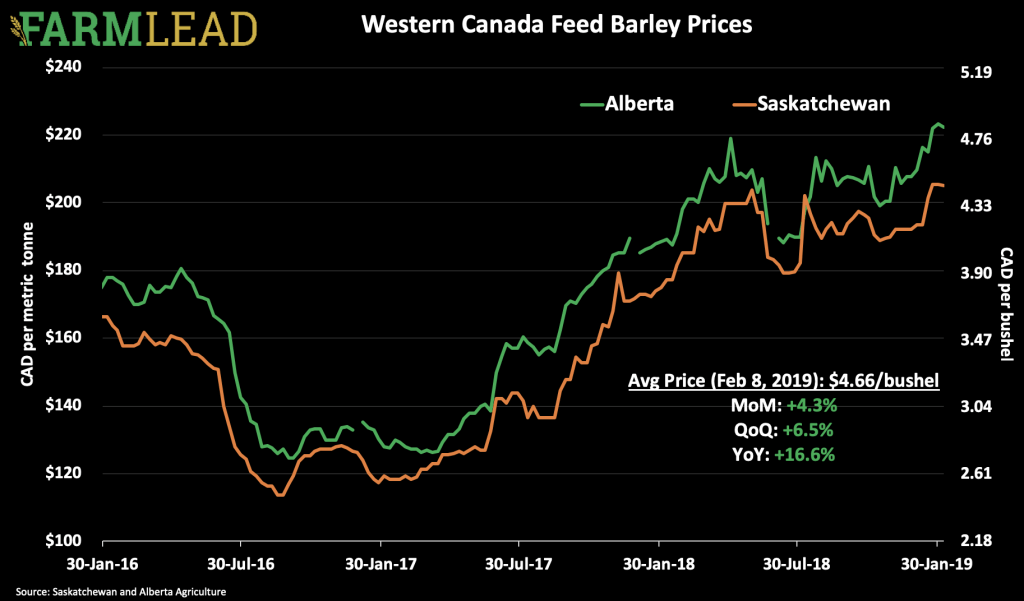 While strong activity of Canadian barley exports though continues to compete with the domestic market, current barley prices are still buying more acres for the 2019/20 crop year. This isn’t just true though in Canada, but also in the U.S., Australia, Russia, Ukraine, and, as mentioned, the European Union.

Overall, it’s starting to feel like a divergent trend in grain markets: feed grains are starting to see some more bearish headwinds, whereas oilseeds might have some breathing room to start a swing to the upside a bit earlier than usual. Mother Nature certainly will continue to have an impact things, but we certainly know that grain markets remain jumpy on the subject of U.S. and China trade.