Grain markets marched through the middle of February with most of the focus on three things: trade war negotiations between China and the U.S.; the potential for another U.S. government shutdown (and thus, no grain trade data again); and, continued digestion of the February WASDE report published by the USDA last week.

All things considered, the WASDE report was rather uneventful. Average U.S. corn yields were also felled, down by 2.5 bushels from the November 2018 WASDE report to 176.4 bu/ac. This helped push total production, and thus ending stocks lowered down to 1.735 billion bushels. U.S. soybean 2018/19 ending stocks falling to 910 million bushels on average yields lowered by 0.5 bushels per acre to 51.6 bushels per acre (bu/ac).

This wasn’t enough though to help soybean prices this week as Chinese import data showed the markets that the People’s Republic imported just 7.38 MMT of soybeans in January 2019. This was down 13% from January 2018’s 8.48 MMT, albeit it was 28% higher than December 2018’s imports of 5.72 MMT. Through the end of last month, China was holding about 6.19 MMT of soybeans, which is still well above levels seen in previous Januarys but below the record high of supply seen back in October.

On the other hand, soybeans also got some support from continued domestic crush volumes as National Oilseed Processors Association said that its members used 171.6 million bushels of soybeans in January 2019, 2 million bushels above the average analysts’ pre-report guesstimate. Nonetheless, soybean prices lost 0.75% for the week to close just under US$9.08/bu on the Chicago front-month March 2019 contract.

The other obvious factor affecting soybean prices is the trade war between the U.S. and China, which is, like it is for me, probably starting to sound like a broken record for you. The negotiations in China this past week is likely to continue to have some impact on soybean prices, but the big question being floated around right now is whether or not soybean prices are overpriced.

With the information that we have today, we know that U.S. soybean acres are going to fall considerably this spring, with my number being somewhere closer to 83.5 million acres today. Of course, this size of area could change if a trade war resolution is realized, but the market seems to be pricing in something around that 84 million-acre number.

The other major factor here for soybean prices is South America. Last Friday, the USDA dropped their estimate of the Brazilian soybean harvest by 5MMT to 117 MMT and the Argentine crop by 500,000 MT to 55 MMT. This is an indicator of some of the weather issues that these two major soybean production countries are facing right now.

Comparably, CONAB cut Brazil’s soybean harvest to 115.3 MMT last week, down 3.5 MMT from their January estimate. It’s been suggested that more cuts could be on the way and we’re starting to hear rumours of 113 and 114 MMT being more realistic in Brazil. Keep in mind, however, this would still be the second-largest soybean ever produced by Brazilian farmers.

Nevertheless, because of the smaller crop, soybean exports in the 2018/19 crop year for Brazil are expected to only come in at 71.5 MMT. This would be a drop of 12 MMT year-over-year but available inventories are significantly depleted and domestic soybean prices to keep beans in the country are likely to be more competitive with export markets. Remember, though, that Brazilian soybeans still don’t have a 25% import tax by China to deal with like American beans do.

You’d think Canadian canola would be able to take advantage of this gap as well, but there’s the ongoing political sparring between Ottawa and China over the whole Huawei incident. For canola prices, the outlook remains relatively neutral — it could be better if exports to China weren’t be stalled at the port because of the geopolitical issues. That being said, with the Canadian loonie gaining on Friday, canola prices dropped, losing 1.5% for the week to close at $476/MT. On a related note, cumulative shipments through Week 28 of the 2018 crop year are sitting at 5.44 MMT, down nearly 6% year-over-year. 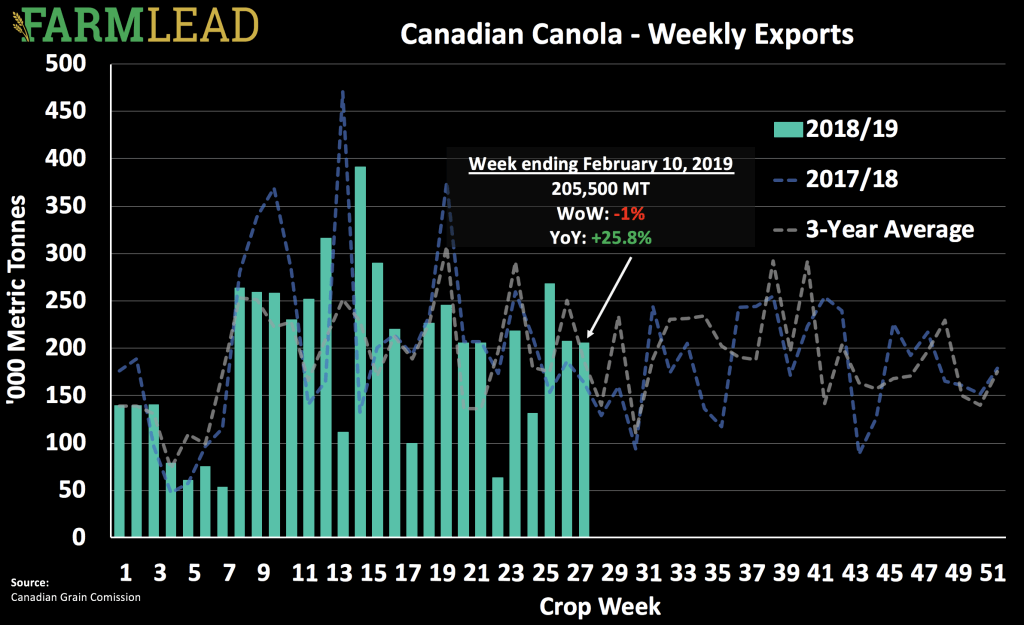 Conversely, non-durum wheat continues to show strength with 9.81 MMT now shipped out in the 2018/19 crop year. That’s nearly 17% higher than the same time a year ago. As we get closer to the second-half of the marketing season, it’s becoming clearer that a record year of Canadian wheat exports is certainly upon us. 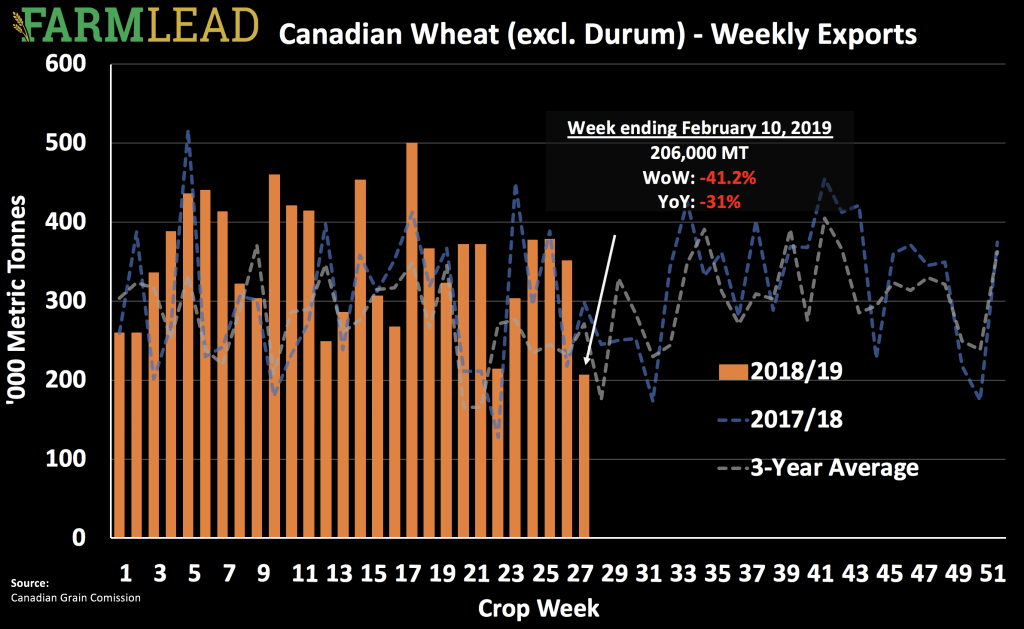 For perspective, the 8 major wheat-exporting countries – Argentina, Australia, Canada, the EU, the U.S., Russia, Ukraine, & Kazakhstan – held more than one-third of all inventories about 5 years ago before global wheat production started to pick up steam. This is a significant reduction and basically suggests that the major exporters of the world are getting a little tighter in terms of what they can ship out (AKA bullish).

This in mind, wheat prices on the March 2019 contract in Chicago lost 2.7% for the week, to fall to its lowest level in more than year as traders eyed weaker cash markets and some bearish technical signals. On the cash front, Algeria’s purchase this week of 600,000 MT of milling wheat was for about US$15/MT cheaper than what they bought for back in January!

Rounding things out, corn prices made their first weekly gain in a while, closing up 0.15% at just under $3.75 USD/bushel in Chicago. There certainly are some more headlines to end the week that support a potential ending to the U.S.-Chinese trade war, but the market is remaining cautious about falling in love with rumours seemingly put out by Cupid.

If you were farming on the western Canadian Prairies in 2019, you'll most likely shudder at the thought of flea beetles, knowing how rampant they ran throughout the spring. Syngenta recently rolled out a new flea beetle option for seed treatments in Western Canada, called Fortenza Advanced, that has the active ingredients sulfoxaflor and cyantraniliprole.…Read more »

The Week in Markets — We’re Talking Currency and Oil!