Grain markets marched into the month of February without much fanfare, as wheat prices were the only thing to make positive gains since last Friday. Unfortunately, for Canadian readers, some of these gains were offset in the cash market by the fact the Canadian loonie gained nearly a full point (1% or 100 basis points) to close at US$0.764. This was fueled a bit by some weakness in the U.S. dollar as a result of some disappointing negotiations between Beijing and Washington this past week to end the trade war.

There is one month left before the “tariff truce” between the U.S. and China expires. Unfortunately, U.S. Commerce Secretary Wilbur Ross recently was quoted saying the negotiations are miles apart. Complicating the negotiations is that the U.S. has formally applied to extradite Huawei CFO, Meng Wanzhou, from Canada as the American has accused her and her company of “circumventing sanctions on Iran and stealing trade secrets from T-Mobile.”

Coming back to grain markets, Oil World is suggesting that soybean prices might start to see some benefit from  crop damage in South America. The German analytical firm thinks that U.S. soybean exports should benefit and that volume expectations should be raised from 2Q2019 going forward. That being said, soybean prices lost 0.85% this past week, with the front-month March 2019 closing at US$9.175/bushel at Chicago.

Cash canola prices are looking for their own sense of direction as exports and domestic crush have been relatively mute, especially compared to last year. Market rumours suggested that there up to nine ships of Canadian rapeseed last week that were unloaded or waiting to be unloaded, but the Chinese government was prohibiting processors from crushing the seed. As such, this is providing support for additional soymeal buying, albeit the feedstuff did lose 0.6% this past week on the futures board.

Back in canola though, through Week 26 of the 2018/19 crop year, Canadian canola exports made it over the 5 MMT mark with 5.03 MMT now shipped out. That’s still 7.4% behind last year’s pace though. It is worth noting, however, that Agriculture Canada’s most recent crop estimates dropped 2018/19 canola exports by 500,000 MT to 11 MMT. Conversely, they estimate 2019/20 Canadian canola exports at 11.2 MMT! The big export number is rooted in another big crop of a forecasted 20.5 MMT harvest. 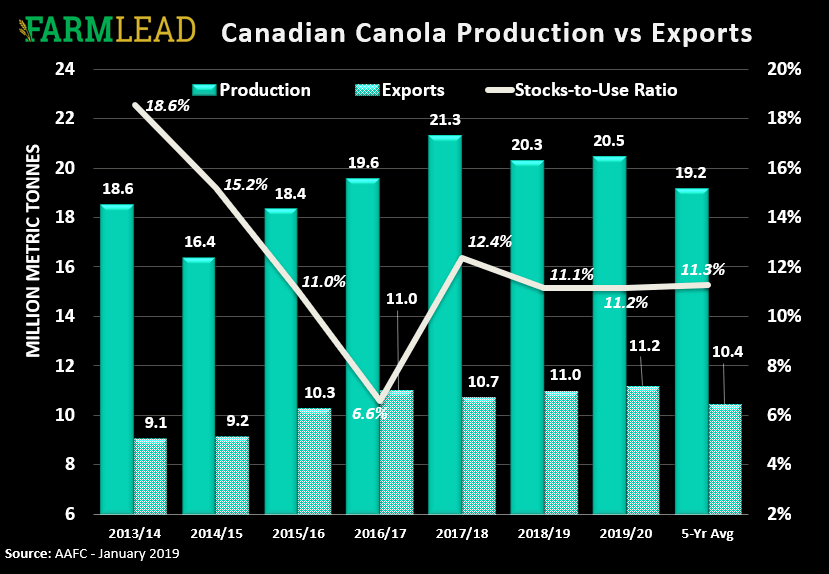 This comes from 23.1 million acres of canola getting seeded this spring, which would be a new record & nearly 7% above the five-year average.

Staying in oilseeds, flax prices are holding up today, but that might not be for long. Agriculture Canada is expecting farmers to plant 988,000 acres of the oilseed in 2018/19, a jump of 15% year-over-year. Based on some higher yields, production is expected to climb 25% year-over-year to 615,000 MT. 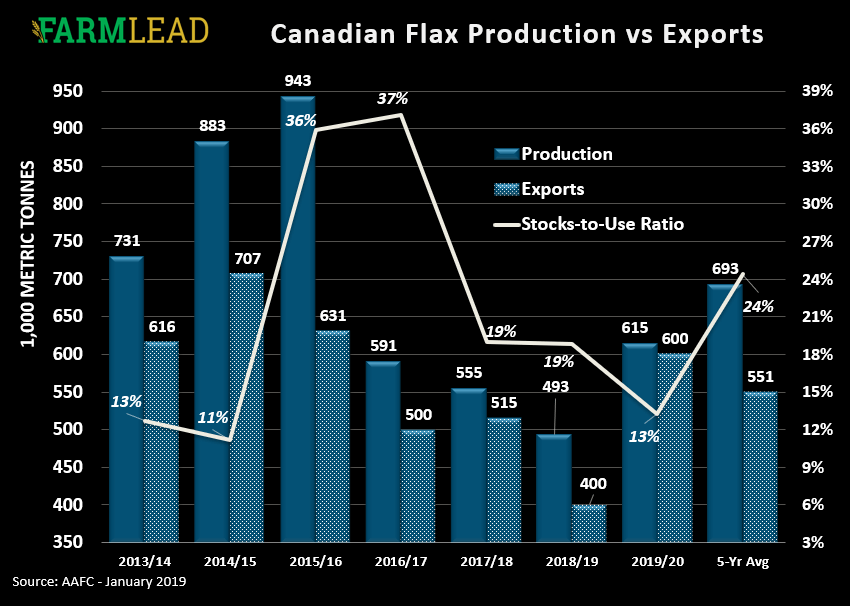 This aligns with the thinking from our outlook for the 2019 flax market, which mainly suggests that there is more downside risk in the market today for flax prices. I will admit though that I am a bit doubtful that we see 600,000 MT of flax exports since Russia and Kazakhstan have been consistently increasing their outbound shipments.

Switching over to wheat, the market has continued to be supported by some of the colder North American weather and the dwindling exportable supplies in the Black Sea. This a result of a certainly smaller 2018/19 wheat output in these countries, notably Russian wheat production down 15% and Ukraine’s wheat harvest down 7% year-over-year. Add in Australian production dropping 22% from 2017/18 and the EU wheat harvest decreasing 9% year-over-year, and there is some bullish buzz for wheat prices!

However, I’m questioning if that trend will last too long, especially since AAFC came out with a bearish forecast for the cereal in the 2019/20 crop year. In their forecasts, the government agency expects Canadian farmers to seed 20.4 million acres of non-durum wheat in 2019/20. This would be a 9% jump over 2018/19’s acreage and 11% above the 5-year average. From those acres, and average yields of a little more than 52 bushels per acre, the 2019/20 Canadian wheat harvest will top 28.1 MMT. This would be 8% higher than 2018/19 and 15% above the five-year average! 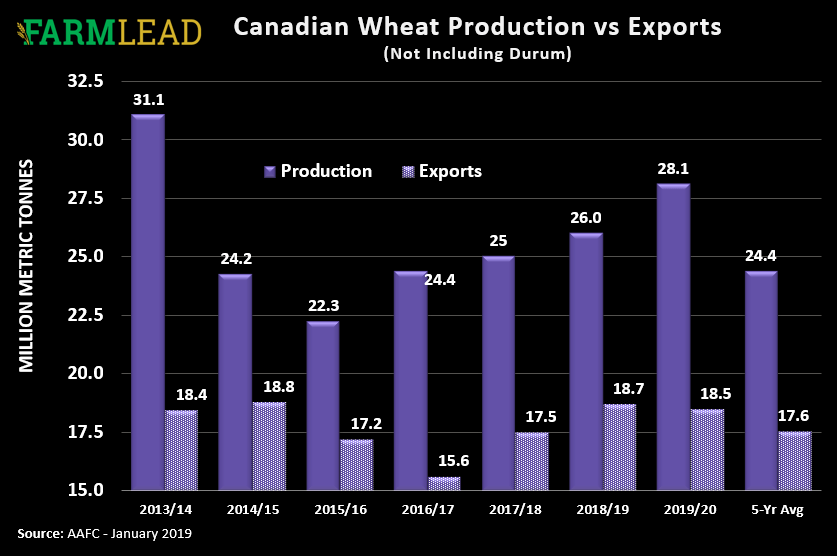 With the bigger crop, wheat ending stocks in the Great Wheat North will push from the 4.2 MMT they’re estimated to close 2018/19 at, up to 5.5 MMT for 2019/20 carryout. Ultimately, one of the conclusions that can easily be made is that today’s wheat prices likely won’t be available a year from now, especially when all the aforementioned countries who saw lower wheat production in 2018/19 are planting more wheat in 2019/20.

Coming back to the current crop year, AgCanada raised its estimate for 2018/19 Canadian wheat exports to 18.7 MMT, up 200,000 MT from their previous report and 7% above 2017/18’s shipments. This number is precariously close to a new record, something that I think is possible, considering that through Week 26, Canadian non-durum wheat exports are now sitting 17.5% higher than this time a year ago, with 9.25 MMT shipped out.

On that note, Russia’s Minister of Agriculture came out this week and suggested that the country’s wheat production in 2018/19 will come in around 67 MMT. This is a bit surprising though as it’s been suggested that Russian wheat acres planted this fall were up year-over-year. From a total production scenario, the total 2019/20 harvest of all grains is expected to hit 108 – 110 MMT. From this, the expectation that Russia will export 42 MMT of total grains, including 36 MMT of wheat.

The other factor in this situation is that Russia’s grain watchdog is starting to put more eyes on the industry. The “Rosselkhoznadzor” is reportedly looking to strengthen controls on wheat exports (and grains in general) in order to keep domestic grain prices down.

As I stated at the beginning of the 2019 calendar year, these sorts of nationalist/protectionist policies are playing head games with grain markets and traders for two reasons. The first, it’s a constant rumour mill of what is actually happening in Russia, and the second is now, it opens up the door of wheat exports from other countries. Simply put, which countries are poised to capitalize on the window of opportunity? American and Canadian wheat exporters are certainly watching things closely.