As we approach the ending of another winter, Mother Nature is not being kind. As some Ontario and Quebec farmers learned last week, wind-whipped snow loads can quickly become too much for even brand new construction. Reports of at least one dairy barn, a hog barn, and a drive shed collapsing in the last week has many farmers scrambling to remove snow loads — from new builds and old buildings alike.

In some situations, there’s not likely much a farmer could do to reduce the risk of collapse — heavy, wet snow that blows in suddenly and accumulates on one portion of the roof leaves little to no time for removal before it becomes too much. But for those worried about the risk, there are some preventative measures that could help under more average conditions.

Steve Beadle, engineer with Ontario Ministry of Agriculture, Food and Rural Affairs, says that preventative maintenance can reduce the risk of a roof collapse. Roofs are a system of support, and any weakening or broken aspects of the system compromise the integrity of the entire structure.

Any building that houses livestock is at higher risk of break-down. The higher humidity and ammonia in the air can cause corrosion of truss plates, and potential disintegration of wood bracing or trusses as well. Proper ventilation is key to prevention, Beadle says, as is regular checks to ensure the roof structure is intact.

At a minimum, and regardless of what is housed or kept in a building, an annual once-over of all roof structures to look for broken or missing bracing, weakened areas, or corroded plates is likely sufficient to flag any potential issues that will need repaired. 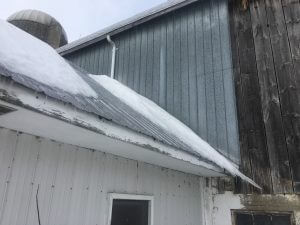 New builds must be built to current codes, however one area that can be overlooked when it comes to snow load risk is barn additions. Additions often chance wind direction and cause snow accumulation where it was perhaps not originally planned for (on the main structure). Beadle says a careful look at any additions is required, especially after a big storm. For anyone planning to build on to a barn, Beadle says it’s just as important to have a professional evaluate the plans, as the change in snow load pattern could require reinforcement of roof structures.

And what should you do after a big storm when snow loads look too heavy? The bottom line, Beadle says, is farmer safety. Farmers need to stay off the roof — as tempting as it may be to climb on to remove snow. Beadle says there’s simply too high a risk — use ladders and telescoping snow removal devices to keep you and your loved ones safe.