For anyone that’s ever done an agriculture diploma or degree, there’s likely a course that elicited groans when you’d see it on the schedule. For some it’s likely communications, for others maybe statistics, but for many it’s soil science.

That was the case for Marla Riekman, which is ironic, given that she now serves as Manitoba’s soil management specialist and has become an enthusiastic champion of soil health and soil knowledge extension.

The fact that soil health and management is getting the attention and respect it currently enjoys is no accident, and it’s been a long time coming. As Riekman shares in this episode of Agronomy Geeks, soil is no longer thought of as just some dead matter crops grow from — it’s understood that soil is alive and has its own critters and life cycles just like we see in any above-ground ecosystem.

Sharing knowledge about flora and fauna we can’t see is a major challenge for soil scientists and that has spurred creativity in those who work in the area of agriculture extension. Whether it’s soil pits four-feet down, buried underwear eaten by microbes, or corn seed dragged across tillage plots (Thanks, Anne Verhallen, OMAFRA, for the idea), soil knowledge transfer doesn’t have to be a dreaded chemistry lesson. As Riekman shares, you can have fun and learn and be fascinated by what lies beneath.

Hear the entire episode, below:

How far does your favourite implement move soil? 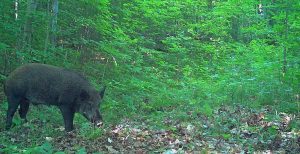 The continued growth of wild pig populations in Western Canada has Ontario regulators working to identify the extent of the problem in the province, and root out the invasive animals before populations establish. Wild pigs are defined as pigs that are not contained and can be found outside fences, says Bree Walpole, a senior policy…Read more »

Under the Microscope — What’s Downgrading Wheat?

Pump up Organic Matter — Feed Your Soil Like a Cow

Next Phase of Neonic Regs Too Restrictive on Farmers & Ag Professionals: Thompson