Grain markets were able to climb off the lows this week as some bullish factors have started to come into play, as well as some technical relief. To start off, after the largest funds’ net short position since January 2018 helped test new contract lows last week, corn prices have picked up their socks a bit. 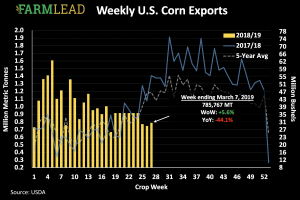 Announcements from the USDA for corn and soybean export sales were within expectations, but wheat faltered a bit. Through Week 27 of the 2018/19 crop year, actual exports of U.S. soybeans and corn are tracking 31% behind and 34% ahead of last year respectively. 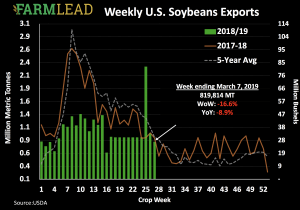 Thus, while some strong export sales have helped corn and soybeans regain some footing, doesn’t seem like any one wants to jump on the train to ride prices really higher. Put another way, those in a short position aren’t looking to cover their bets and help push the market higher until there’s something more definitively bullish for prices.

What’s not bullish is the buzz in Ukraine that the major corporate farms there are looking to hold off on selling anymore into the export market. So far this year, Ukraine has had some strong corn export volumes but with a mild winter and early spring, corn held in grain bags are starting to get emptied/sold. That increase in supply coming to market has pushed down domestic corn prices to less-than-ideal-sellable levels. Expectations though are that, after a big harvest last year, Ukraine’s corn farmers could produce another bumper crop.

Switching continents, Rosario Grains Exchange in Argentina revised their estimate of the country’s soybean harvest to 54 MMT, up 2 MMT from the previous estimate. Comparably, Buenos Aires Grains Exchange is still at 53 MMT. Rosario also increased their forecast for the corn harvest by 800,000 MT to 47.3 MMT. The increase is likely a result of the positive growing conditions, namely weather, that Argentina is experiencing right now.

Coming back to North America, one of the bullish factors that I’m watching is some of this intense, late winter weather and the potential impact on the start of Plant 2019. This winter has surely been one of the more extreme ones for most of the American Midwest as the region continues to get regular dumps of precipitation. When all added up though, for a lot of North Dakota, Wisconsin, Iowa, and Illinois, this winter has been one of the wettest (read: combination of rain and snow) in nearly 130 years.

This includes this past week’s major storm that caused white-outs in the north and flooding through the cornbelt. The subsequent question is whether these acres will get dried up in time for optimal seeding dates for Plant 2019.

Conversely, on the trade war front, U.S President Donald Trump says that “probably one way or the other, we’re going to know over the next three or four weeks” if a deal will get done with China. Whether or not that happens can have a pretty significant impact on what final acres will be for Plant 2019.

If you do see a deal made before Plant 2019 starts in the U.S. Northern Plains, it’s very possible that all those once-lost soybean acres that were supposed to get planted into wheat, may go back to getting seeded with the oilseed. For some American farmers though, they see soybeans still as the more profitable crop and will plant it with or without a deal to end the trade war.

Put another way, there’s not a big soybean market in places like North Dakota and Minnesota if there’s no demand out of the West Coast. If that returns, so does the likelihood of 2019 soybean acres in these fringe states being closer to what was planted in 2018. In turn, that means less wheat. Thus, if you’re a soybean, wheat, or even canola grower for that matter, you’re hoping some sort of geopolitical risk comes off the table before the drills start rolling in the next 5-8 weeks for Plant 2019.

Specifically, on canola, the USDA is expecting more acres to be seeded in Canada with the oilseed for Plant 2019. However, given the situation with China banning Richardson’s canola shipments, the political uncertainly could easily bend the ear of many Canadian Prairie farmers to seed less canola not more.  Through Week 32 of the 2018/19 crop year, Canada has shipped out 5.9 MMT, or about 8.5% less than this time a year ago. With about 20-25% of Canadian canola production headed to China, but currently dealing with political snafus, it might be a good time to review a diversification strategy for canola exports.

Chicago SRW wheat prices were able to rebound, mainly thanks to a big performance on Wednesday that saw the cereal grain nearly 30 cents. For the week, it did close about 20 cents higher, with the May 2019 contract finishing at $4.62. Kansas City hard red winter wheat prices only gained about half of their “softer” sister, with its May contract closing at $4.43. Finally, Minneapolis HRS wheat was the weakest performing of the 3 wheat markets, up only about 6 cents; the May closed at $5.55 while the December 2019 new crop contract closed above $5.77. 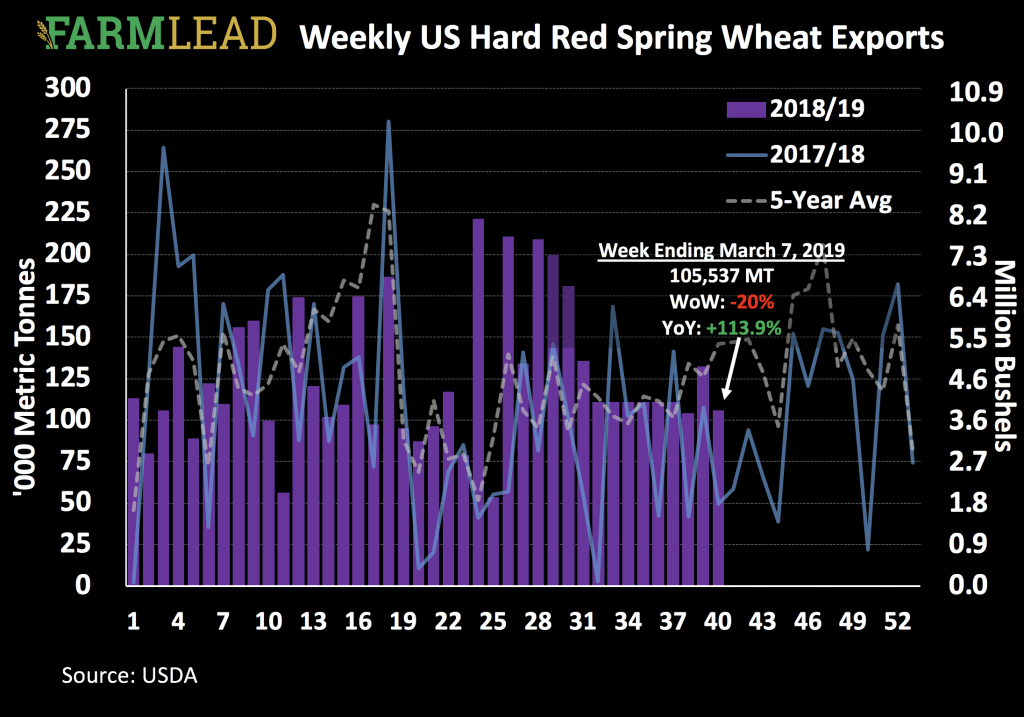 Overall, as we pass through to the second half of March, it’s great to see grain markets make some positive gains. However, there’s a lot of factors in play that will add to the volatility going forward. This includes, but isn’t limited to, the U.S.-China trade war talks, weather and melting conditions ahead of Plant 2019, and the upcoming acreage estimates, out on March 31st. Put another way, what we’re expecting today might be a much different realization by the end of April should Mother Nature and/or political agents continue to amplify their impact on grain markets.

What Will It Take to Bring a Soybean Crusher to Western Canada?

Navigating murky waters – this week in the grain markets