Grain markets this week were mostly lower on a technical sell-off and a lack of bullish headlines to push things higher. After starting the week out in the green, the complex flipped the calendar into March on some fresh multi-month lows. Digging in corn prices, were the best performer, only losing about 10 cents in Chicago with the front-month May contract closing at US$3.73/bu. Soybeans were next line this past week in terms of performance, closing at US$9.115/bu, which was down nearly 15 cents for the week.

Canola prices are diverging from soybean prices, as the latter continues to be fairly resilient (all things considered), whereas the former is making new contract lows. More specifically, canola prices hit new contract lows literally every day this week, with the May contract losing almost $8/MT on Friday alone to close at $461.30. Put simply, with canola losing about $20 in one week, it’s clear that end-users are well-supplied and canola exports are inching along behind last year’s pace: 5.65 MMT of Canadian canola has been shipped out through week 30 of the 2018/19 crop year. That’s 7% below the same pace last year. 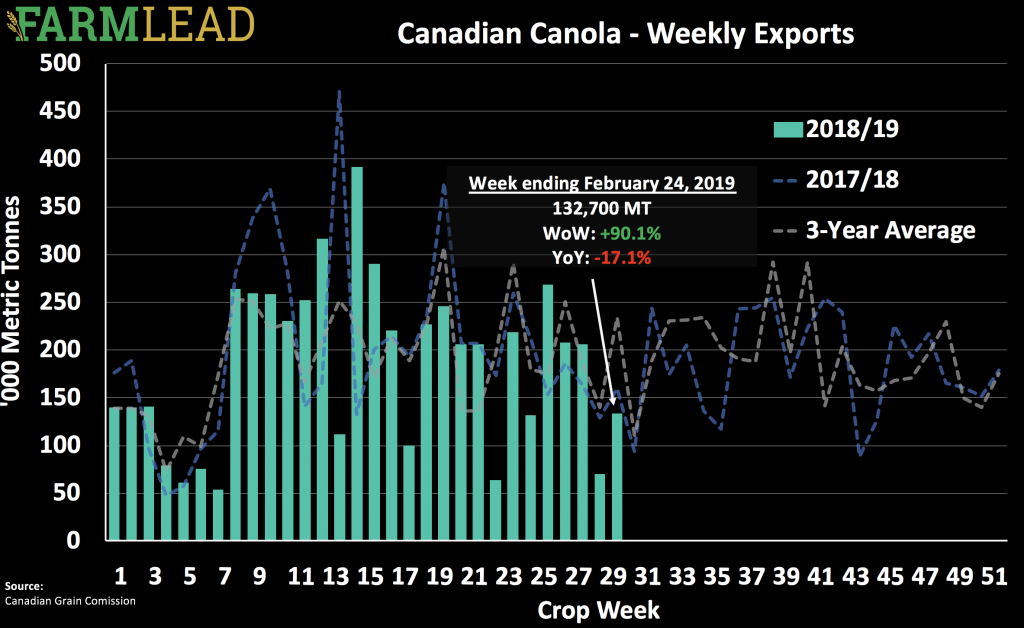 It makes one question how, if at all, Canadian canola exports are going to top 10.8 MMT this year, which would be a 4% increase from 2017/18’s volumes. My bet though is this slow activity is exactly why Agriculture Canada recently downgraded their forecast of total 2018/19 crop year canola exports, a drop of 200,000 MT from their January estimate. 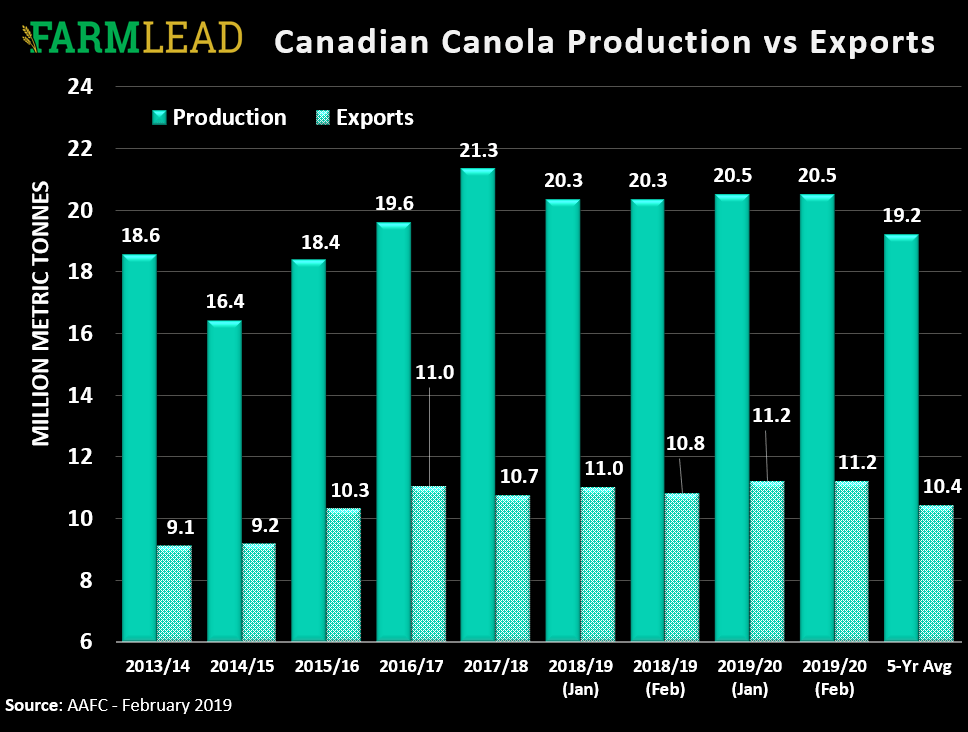 We all know that U.S. soybean exports have been abysmal without China buying much. Amidst all the data coming out from the USDA last week, China had said they were committed to buy 10 MMT of American soybeans. That’s why we saw a marketing year high of 2.27 MMT of U.S. soybeans shipped out last week. That puts total U.S. soybean exports at 25.5 MMT, which is still technically down more than 32% from the same time a year ago. 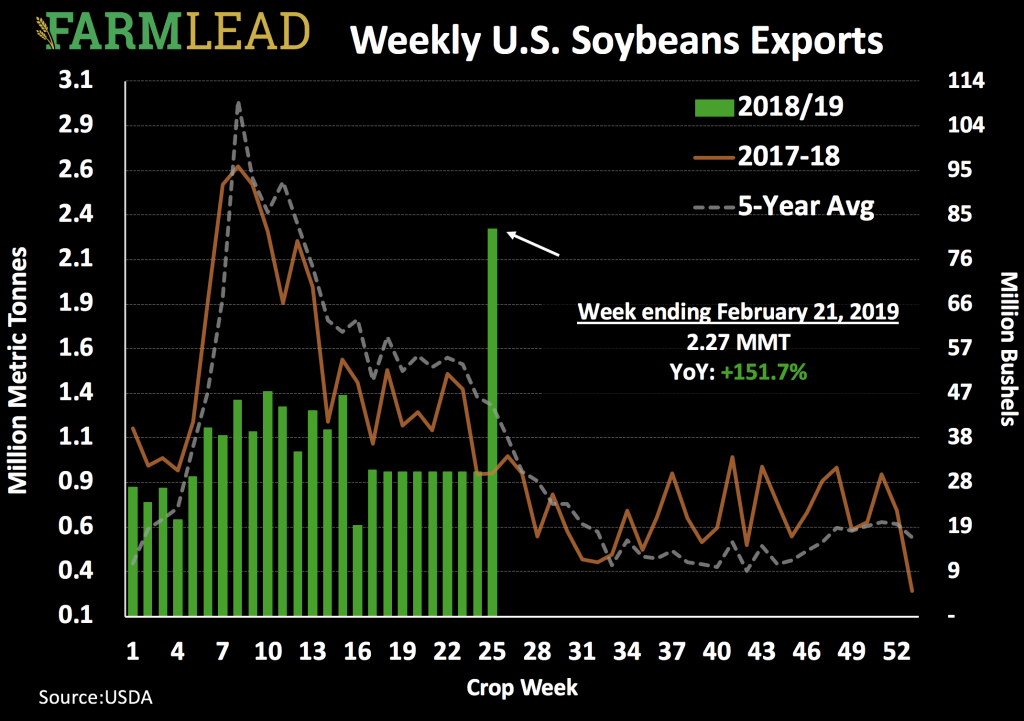 Could there be more in next Thursday’s report from the USDA? Potentially, but we also know that the China-U.S. trade war negotiations are ongoing. U.S. Trade Representative Robert Lighthizer says that there’s still much to be done to get a trade deal with China done.

If we come back to the fundamentals though, demand for feedstuffs in China is lower this year. Most recently, state agency CNGOIC said that they’re expecting soymeal demand to fall 5% year-over-year to 66.8 MMT as a result of a smaller pig herd size. It’s been estimated by analysts that China’s 400 – 600 million-head pig market could fall anywhere between 15% and 30% as African swine fever outbreaks have made it not only difficult to breed safely but also created higher hesitation from farmers to do so.  On that note, China is looking to overhaul the country’s hog industry with different regulations and zoning as an attempt to stop the spread of disease.

While China is certainly grabbing a lot of headlines, there have been more talk about weather and the start of Plant 2019, namely it being delayed in many areas. This year’s snowfall across major growing areas throughout North America is creating some concern that we’ll see significant run-off, namely in the Red River Valley. Intuitively, this sort of wet weather would negatively impact things through Southern Manitoba and North Dakota.

Flipping gears though, the Weather Network is expecting that start of spring (and that melting of snow) will start a bit earlier than usual this year, especially in Western Canada, with warmer temperatures coming around by the middle of March.

Before you break out your favourite cut-off jean shorts and t-shirt though, the NOAA is forecasting that the next two weeks are going to stay pretty chilly, particularly in the western half of the continent. Put simply, more cold weather is on the horizon for Western Canada, the Northern Plains, and the Western Cornbelt.

Switching continents, Radian Solutions is expecting that the dry weather in eastern areas of Australia will likely persist into the 2019/20 crop year. This means that yields for crops like wheat and barley will continue to suffer. Currently, Australia is in its summer months and it continues to be very hot: the past December and January were the hottest ever for those respective months in Australia. Further, February will be in the top 5 warmest ever and rainfall throughout the summer across the Land Down Undaa will total 30% below average. This would make it the driest season in over 35 years!

In last week’s column, I was feeling divergent about the grain markets, and a bit bearish in barley and wheat prices. However, should the dryness carry over into Australia’s growing season, this is easily the single-most important bullish factor to watch for wheat and barley prices.

On the latter though, the only thing that’s potentially more bullish for world barley prices is that China is about to impose a weird sort of “deposit” on Australian barley of at least 50% within the next week. Technically, this isn’t an import tariff but it sure as heck acts like one, as I doubt many Australian barley exporters don’t want to pony up an additional 50% of a shipment to put in escrow with the China.

Keep in mind that many of these exporters – the likes of Glencore, Cargill and GrainCorp, can easily start exporting more barley from their other countries, including Canada. Through Week 30, Canadian barley exports are tracking 32% higher year-over-year at 1.41 MMT. 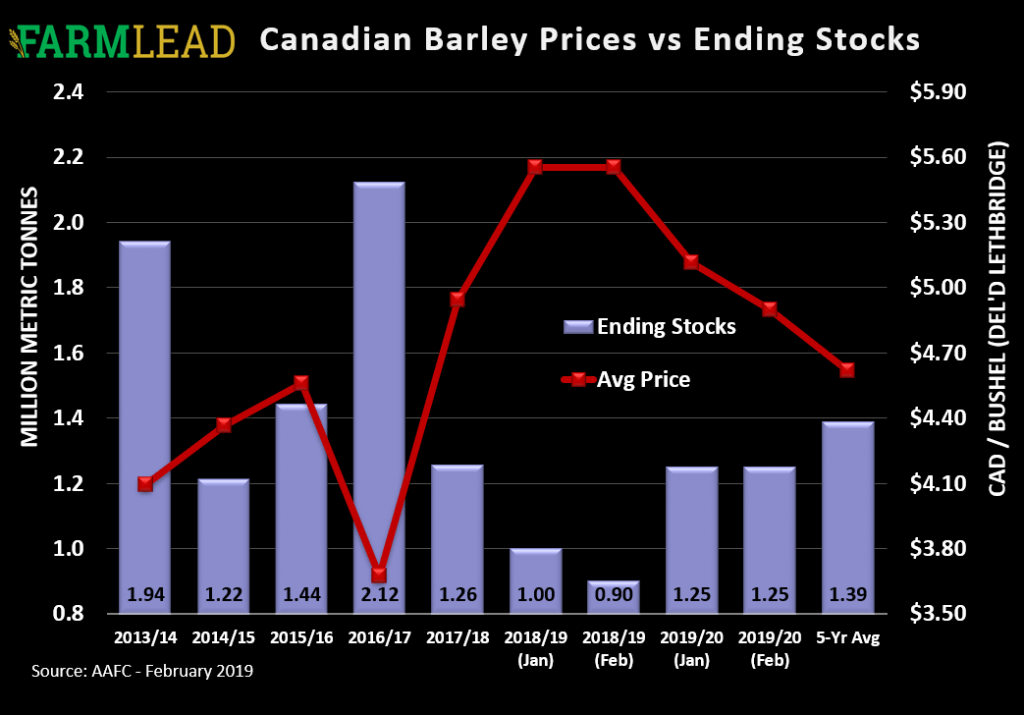 In a contrast to canola, Agriculture Canada raised its estimate of this year’s barley exports by 250,000 MT to 2.7 MMT. My thinking that, at this point, 3 MMT is potentially more doable. This explicitly translates to a tighter balance sheet, with Canadian ending stocks falling to a record low of 900,000 MT.

The Markets This Week — The End of the Easy-To-Move Grain, Export Estimates & Quality Spreads