The Ontario Fruit and Vegetable Growers’ Association (OFVGA) held its 160th annual general meeting last month and with it came the election of its new chair and vice chair.

Bill George Jr., a grape grower in the Niagara region, will take over the position from Jan VanderHout, a greenhouse grower who has served as chair for the past two years.

“I’m looking forward to working with the board and staff at OFVGA — we have expertise in every area around that table and on our team, and it is part of my role to help bring that expertise forward to influence policy on behalf of growers,” George says in a news release. 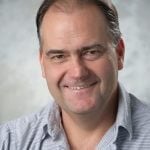 George, along with his wife Lesliann, grow 160 acres of wine grapes, along with harvesting and processing ice wine juice on a farm that has been in the family since 1796. Back in 2001, he was honoured by the University of Guelph where he attended to study horticulture with the title of Grape King, a title that is bestowed annually based on vineyard management and knowledge of the industry.

Twenty-four years ago, he became the director of the Grape Growers of Ontario and eventually became vice chair before serving as chair for nine years. Most recently, George became a director on the OFVGA board in 2015, and was elected as vice chair in 2017. He also currently represents Ontario on the Canadian Horticultural Council. 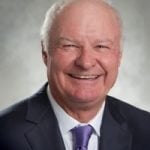 Apple grower Charles Stevens is the new OFVGA vice chair. He owns and operates an 83-acre apple orchard with his wife Judi and daughter Courtney. Wilmot Orchards is located near Newcastle and also features 21 acres of pick your own blueberries. In 1999, Charles was the recipient of the Golden Apple Award, which is given annually to a grower who has made outstanding contributions to the Ontario apple industry.

Currently, Stevens remains as the chair of the Ontario Apple Growers, where he has served as a director since 2006.

6.7 million birds on Canadian farms lost to avian influenza in 2022