This just in: there’s lots of grain still out there.

But you already knew this.

With the last year of a trade war with China and another big harvest in 2018, the USDA reminded us on Friday, March 29th, that there’s still a lot of grain left out there.

Corn was hit the hardest, as the USDA reported that there was still 8.605 billion bushels out there as of March 1st. While that’s down about 3% from the same time a year ago, the market was expecting to see something closer to 8.335 billion bushels. As such, front-month May contracts lost US$0.175/bu alone on Friday, while new crop December 2019 futures fell 13.5 cents. For the former, this was the biggest one-day drop in corn prices in percentage terms since July 2016! For the week, these two contracts lost nearly 22¢ and more than 15¢, respectively.

Wheat and soybeans mostly followed corn prices lower on Friday, but wheat also had some trouble on Friday, as its inventory level as of March 1st was pegged at 1.591 billion bushels. This would be the second-largest volume in the last 30 years and about 30 million bushels above what the market was expecting to see. Further, total wheat acreage came out at 47.33 million, which is a little above the pre-report average guesstimate of 46.92 million acres. Despite winter wheat acreage expecting to be the smallest its been in 110 years, new crop Chicago and Kansas City wheat prices dropped nearly 11% and more than 14% respectively for the quarter.

For soybeans, inventories as of March 1st were pegged at 2.716 billion bushels. This would be a new record for the reporting period, 29% higher than last year’s volume, and 36 million bushels above the market’s pre-report expectation of 2.68 billion bushels. From an acreage standpoint, the USDA suggested that American farmers will seed 84.617 million acres of soybeans, which is about 1.55 million or 2% below what the market was expecting to see.

Heading across the 49th Parallel, there continues to be a lot of eyes and ears watching canola prices as the tension between China and Canada grows. We know today, however, that the restrictions that China is placing on Canadian canola exports are definitively political. After Viterra’s license for canola exports to China was suspended earlier in the week, China’s Foreign Ministry spokesperson called the action “scientific” and “reasonable” but then added that Canada should “take practical measures to correct the mistakes it made earlier.”

Moving away from speculation and towards the facts, Canadian canola exports help up well last week, with nearly 200,000 MT shipped out. Through Week 34, total canola exports for the 2018/19 crop year are sitting at 6.23 MMT, or 8.4% below last year’s pace at this time. 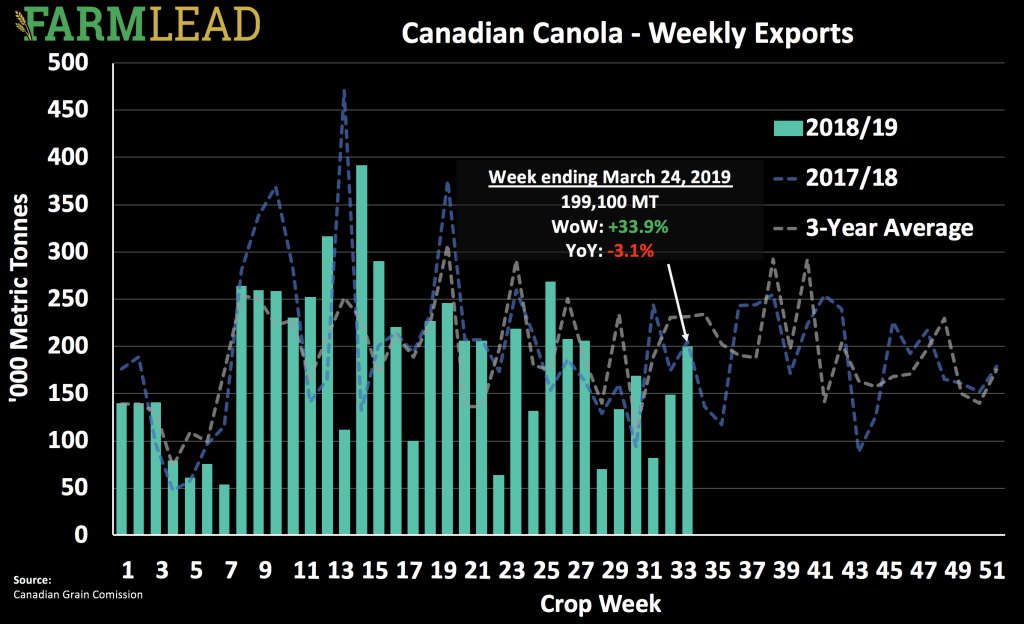 Despite the bearishness of Friday’s USDA report, canola prices were actually the only crop that was able to squeak out some gains last week. Worth mentioning is that U.S. soybean exports the last few weeks are tracking closer to their 3-year average. That being said, through their Week 29, total shipments have totalled 29.24 MMT (or a little more than 1.074 billion bushels if converting metric tonnes into bushels). 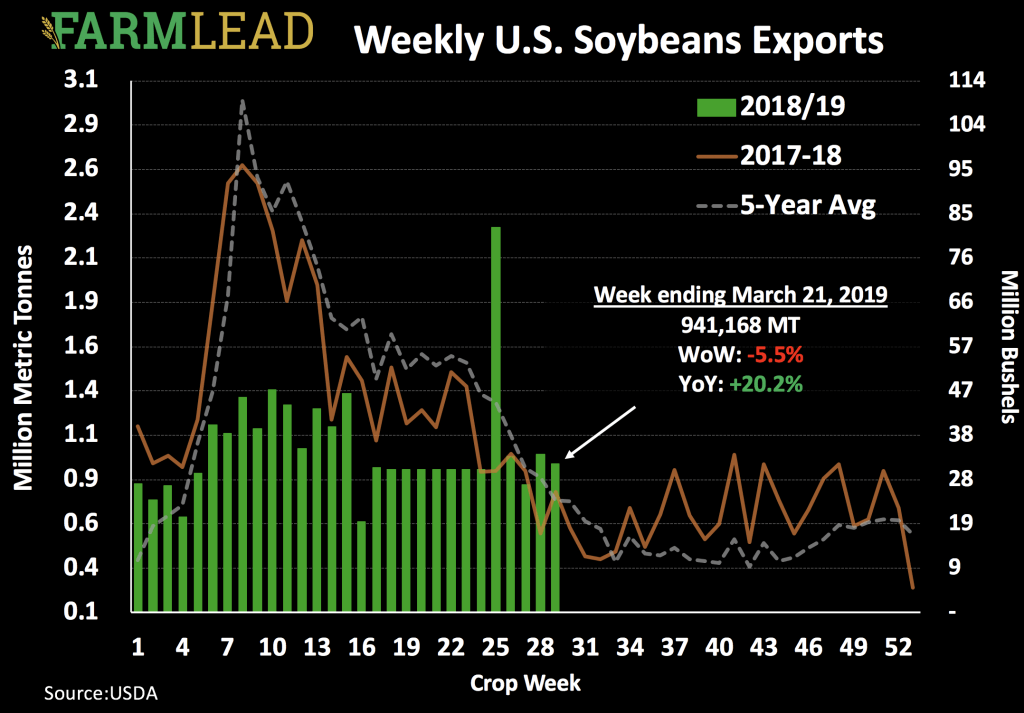 On that note, more trade war talks between China and the U.S. took place in Beijing this past week. It’s been reported that the Chinese have made some significant compromises on the current forced technology transfer that businesses must comply with to do business in the People’s Republic. The talks this week in Beijing will be followed by another round of face-to-face discussions in Washington this coming week. Ultimately though, there are still differences on the intellectual property issues, as well as how to enforce any trade deal.

Overall, the market was certainly surprised by the large stocks and corn’s big acreage number, and that’s why you saw such a knee-jerk reaction to the USDA’s report. With these reports out of the way though, the focus of the market will shift more to what’s happening, and not what’s theoretical. We can probably agree that corn and soybean acres will change by at least a million acres, maybe even two, from today’s release since the findings were completed nearly a month ago, and a lot has happened in the last month, namely Mother Nature. There’ll be a lot of springtime fieldwork required across the currently flooded Midwest and what is sure to be a wet, and also parts of the Northern Plains that the NOAA says is likely to flood. The Western Cornbelt is supposed to get more rain next week, making matters work.

Simply put, there’s a lot of question marks that grain markets will associate with this March’s acreage and stocks report. While weather is the biggest factor, the trade war talks between the U.S. and China is certainly another, and thus, Plant 2019 is being questioned from many angles. Ultimately, the main question that grain markets will likely be asking after today’s acreage and stocks report is what will 2019’s prevented planted acres total?

Prevent plant numbers in the U.S. have been steadily dropping over the last 4 years, from 6.7 million acres in 2015, to 3.4 million in 2016, to 2.6 million in 2017, and then only 1.9 million acres last year. Most analysts are looking for a prevented Plant 2019 area of somewhere between 3 and 4 million acres. Accordingly, that corn acreage number could easily come down in the next few weeks and the markets will slowly but surely recognize that.

The expected pull-back begins — This week in the grain markets