Grain markets were served up a monthly WASDE report on Friday, March 8th, but the numbers didn’t bring any new bullish feelings to the table. Most of the numbers that the USDA produced were either pretty close to their February WASDE number, or the pre-report estimate (which, as you can tell for yourself below, were not too far from last month’s WASDE number either! 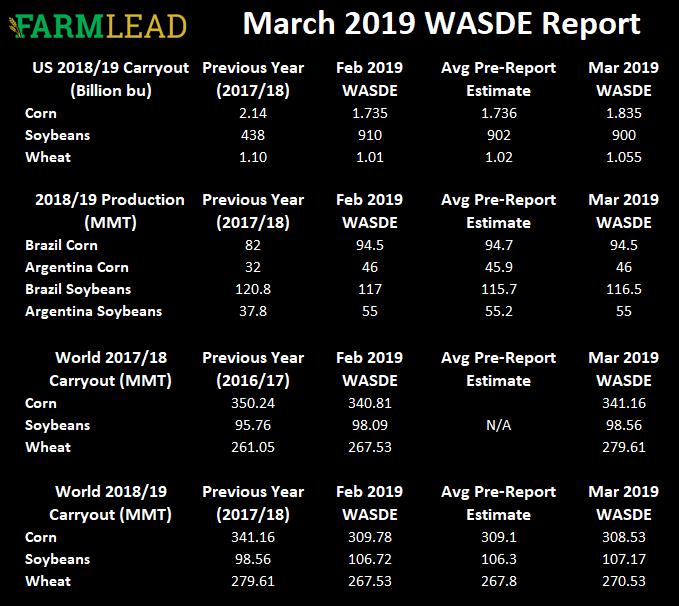 For me, the market that saw the most surprising change to its numbers was in corn. U.S. 2018/19 ending stocks were raised 100 million bushels thanks to exports being reduced by 75 million bushels and ethanol demand by 25 million bushels. The reduction in exports is especially surprising considering that, through Week 26 of the 2018/19 crop year, U.S. corn exports are tracking nearly 40 per cent higher year-over-year with 1.035 billion bushels. 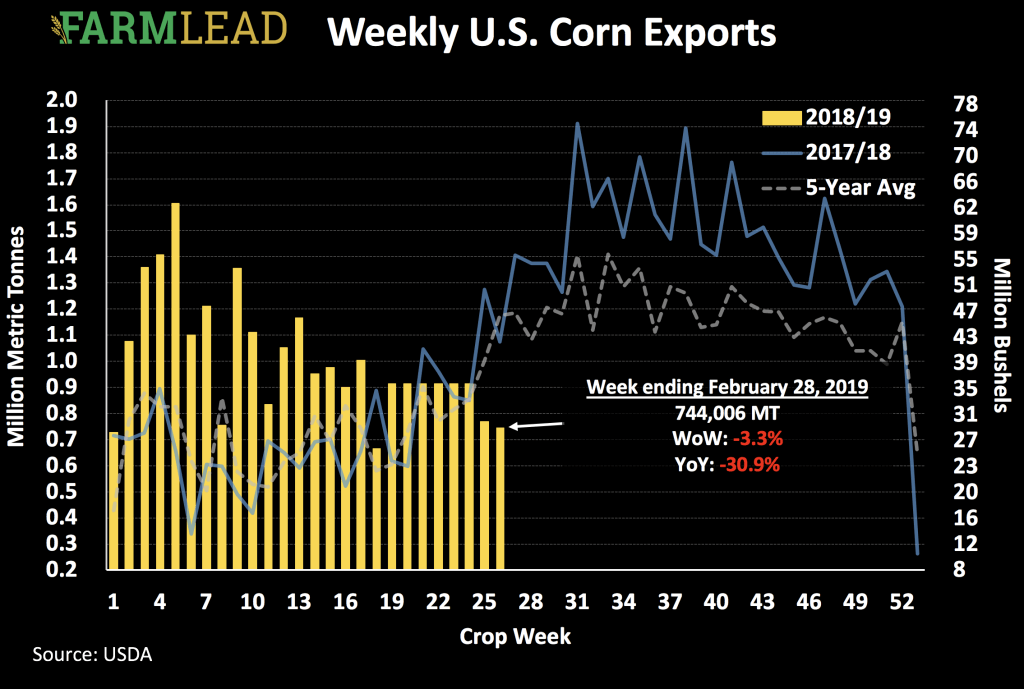 The USDA’s newest exports estimate for U.S. corn is for numbers to actually drop 2.6 per cent to 2.375 billion bushels. A bit confusing, no?  This sort of bearish expectation from the USDA in mind, 2018/19 old crop corn prices on the futures board in Chicago lost 7-8¢ USD/bushel for the week, with the May 2019 contract closing at $3.643. The new crop December 2019 contract is now firmly below the psychologically-significant $4, closing this week down almost 6¢ to $3.885. 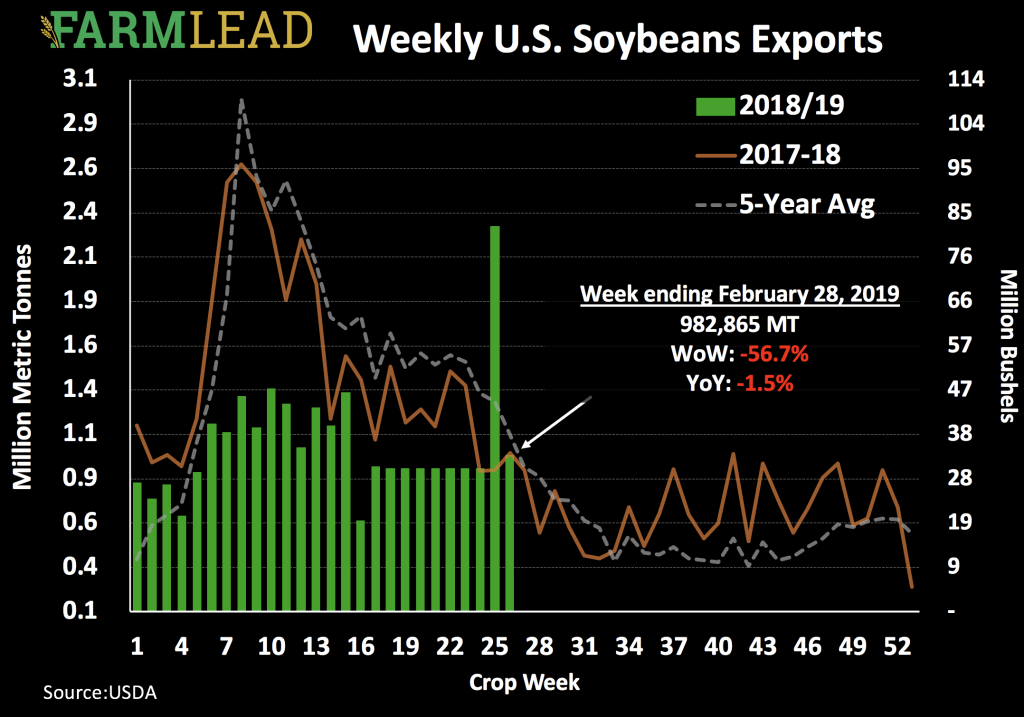 For the week, soybean prices in Chicago lost about 16¢ with the May 2019 contract closing below $9 USD / bushel for the first time in months. New crop soybeans on the November 2019 contract closed at $9.305. Ultimately, this week seemed to be the one that a sell-off was based in a lot of talk about a trade deal between the U.S. and China happening, but not a lot of action.

That being said, the market is getting a little more faith in China in terms of buying American soybeans as it was confirmed that they bought at least 500,000 MT on Thursday. Stepping that up though, there are some birdies flying around saying that China will buy 2 MMT of US soybeans. It’s not clear if this is in addition to the 500,000 MT bought this past week or the 10 MMT of soybeans that China said they’d buy back on February 22nd. In fact, in last week’s sales and exports data, you can see for yourself in the chart above the big numbers from the USDA in terms of actual shipments.

Switching oilseeds, canola prices continue to be languishing with the May 2019 contract now down over $25 CAD/MT over the last 2 weeks. Canola prices have been negatively impacted by China, namely, their feedstuff needs dropping and politics surrounding the detention of Hauwei CFO, Meng Wanzhou. On the latter, we saw Richardson International lose its approval to ship canola to China this week, which is seemingly more and more political than it is about the “hazardous pests” that the Chinese claimed to have found in their boats.

On that note, Canadian canola exports are still tracking more than 6 per cent behind last year’s pace with 5.8 MMT shipped out thus far through Week 31 of the 2018/10 crop year. 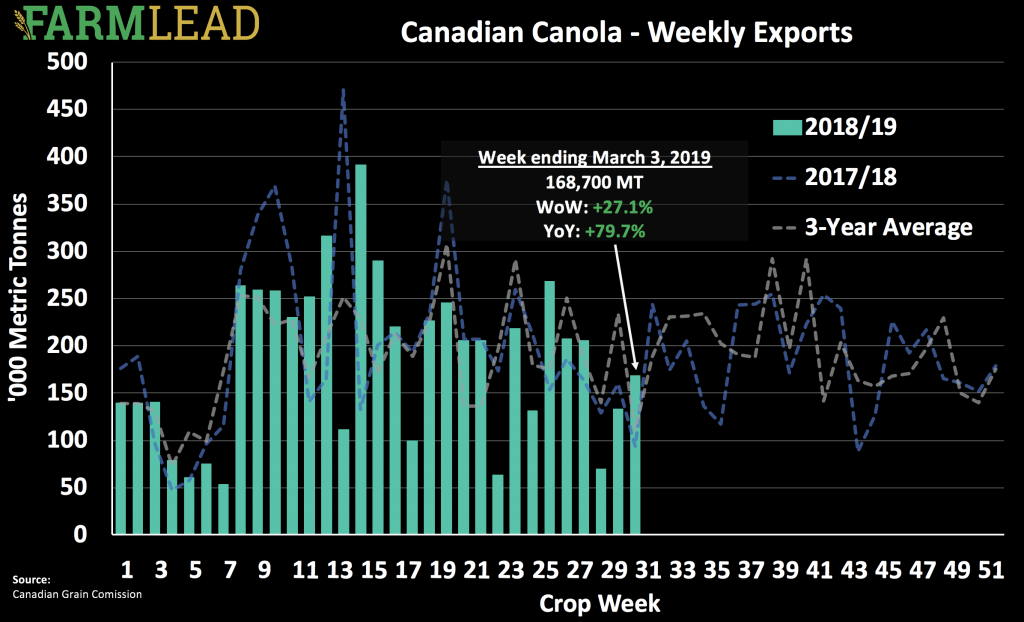 There was nothing really too much that changed on the wheat balance sheet in the March WASDE either. Russia’s wheat exports were stayed at 37 MMT but late last week, it was noted that Russia should have plenty of available wheat (5 MMT) to continue to be competitive in the international market. Thinking into 2019/20, Russia’s Agriculture Ministry says that the country will expect to harvest somewhere between 75 – 78 MMT in this next year’s wheat harvest of between 75 – 78 MMT. They did mention, however, that they are optimistic spring wheat conditions, the number could reach as high as 80 MMT.

Something more important than the USDA’s numbers for wheat markets this week was from ABARES in the Land Down Undaa. This past week, the Aussie agency estimated that their 2019/20 wheat harvest would come in at 23.9 MMT, a 38 per cent jump from this past year’s drought-riddled 17.3 MMT haul. The latter number was actually raised by ABARES by 400,000 MT from their last forecast in December. 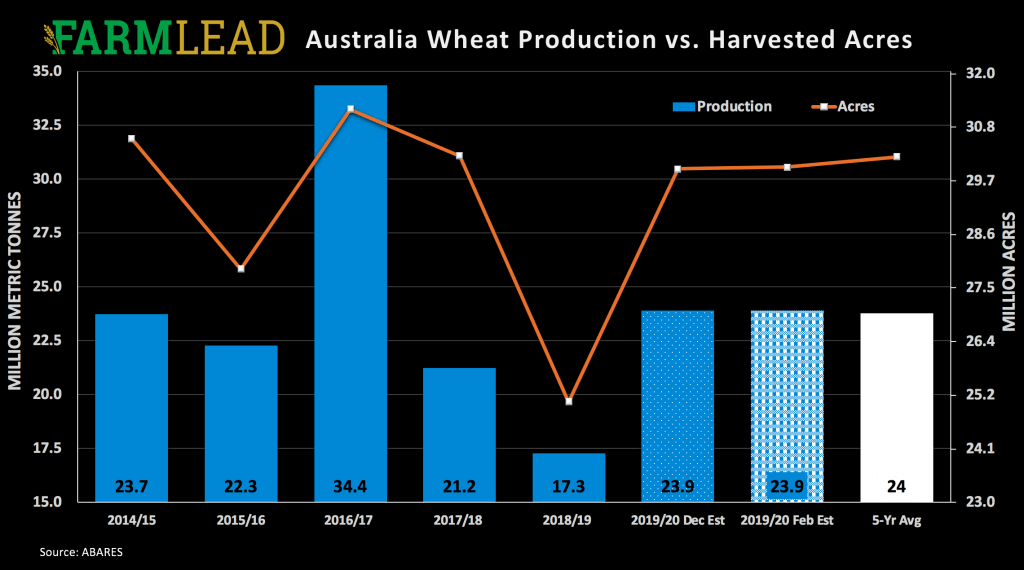 The immediate question I’m asking about this forecast though, is “how?”. As mentioned in last week’s RealAgriculture column, the weather in Australia is scorching hot and it’s expected to continue through their fall season. On the export front, ABARES is expecting Australia to export 14.2 MMT of wheat in the 2019/20 crop year. This would be up 41 per cent from the 10.1 MMT forecasted in Aussie wheat exports for the 2018/19 season.

Overall, today’s March WASDE didn’t really do much to help reset the goalposts and so grain markets will easily defer to any action between China and the US, should something real materialize.