If you live in southern Saskatchewan, reporting crime in the area just got a bit easier. Residents in the south district (shown in the map below) will be able to use the new Saskatchewan Crime Watch Advisory Network to learn about criminal activity from the local RCMP detachment or to report suspicious activity in the area.

A person has to sign up and once they have, they can choose how they would like to get advisories by Mounties: text messages, emails, or phone calls. 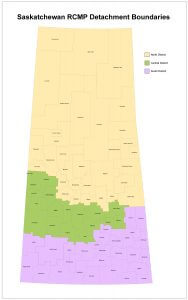 “When an RCMP detachment becomes aware of an incident or crime, they can issue an advisory via the system and local residents who have signed up for the program will become aware of what happened,” says Saskatchewan RCMP Commanding Officer Assistant Commissioner, Mark Fisher.  “Equipped with this information, citizens will be in a better position to provide tips and information to their local RCMP.”

The Government of Saskatchewan is providing approximately $50,000 for the RCMP to initially launch this system in the southern part of the province for 18 months.  The RCMP says it will evaluate the effectiveness of the program after the time has passed and will look at eventually using the network across the entire province.

“There’s a few things we’ll look at in the evaluation phase, one obviously being the uptake of the program as far as how many citizens sign up, the level of interest in the program as well as what we hear in feedback from the communities,” Fisher says.

“Lastly, and perhaps most importantly, we’ll be looking for success stories on how this tool allowed us to engage earlier, to focus our investigations and our response to crime in communities and I think that’s where we’re going to see a significant benefit from a policing perspective in our ability to focus (on) crime if we get tips in a timely manner.”

Fisher adds in this era of social media, the network will allow the RCMP to get out information that is timely, credible, and informed. He points out it should help douse rumours spread online as well.

“We want rural residents to feel safe in our communities,” says Ray Orb, president of the Saskatchewan Association of Rural Municipalities. “With the reinvigoration of Rural Crime Watch Associations in the province and the addition of the Provincial Protection and Response Team, this mass notification system adds to the basket of tools and peace of mind for our members.”

The first green revolution of the mid-1900s included the discovery and advancement of fertilizer and crop protection that led to such incredible gains in food production that it spurred a population explosion and massive growth of cities. The next green revolution needs to be just as significant, but with a different end result: more food,…