As Nufarm plans to expand its growth throughout the Canadian crop protection market, the company announced Boyd Bergstrom will take on the role of country lead for Canada. Effective this month, Bergstrom took over the role from 30-year Nufarm veteran, Lachie McKinnon who will be returning to Australia. 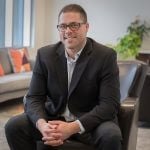 Bergstrom joined the company back in 2007 and quickly advanced to his most recent position of western Canada sales manager. He holds a Bachelor of Science in Agriculture and has a Certified Crop Advisor and Professional Agrologist designation.

“I couldn’t be more honoured to help lead this great team as we continue our rapid evolution as a provider of best-in-class agronomic solutions to Canadian farmers,” Bergstrom says in the news release.

He will relocate his young family from Saskatchewan to Calgary, Alta. to work from the head office. He adds he’s looking forward to the opportunity to leverage his sales and field management experience in supporting the Nufarm commercial team in achieving year-on-year portfolio growth.