Grain markets worked through the third week of March with weather headlines drowning most of the Chinese trade issues in the U.S., but it was the opposite in Canada. In outside markets, global stocks and bond yields fell on Friday as fresh data points have amplified some thinking about a weakening world economy.

On Thursday, the Canola Council of Canada announced China has stopped its purchases of all canola products from the Great White North. This is significant as the People’s Republic represents the largest single market of any of Canada’s crops; in 2018 this amounted to $2.7 Billion CAD in canola seed exports, about $1 Billion in canola oil shipments, and roughly $500 million in canola meal. Canola prices were on track to make about a 1% gain on the week, until they dropped more than $14 CAD/MT on Friday, which represented a 2.3% decline in terms of weekly performance.

The impact was also felt on new crop contracts, with canola prices down sharply. This might’ve have been also to do with updated balance sheet expectations from Agriculture and Agri-food Canada (AAFC) as the agency dropped 2018/19 exports by 1 MMT from its February estimate to now sit at 9.8 MMT. This meant that 2018/19 canola ending stocks were raised by the same amount to now sit at 3.5 MMT.

Put another way, the AAFC has finally accounted for the fact that Canadian canola exports have not been meeting expectations. Through Week 33, Canadian shipments have totalled 6.03 MMT, down 8.5% year-over-year. 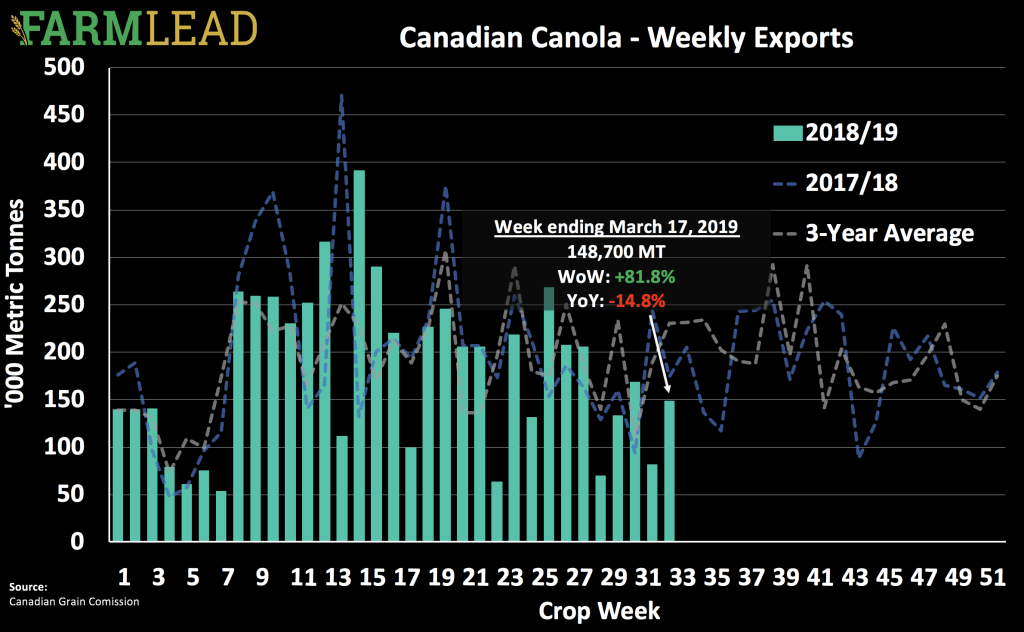 With the lower exports and greater carryout, AAFC acknowledge the impact on the 2019/20 crop year by dropping this spring’s acreage by 865,000 to 22.24 million. This would equate to production coming in at 19.75 MMT. Overall, there’s two things that we’re starting to hear from FarmLead users. First, canola contracts that producers are supposed to be delivered on are being “suspended until further notice”, which creates a fear of those contracts might be canceled outright which could have a significant impact on cashflow at seeding time. Second, there is already some talk that other crops might be next on China’s list, notably peas, which we already know are being subject to harsher quality inspections.

Switching gears, this week the NOAA released its updated three-month forecast, indicating extensive flowing through the Red River Valley down to Nebraska and Iowa. Add in the expectations from the NOAA for above-average rainfall through June, one NOAA director literally said that “this is shaping up to be a potentially unprecedented flood season”. 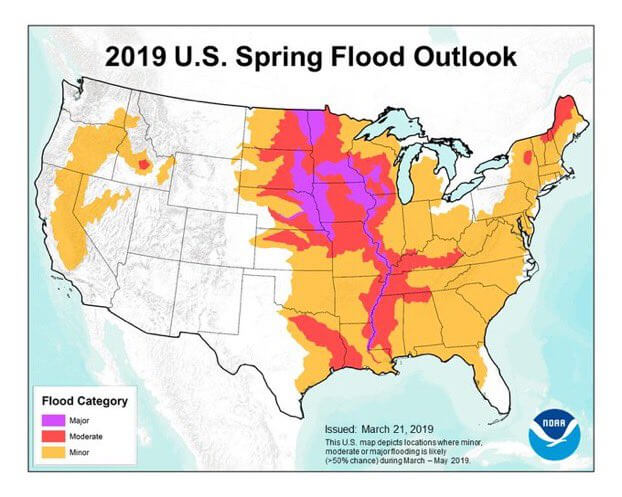 To say the damage caused to the Midwest already to date is significant would be an understatement. The expected bill to fix the damage so far from this month’s weather activity in Nebraska and Iowa alone are expected to top $1.5 Billion and $1.6 Billion USD respective! I and many others are expecting this number to climb as the rest of this winter’s heavy snowpack melts off. In addition to Nebraska and Iowa, Wisconsin and Mississippi have also declared states of emergency.

From a agricultural markets standpoint, these four states account for about a quarter of all major row crop production value in the United States, and nearly the same amount of livestock production value! We already know that railroads crisscrossing the Midwest that are covered with water will severely impact grain supplies getting to export and domestic end-user positions. On that note, this week’s exports report from the USDA showed that U.S. corn exports are slowing up a bit with 27.82 MMT shipped out through Week 28 of the 2018/19 crop year. 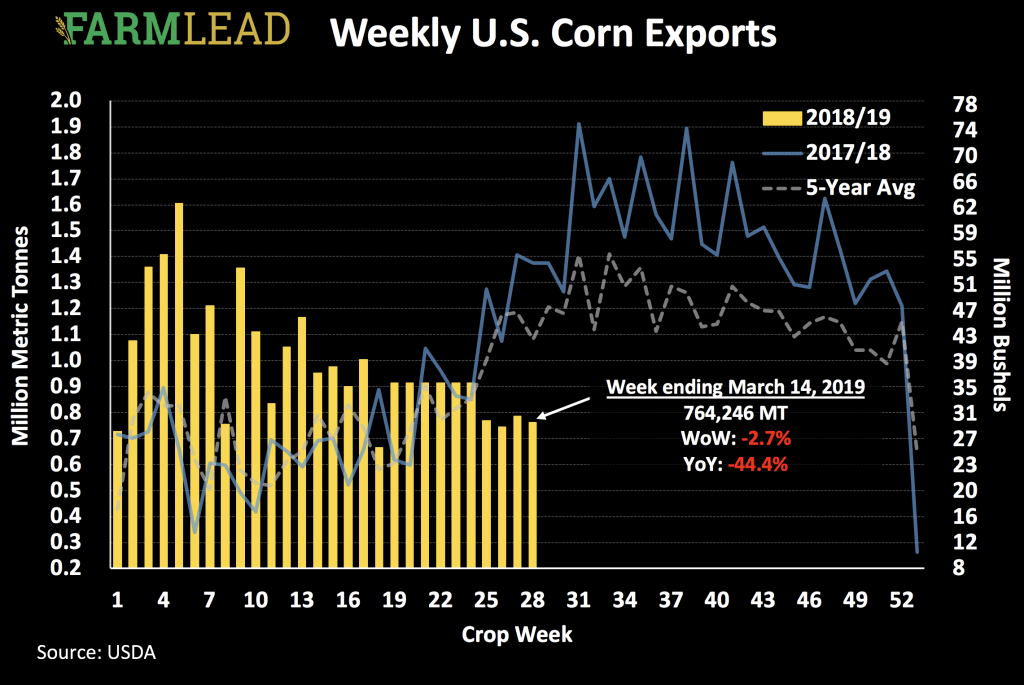 However, it was confirmed on Friday that COFCO, China’s state-buying grain agency, bought 300,000 MT of U.S. corn. This was the first time that China has bought this much American corn in one shot in a really long time, and certainly seems related to Beijing trying to showcase some good will towards better trade relations.

U.S. wheat exports are picking up a little bit, with 17.37 MMT (or 638.2 million bushels), now shipped out through Week 41 of its crop year. Worth mentioning is that Brazil is opening up its doors to duty-free wheat imports of up to 750,000 MT (or about 27.6 million bushels). However, this comes as this year’s wheat crop in Brazil is looking pretty good, not only from a crop development standpoint but also on the balance sheet.

For soybean exports, things are still relatively slow-moving as long as China isn’t at the table. It’s expected that the U.S. and China are pushing for a new round of trade talks with a goal to have a deal signed, sealed, and delivered by late April. If that’s the case though, this would likely be on the late side of things for American farmers who have opted to plant wheat – namely in the Northern Plains – switch back over into soybeans. Of course, as I’ve mentioned many times over the past few weeks, the wet weather that we’re seeing could easily push back the start of Plant 2019.

Worth mentioning is INTL FC Stone’s most recent acreage estimates for Plant 2019. They’re forecasting corn acres seeded in the U.S. will come in at 90.4 million while soybean acreage will only drop to 87.7 million. For the record, out of all the estimates available, this is the highest number for soybeans and the lowest for corn.

Ultimately, in the U.S., grain prices are thinking more and more about this volatile weather’s impact on new crop prices, as well as the potential for the trade war with China ending. Conversely, weather isn’t being thought about too much in Canada, but instead, whether a trade war with China is just starting or not.

A pivotal November ahead — this week in the grain markets

Waning and Whining — This Week in the Grain Markets

Tough Inclinations — This Week in the Grain Markets