Less than two months into a pilot project, Saskatchewan RCMP have announced it will be expanding its Crime Watch Advisory Network. The project first came online near the beginning of March this year and was offered only in the southern part of the province.

Due to a lot of interest across the entire province, the RCMP expanded the network to cover central and northern Saskatchewan, as well.

“People are the eyes and ears of a community,” Battlefords MLA Herb Cox says on behalf of Corrections and Policing Minister Christine Tell.  “Every new person who signs up for the program boosts the reach of the network, allowing the RCMP to more effectively communicate with rural residents about crime in their area.”

“SARM is encouraged by the expansion of the Crime Watch Advisory Network,” says Ray Orb, Saskatchewan Association of Rural Municipalities (SARM) president. “Crime prevention is key in ensuring our rural communities are a safe place to call home, and it takes all of us working together to do that.” in a news release. 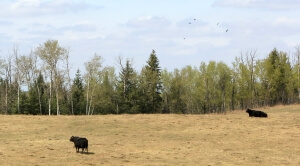 Beyond Scavenging: When Ravens Prey On Livestock

Note: There are a couple of rather graphic pictures in this post. Audio included at the end. Losing an animal to any sort of predation can be incredibly difficult to stomach, and a lot of times completely unexpected. The scenes we typically imagine in the wild are those of peace, where cattle low, birds sing,…Read more »

Health Canada Proposes 3-Year Phase Out of Imidacloprid, a Neonicotinoid