Grain markets were served up another monthly instalment of the World Agricultural Supply and Demand Estimates (WASDE) this past week by the USDA, but if you didn’t know that, you might’ve missed it. The report came out as mostly expected, which was bearish, and since there weren’t too major surprises in this WASDE report, I’ve officially labeled this WASDE as “dull”. 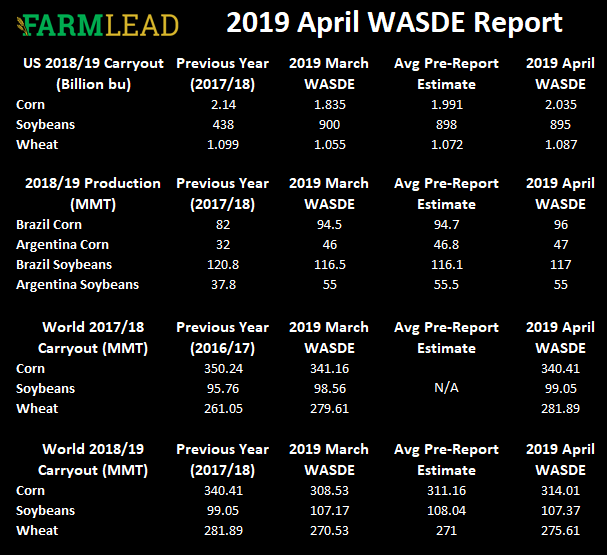 At a high level, stocks for all crops were raised globally, albeit domestic U.S. soybean inventories did drop a little bit. There wasn’t much movement in wheat other than Argentina’s exports being lowered by 500,000 MT to 13.7 MMT and the EU’s raised by 1 MMT to 24 MMT.

The USDA also raised the production expectations for the soybean harvest in Brazil and Argentina by 500,000 MT and 1 MMT respectively. This puts the expected haul from these two major players at 117 MMT in Brazil and 55 MMT in Argentina. While this was expected in this WASDE report, the more interesting upgrade was the USDA’s attaché down in Brazil who suggested that the 2019/20 soybean harvest (not this year but next year) could reach 124 MMT. This is a function of a rebound in soybean yields from the current drier year, as well as acreage expanding 1% year-over-year to 90.2 million acres. As a reminder, in their Prospective Plantings report, the USDA said that American farmers will plant 84.62 million acres for their 2019/20 soybean harvest.

The Buenos Aires Grain Exchange matched the USDA’s estimate of the soybean harvest this week, but Rosario Grains Exchange says that the possibility of the soybean harvest reaching 56 MMT is very likely as mild weather over the last month has brought in above-average yields. Technically, the soybean harvest in Argentina is a bit behind its normal pace but the yield monitors are, on average, reading 62-64 bushels per acre so far. On the corn side of things, the forecasters at Rosario also think that corn production in Argentina could bump up to 48 MMT. All this means is added competition in the game of global grain trade.

Staying in oilseeds, the USDA reduced Canadian canola exports in yesterday’s WASDE report by 1 MMT, acknowledging the current trade riff with China. This puts total 2018/19 canola shipments at 10.6 MMT according to the USDA, but that’s still 800,000 MT more than Agriculture Canada is currently forecasting! The USDA, like others, do not think that the shortfall in canola exports can be made up by demand from other countries. They point to competition from a large number of soybeans available in the world and some slower demand this year from players in Asia, Mexico, and the U.S. itself. 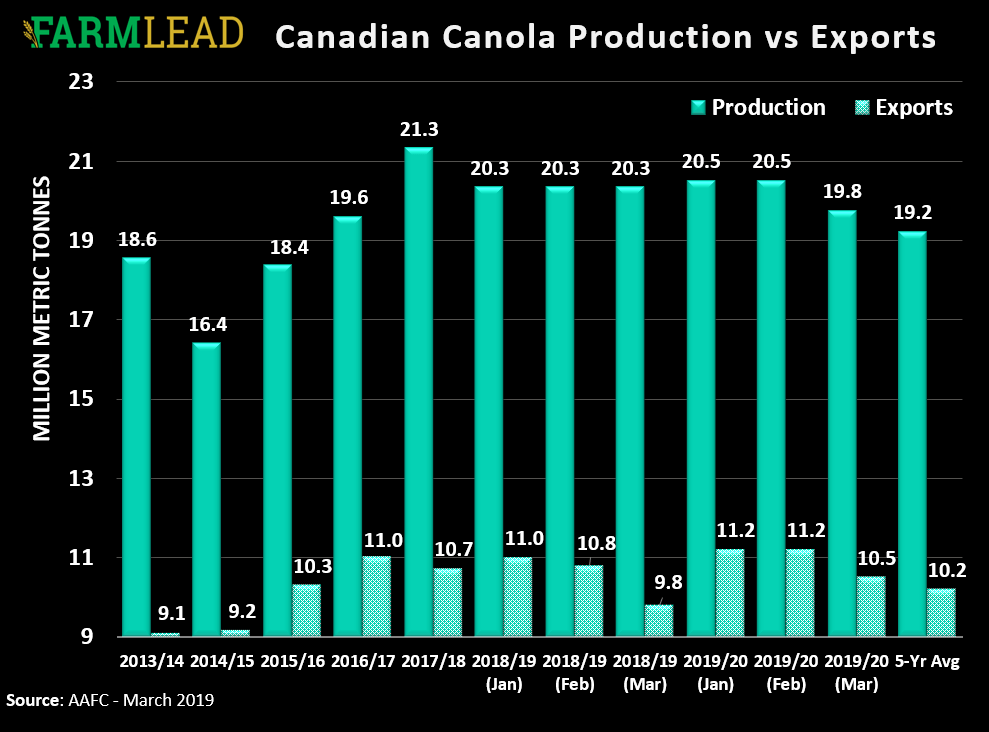 The flipside of this is that the USDA lowered its estimate of Chinese canola imports by 900,000 MT to 4.4 MMT for the 2018/19 marketing season. That being said, the USDA did raise Chinese imports of palm oil, sunflower meal, and rapeseed meal by a combined 725,000 MT to help offset this reduction in canola imports. Stepping into the hard facts though, through Week 36, Canadian canola exports are tracking 7% behind last year with 6.58 MMT shipped out.

While the USDA said that Brazil will produce 96 MMT of corn in the 2018/19 in the April WASDE report, there is some buzz down in South America that Brazil could produce a 100 MMT corn crop this year. The safrinha corn crop there was planted just after the early soybean harvest finished, and combined with some decent weather, AgriCensus is reporting that a 74 MMT second corn crop is possible. Granted, good weather in April and May is needed, if realized, it would be the largest ever for Brazil’s second corn harvest.

For knowledge purposes, most of Brazil’s first corn crop goes into the domestic feed market, with the second crop competing with U.S. exports as its crop year campaign winds down. That being said, through Week 31 of the U.S. corn crop year, just over 31 MMT has been exported, good for nearly 19% better than the same time a year ago. As you can tell in the chart below though, usually we see U.S. corn exports remain pretty consistent, but with a record safrinha harvest in Brazil, and a decently-sized crop in Argentina, some serious competition is being factored in. 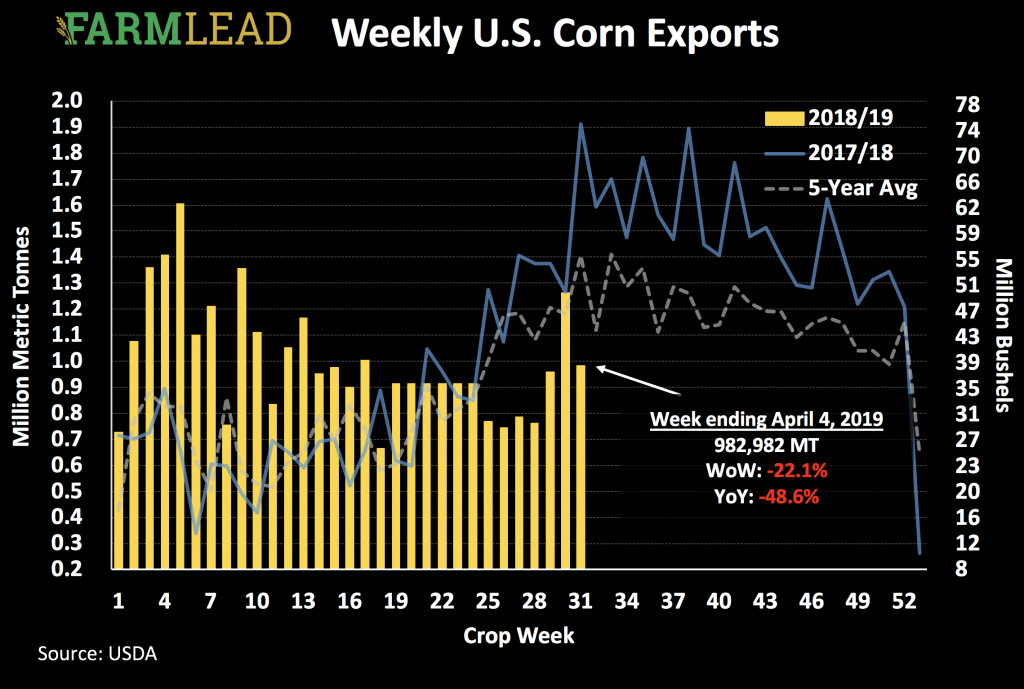 All things being equal, weather conditions across major growing states in the U.S. is back on traders’ minds with this WASDE report out of the way. This past week, we saw a second “bomb cyclone” blizzard roll across the Northern Plains and part of the Midwest this week, providing further havoc to areas still pulling themselves out of the flooding. Between 1 to 2.5 feet of snow was expected to fall in Minnesota and North Dakota, while Illinois and Indiana were expected to receive severe thunderstorms.

The storm has also brought some colder temperatures and it’s possible that freezing temperatures across many southern states and the Ohio Valley that could break some records this weekend. The cold air though will delay melting of the snow and drying up of fields, which basically translates into spring fieldwork being practically nil next week. The expectation though is for some drier weather across the major crop-growing regions of the U.S. as soon as we flip the calendar into May.

All things being equal, it’s a bit early in the Plant 2019 campaign for weather premiums to start popping into grain prices. Historically speaking, we know that, when there’s a window to plant, a lot of area gets covered very quickly. Simply put, we shouldn’t necessarily be looking for weather premiums to propel grain prices higher for at least a few more weeks, if not a month. In the meantime, the market will be comparing field conditions to past years to understand if there is, in fact, a bullish Plant 2019 scenario for grain prices thanks to this late spring, wintry weather. Should there be a weather rally in May or June, do you know where you’d pull the trigger on old-crop or new crop sales? Reminder: it’s good to have a rational plan in place before it’s too late and you’re left only acting on emotion.

Grain Prices Drift Lower on Production Estimates in the US & Canada