To start the new month, grain markets are mostly able to retain their gains for the week, albeit Friday, April 5th was a mostly down day for the complex. For the week, Minneapolis hard red spring wheat was the biggest loser while oats led the complex in gains (what do oats know, though?) For HRS wheat, no support has been ale to be found from a technical standpoint, and there’s buzz that more spring wheat will get planted in Western Canada this year instead of canola, thanks to political issues.

The retreat was in part a function of lingering knowledge of just how much grain the USDA said is still available in the U.S. and no trade deal between the U.S. and China. On the latter though, this week saw the ninth round of talks in Washington, culminating with President Trump meeting China’s Vice Premier Liu He at the White House.

President Trump was optimistic that they “are rounding the turn” but the main sticking points are that American companies can wholly own China-based businesses and China would have until 2025 to meet its commodity purchasing commitments. The goal for the U.S. was to complete the trade war negotiations by the end of April, but there is some speculation that if something can’t be figured out this month, talks could be extended all the way out to the end of June when the G20 meets in Japan.

Staying in trade talks, there are more skeptics than ever for seeing the new NAFTA trade deal – USMCA – get ratified this year, let alone ever! Part of the reasoning behind this is that U.S. Democrats want to re-open negotiation on some areas while Canada is expecting steel tariffs to be removed.

Coming back to grain markets, back in the People’s Republic, the full effects the wide-sweeping African Swine Fever are starting to be realized. INTL FC Stone says that the size of the hog herd has been drastically understated, suggesting that at least 30% of animals have been lost. From a pure animal numbers perspective, this 30% would be the equivalent of all the hogs fed in Brazil, Mexico, Canada, and the United States combined!

Ultimately, the reduced herd size means roughly a 22 MMT reduction in soybean demand. While China has committed to potentially buying more American soybeans in a trade war compromise, there is much speculation that these beans could just end up in reserve silos and slowly be sold back into the market sometime next year. This inherently implies that demand for soybeans might be soft, even with a trade deal, and thus, soybean prices might not benefit as much as one has been hoping for.

Conversely, the USDA’s attaché in Beijing noted this week that oilseed demand is expected to rebound a bit in 2019/20 after a slowdown in this current crop year. Total rapeseed production in the People’s Republic in 2019/20 is forecasted to reach 13.1 MMT off 16.3 million acres seeded. On that note, total rapeseed/canola imports by China in 2019/20 are estimated by the USDA at 5.7 MMT, of which Canada is supposedly going to own about 93% market share.

Some interesting datapoints worth pondering: through February 2019, Canada had exported 2.025 MMT of canola to China in the 2018/19 crop year, including a monthly record in January of 602,000 MT. However, it’s been suggested that other than Canadian canola exports to Japan being steady, canola exports from the Great White North to all other markets are down 37% year-over-year. This includes canola exports to the U.A.E., Pakistan, and the U.S. down a combined 50% compared to the same time a year ago. Will those other countries to buy more Canadian canola if a U.S.-China trade deal was found and COFCO and company started buying more American beans? My gut says that’s very questionable. Aggregately, total canola shipments this year have topped 6.4 MMT, but that’s nearly 8% behind last year’s pace. 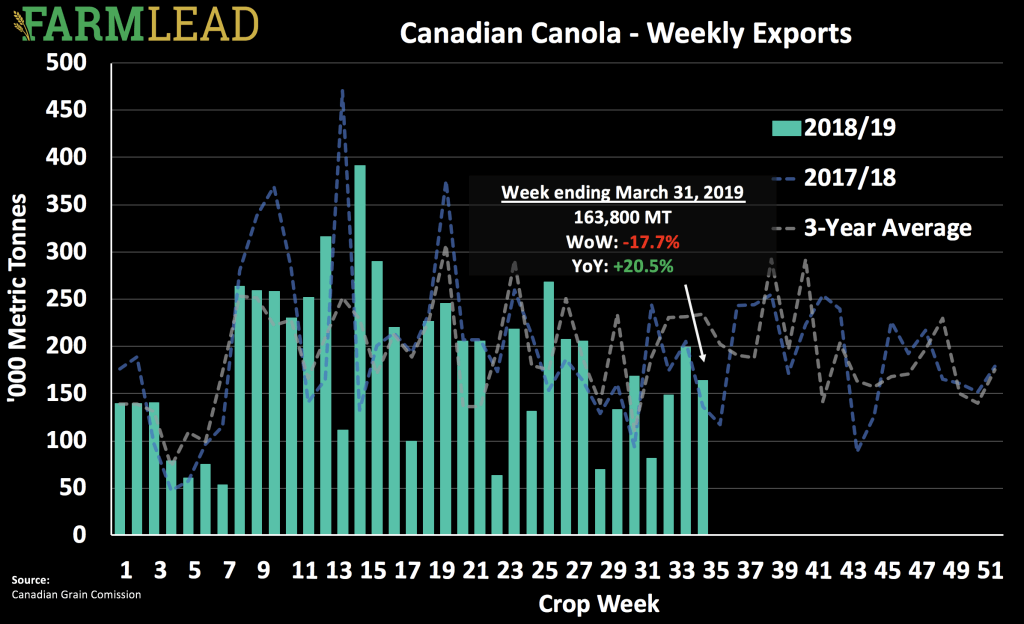 Staying with some bearish facts, Buenos Aires Grains Exchange in Argentina recently raised its estimate of the soybean harvest there to 55 MMT. Their report yesterday suggested that yields in the central Pampas farm belt were well above the norm, averaging nearly 64 bushels per acre!

Separately, Informa Economics bumped their estimate of the Argentina corn crop by 1MMT to now sit at 46.5 MMT. Informa also increased Brazil’s corn harvest by 500,000 MT to 94.5 MMT. Comparably, the USDA forecast for corn harvests in Brazil and Argentina back in the March 2019 WASDE report was for 94.5 and 46 MMT respectively.

That said, there are some analysts who are already getting a bit bearish on corn prices with respect to next Tuesday’s April WASDE report as well as the potential for a big harvest down in South America. This, combined with the higher inventories shared with us last Friday by the USDA and the expected slowdown in exports and ethanol production, there’s a weaker tinge to corn prices. However, keep in mind that speculators are sitting on a near-record short position, providing some fuel for a short-covering rally if there is a bullish surprise. 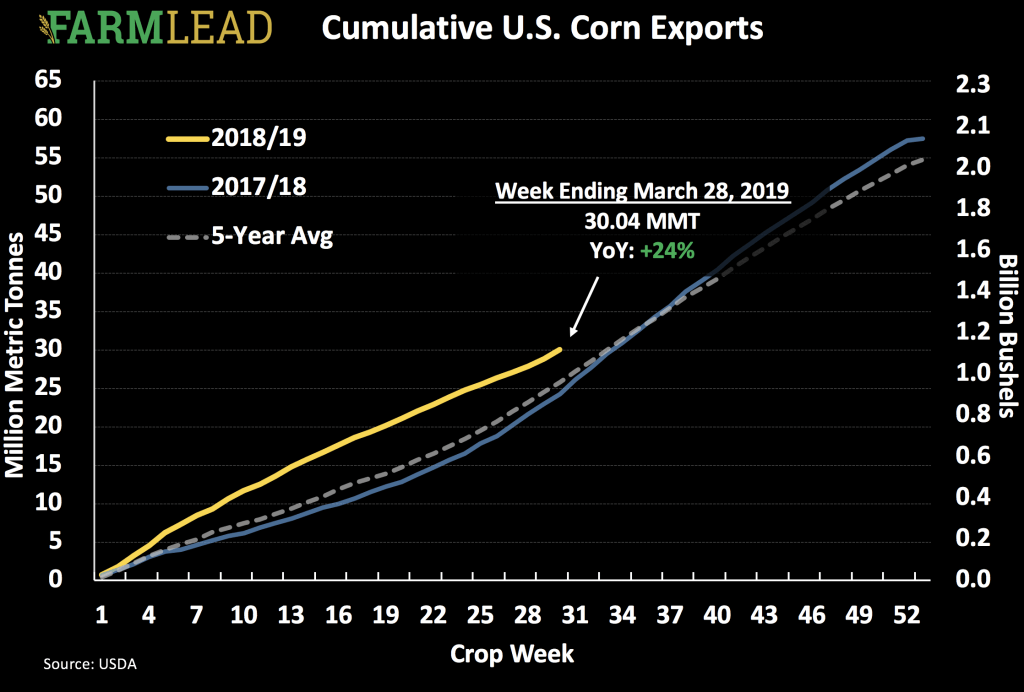 Flipping over into pulses for a moment, pulse crop organizations are saying that shipments are still flowing to China. That said, the USDA is forecasting that China will import 2.1 MMT of peas this year, up about 10% from the 2017/18 crop year. The main driver for the expansion in demand has been for the feed sector as peas have become more affordable since India put heavy import duties on peas. Simply put, livestock producers in China have been happy to snap up Canadian peas while India tries to figure out its trade policies.

On that note, I’ve said many times that it’s unlikely that India will relax its import taxes on pulses unless there’s a production issue in the country. This winter, during the rabi crop growing season, we saw well below-average precipitation across some of the major growing regions in India for pulses. Case in point, a study from February suggested that at least 50% of the country is already facing drought, with at least 16% of the nation in the “exceptional” or “extreme” category.

On that note, Canadian pea exports are tracking nearly 11% higher year-over-year through Week 35 of the 2018/19 crop year, but well below the pace set in 2016/17 or 2015/16. As mentioned, China has made up for the bulk of these pea exports but we know that countries in the Black Sea are becoming a go-to option in July and August as their harvest starts earlier than North America’s. 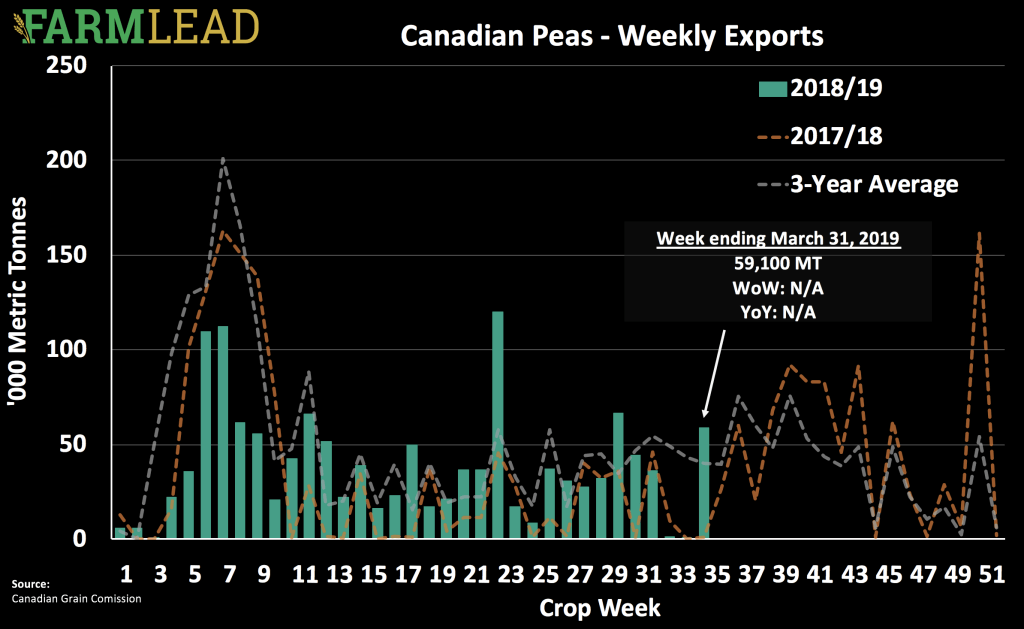 Coming back to the weather, there’s been a suggestion by the world’s forecasters that the current “weak” El Nino conditions could persist for another 2 months. For India, the monsoon seasons starts in June and lasts until September and anything but a full amount of precipitation might not be enough to help produce not only a kharif crop, but also a rabi crop next winter. Should those rains not materialize, and the production of pulses in India suffers, I’m confident that you’ll see import tariffs on peas, lentils, and chickpeas relaxed. Once again though, Mother Nature holds the cards.