It’s spring and that means it’s farming time across Canada. StatsCan has released its March seeding intention report for 2019 to give an indication for of how acres could possibly change for 2019.

In Western Canada, the battle for acres has several more competitors than in Ontario and the U.S. Midwest, so winners and losers are more spread out. This year’s intentions have several variables impacting intentions and we’ll likely see further acres movement once the final seeded report is provided later in the year. Whether it’s drought, disease pressure, the 2018 harvest hangover or trade issues, Canadian growers have some tough decisions to make.

Many people reviewing this report will jump to the canola number first based on the trade issues with China currently underway. There was speculation from analysts that acres would drop 5-10% and StatsCan agrees stating a 6.6% drop in canola acres to 21.3 million acres.  Alberta is expecting a 10.6% drop but drought concerns in Southern Alberta and clubroot concerns in northern Alberta are contributing factors — it’s not all about China.

After the disastrous harvest of 2018 which saw many Ontario growers facing unprecedented DON levels, corn acres will be up 4.6% nationally. In Ontario, growers  plant a record 2.2 million acres which is 3.3% higher than 2018.  Quebec growers plan to plant 4.4% more and Manitoba growers will plant 1.7% less corn acres in 2019.

Canola is no king on the Prairies as the national wheat acreage is expected to be 25.7 million acres, up 3.8% from 2018. Spring wheat leads the charge higher with an increase of 12%, while winter wheat is up nationally by 2.2%. The biggest acreage loser is durum which is expected to drop by 18.8% based on poor market conditions. As new reports come out through the summer, watch the winter wheat acreage in Ontario as it will likely decline due heavy winter kill.

After record soybean yield in Ontario and drought based yields on the Prairies, nationally Canadian farmers intend to plant 10.7% fewer soybean acres, lowering the total to 5.6 million acres. Even with those record soybean yields in Ontario last year, growers in the east intend to plant 3.8% acres while Quebec growers will plant 7.6% less according to StatsCan.  Although Manitoba acres are expected to drop 319,000 acres, it’s our estimation that the percentage drop in Saskatchewan will be higher due to drought but that number is not available at this time.

Peas and lentils have been mired in trade issues with India for the past two years but other markets, such as China, have stepped up on peas to deal with potential supply issues. At the same time, plant protein has been all the rage but that hasn’t translated to increased pulse acres yet. Lentil acres are expected to be down 9.6% to 3.4 million acres, Chickpea acres are expected to be down 24.5% to 334,000 acres and field peas are up 11.6% to 4.0 million acres.

We will have more analysis thoughout the week on the report.

See the table below for a further breakdown 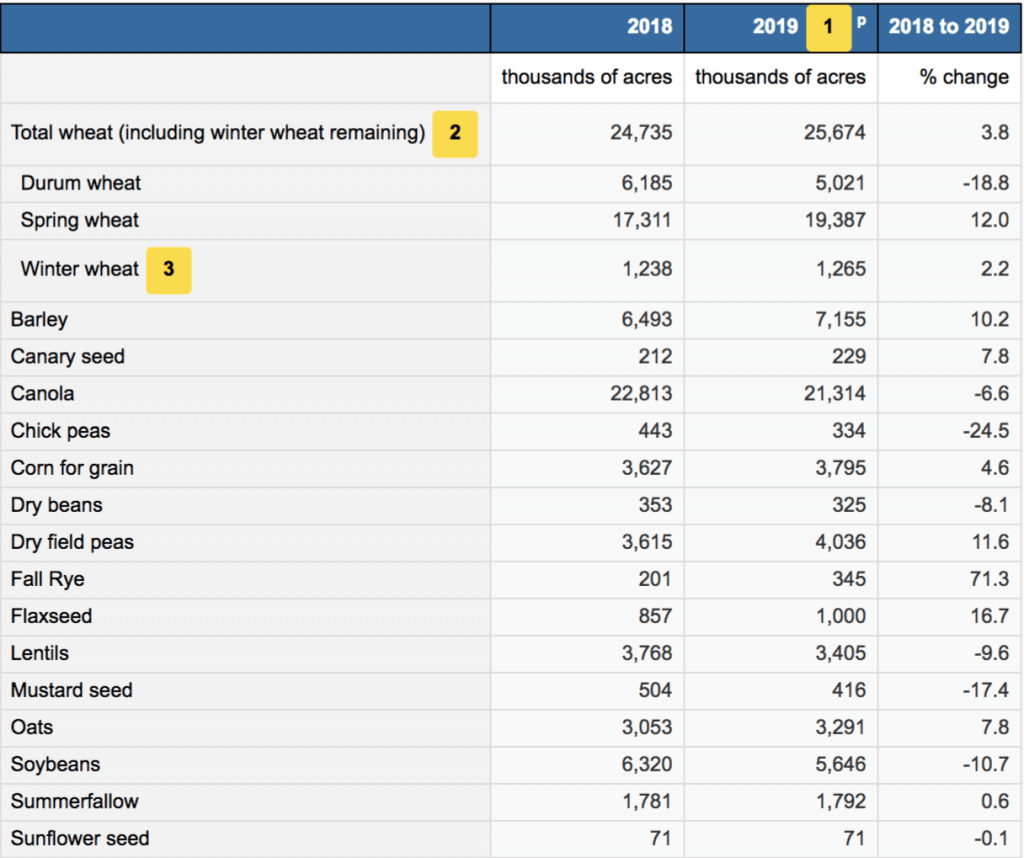 RealAgriculture is hiring a field editor!